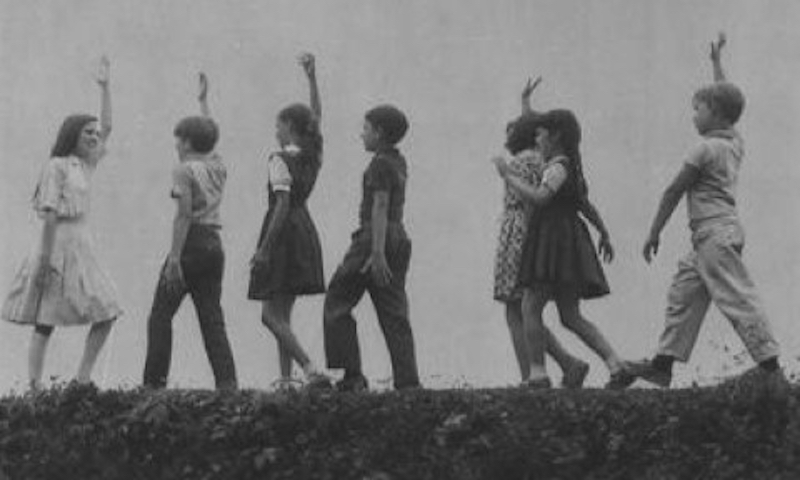 Mrs. Forbes (Kathryn Hays) hears the alarm. She sees a letter in a series of squares, and it beeps and lights up. She’s the secretary to the principal of a grade school in a rural area somewhere in America in 1962 – and she’s pregnant. A thin woman well into her pregnancy she moves with ease but, with that child growing inside her, she seems extra vulnerable. Just the vision of that pregnant woman in her dress and the alarm and the light and her concerned face – already we feel creeping dread.

The day did start out somewhat nice – chatting with another teacher and a little boy already sent to the principal’s office so early – she appears to be starting the morning like any other. Mrs. Forbes is kind to the little boy, Joel (Miles Chapin) who was supposedly bad (he seems more like he’s been picked on), and that makes us like her. One woman (a kitchen worker) gives him a treat before he trudges to the principal’s office. She says: “When you’re in trouble, it helps to have a cookie in your pocket.” How moving that gesture seems before what will unfold, and how extra poignant it is when we walk through the entire movie -- Frank Perry’s Ladybug Ladybug (written by his then-wife, Eleanor Perry, whom he worked with frequently, and adapted from a short story by Lois Dickert).

And we really do walk through the movie – with those kids, with a teacher. So much that, we, too, begin to feel flustered and exhausted and worried. That cookie could offer such comfort – not just for the sweet taste, but for the soothing memory from the adult, the idea that this adult, this person in charge, thought you deserved it, even if you thought you may have done something bad; and especially if you thought something bad was going to happen to you.

But why should these kids feel so guilty or bad or punishable? It’s the adults who create this kind of chaos in the world. They even later vote on it – they don’t want any kind of war.

These kids – with varied levels of worry – some calm, some distraught – suspect something bad is going to happen to them. And it grows and grows and grows…. 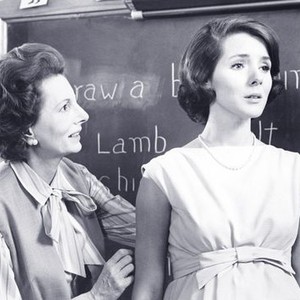 So, when the alarm goes off, Mrs. Forbes doesn’t panic; she just isn’t sure if it could be serious. It feels like something. She rushes to Mr. John Calkins (William Daniels), the school principal. He inspects what is going on – and they have to take it seriously. They have to evacuate the school. This could mean … a nuclear attack is about to happen. Given this time period (the film was released in 1963, after the Cuban Missile Crisis), it’s not paranoia to worry. But, no one totally believes it, right? At least they don’t want to – at first. They round up the kids in groups and select teachers to walk those kids back to their homes (Mrs. Forbes and Mr. Calkins stay at the school).

This begins Ladybug Ladybug. A beautiful, haunting, at times terrifying picture, it’s powerful and all-so-human to this day. This was the second film Frank Perry made with Eleanor Perry after David and Lisa. They then took on The Swimmer (starring Burt Lancaster), a transfixing, potently allegorical and disturbing adaptation of John Cheever’s short story. The Swimmer was a stressful production. The direction was taken away from Frank (an uncredited Sydney Pollack shot the rest) but what you see is another expression of the couple’s lyricism and cynicism that, through the early 60s and up until 1970, made them two of the most unique and fascinating independent filmmakers of that time. Among their work, they also made Truman Capote’s Trilogy, and the moving and disturbing Last Summer (I wrote about the film here)– a complex film about troubled, confused young people, and one that takes place on a leisurely beach, but a weirdly empty beach. Grown-up kids from Ladybird Ladybird?

Their partnership ended with their divorce (Frank went on to make films without Eleanor, notably Doc, Man on a Swing, Rancho Deluxe, the great, incredibly underrated Play It as It Lays (which I wrote about here) starring Tuesday Weld in an incredible performance. He also directed the infamous, and I think, impressive and powerful, Mommie Dearest. Their last film together was one of their very best, Diary of a Mad Housewife, an especially lacerating portrait of matrimony, a dreamlike, almost mentally insane spell of both abuse and masochism.

Probing the sweetness and alienation and/or rot within adolescence and adulthood, or the challenges of childhood – particularly within the supposed stability of regular America or suburbia, or of marriage – you truly feel unsettled watching Ladybug Ladybug. The filmmakers take time with these scenes, they take care with these child actors (all of the actors from kids to adults are spectacular), never talking down to their characters, but never fearing to show how negative, even scary some can be (one in particular).

Ladybug Ladybug, with its stark, black and white cinematography, laced with lovely artful touches (there’s a scene on a hill that recalls Ingmar Bergman’s The Seventh Seal), feels dreamlike. A nightmare, in fact, but one that works as a direct story of fear (it was based on a real incident), and how the children and adults handle themselves. How quickly the veneer of childhood innocence, of safety, can be shattered. The look of uncertainty and sadness on Mrs. Forbes’ face as she walks through an empty schoolroom, picking up the tiny chairs, organizing the miniature pots and pans on the play stove, placing a tiny man and woman together, staring out the window adorned with paper children, is so beautifully realized, so mysterious, so sincere. 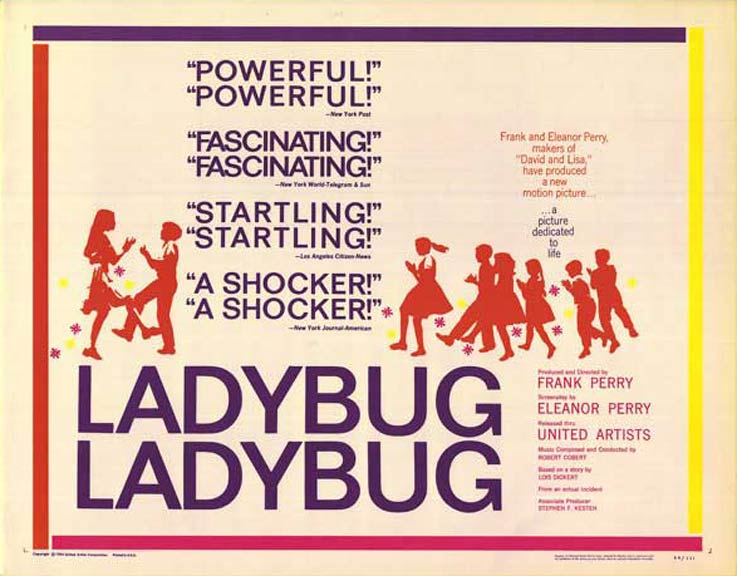 The woman slowly falling apart is Mrs. Andrews (Nancy Marchand), whom we follow as she leads one group of children to their respective homes in her uncomfortable heels. She walks with the kids behind, feet hurting, her face registering increasing amounts of dread and fear and sadness (when she is all alone, she is picked up by a truck driver who plays music loudly – and she laughs a bit but then settles into a look of absolute dread – she is incredible in this little moment). The kids talk – they wonder if the threat is real, some seem almost casual about it, others horrified. One little girl vomits on the side of the road – the poor thing bolts to her father’s work, and he acts like she’s a hysterical nuisance, then, when home, her mother says she has nothing to worry about. The girl grabs her pet goldfish, hides under her bed, as a dark shadow falls over her face. It’s heart breaking. Another kid goes home to grandma, who is suffering dementia or something like it – and they hide in the basement. He convinces her to come down by telling her it’s all play – “It’s called Hide-From-War-Game,” he says. Two other kids make it home and pray with their religious mom in the cellar – it feels more disturbing than soothing. Another little girl, Sarah (Marilyn Rogers) rushes home but mom’s not there. What to do? She’s got to find the rest of the kids. Where are they? 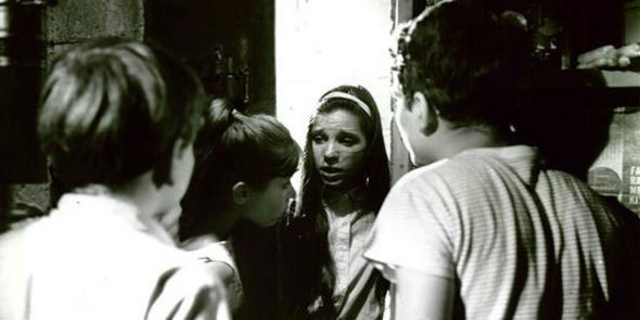 The rest of the kids are in bossy Harriet’s (Alice Playten) family bomb shelter, already dealing with Harriet’s demands and orders. We don’t entirely hate Harriet – after all she’s just a little girl – but we don’t trust her at all, we don’t like her, and she shows how inflexible and heartless some can become in moments of crisis.

Of these kids – we really focus on two of the older kids –Steve (Christopher Howard) and Sarah. Two sensitive kids, they are starting to develop a deeper connection, a first love, with one another. As they increasingly believe the world might be ending, their plan to meet next week for a date (she invites him over to listen to music) is something they are holding on to – seriously – and the actors register this in their faces so beautifully. When Sarah runs to the bomb shelter for safe harbor, Harriet won’t let her in, in spite of Steve’s protestations. Sarah is crying and banging on that door, but, nope, Harriet won’t allow entrance. It’s a chilling moment only softened when Steve runs out of the shelter, possibly risking his life to find Sarah.

And here’s the most haunting moment of the film. Nowhere to go, searching around the barren landscape, Sarah finds an abandoned refrigerator in a dumping ground. She climbs inside of it and closes the door. Steve runs right past it. He doesn’t know she’s in there. And we don’t know if Sarah is going to suffocate in that fridge. It’s a scene I will never forget. It’s a scene I watched with a friend who thought he’d never seen this movie before and that moment bubbled up in him, like a repressed memory. 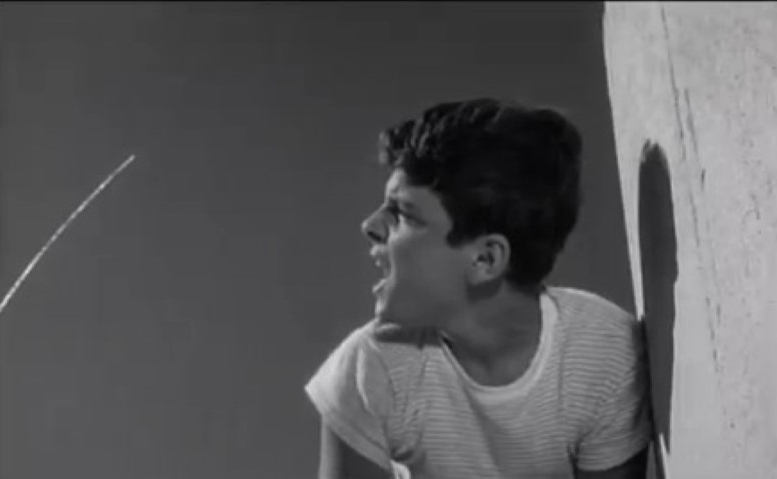 Characters are trapped in the Perrys’ films, literally, in refrigerators, or swimming pools, or in marriages and affairs giving no profound satisfaction or release. Burt Lancaster banging on the door of his empty house, as if he’s trying to break through to another consciousness or world (one he’ll never reach) while revealing how lonely and empty he feels, is a refrain in the Perrys’ work. Here, he and Eleanor are working more overtly within a trapped landscape – one of uncertainty. Most of the kids don’t know what is really going on and Steve, running to find Sarah, to find somewhere, sees a plane overhead, and, with fist clenched, yells, over and over, “Stop!”

You get the sense it’s not going to stop – the false alarm, yes, this will be known – but the fear of war? That’s going to linger and take those kids into the late 60s when some could be drafted into the Vietnam War, when some will grow up and follow orders or not follow orders, or not trust anything. There’s an interesting conversation that happens while the kids walk:

Brian: I wonder how it feels to see a dead person?

Sarah: I don’t want to hear about it.

Harriet: You have to face facts.

Steve: It’s not a fact! The bomb doesn’t have to come.

Harriet: Watch out who you’re telling to shut up!