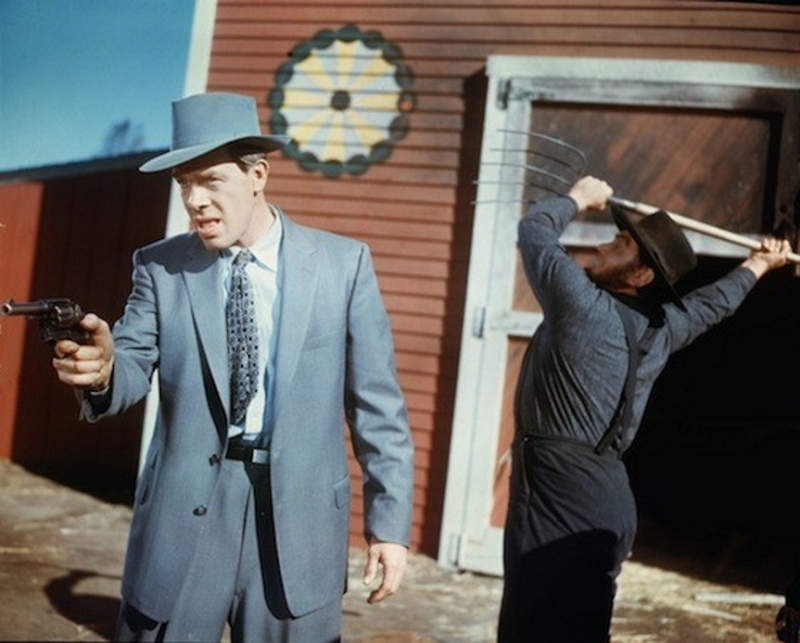 Regular small-town American life. Regular small-town American life in the 1950’s. What did that ever mean? The “regular” part? By regular does one mean purse snatching librarians, bank clerk window peepers, cheating wives, drunken husbands and little kids ashamed of their fathers for not serving in the war? Yes, that sounds about regular (it does).

And then Lee Marvin. (That’s not so regular because... who is like Lee Marvin?) But … Lee Marvin. Lee Marvin’s inhaler knocked out of his hand when a kid bumps into him on the street – and then the sharp-suited, blue hat-clad Lee Marvin cruelly presses his shoe on the kid’s hand when the little boy politely attempts to pick up the inhaler for him. “Beat it,” Lee Marvin says to the pained child.

To be fair regarding regular small-town American life and Lee Marvin, Marvin (as Dill), doesn’t live in the Arizona town of Richard Fleisher’s Violent Saturday (1955) – Dill is there for a nice little (violent) bank robbery he’s part of (with his partners, Harper (played by Stephen McNally), and Chapman (played by J. Carrol Naish). But even Dill reveals he’s attempted some kind of domestic normalcy (regular, again, whatever that is) – once. It didn’t take. In one of the best scenes in the movie, Dill wakes up the night before the robbery thinking too much about his life. Perhaps the town (of which we’ve been introduced to in just some of its domestic dysfunction – we’ll see more of it later) is getting to him. He walks (with an intriguing, strange sweetness) into Harper’s room clad in pajamas and talks about his past marriage while, perpetually stuffed up, he’s sniffing his inhaler (presumably, Benzedrine) – a fascinating detail here – that Dill is also likely a drug addict. He says, “I must have the heebie-jeebies or something, I can’t sleep.” After lamenting that their partner Chapman is “mean,” which is a little hilarious given how Dill treats children (later on cool-headed Chapman will give a clearly violence-fascinated kid a candy while he’s robbing the bank), Dill extends Chapman’s meanness to women:

“There’s nothing in this world as mean as a mean woman. You know I got to thinking about all the things that have happened to me on account of women in there when I couldn’t sleep. Boy they can sure ruin you… Remember the broad I married, Harp? Back in Detroit? There was a real dilly for you. When I first married her, I thought she was a real sweepstakes prize. Well, a little on the skinny side, but that’s always how it’s been with me. No meat on ‘em. Just skin and bones. I wonder why I go for skinny broads? Parmalee. That was her name… Left me for an undertaker. No kiddin’, a lousy, two-bit undertaker. To tell you the truth I was half glad to see her go. She had too many bad habits. Got on my nerves. She used to go around the apartment all day in one of them, uh, you know, Chinese housecoats. Practically lived in it. Screwy habits like that. And all winter long she’d have a cold. Boy, she was the world champion when it come to a cold. And every two weeks, I’d catch if from her. (sniffs inhaler) I’ll bet I caught better than 50 colds from that broad. (sniffs inhaler) That’s what started me on this.”

Yes, even Lee Marvin’s Dill got dumped for some regular run-of-the-mill undertaker. After this amusing monologue (beautifully delivered by Marvin), Chapman and Dill hear a noise outside. They check it out. Just a man walking his dog.  Regular American life. 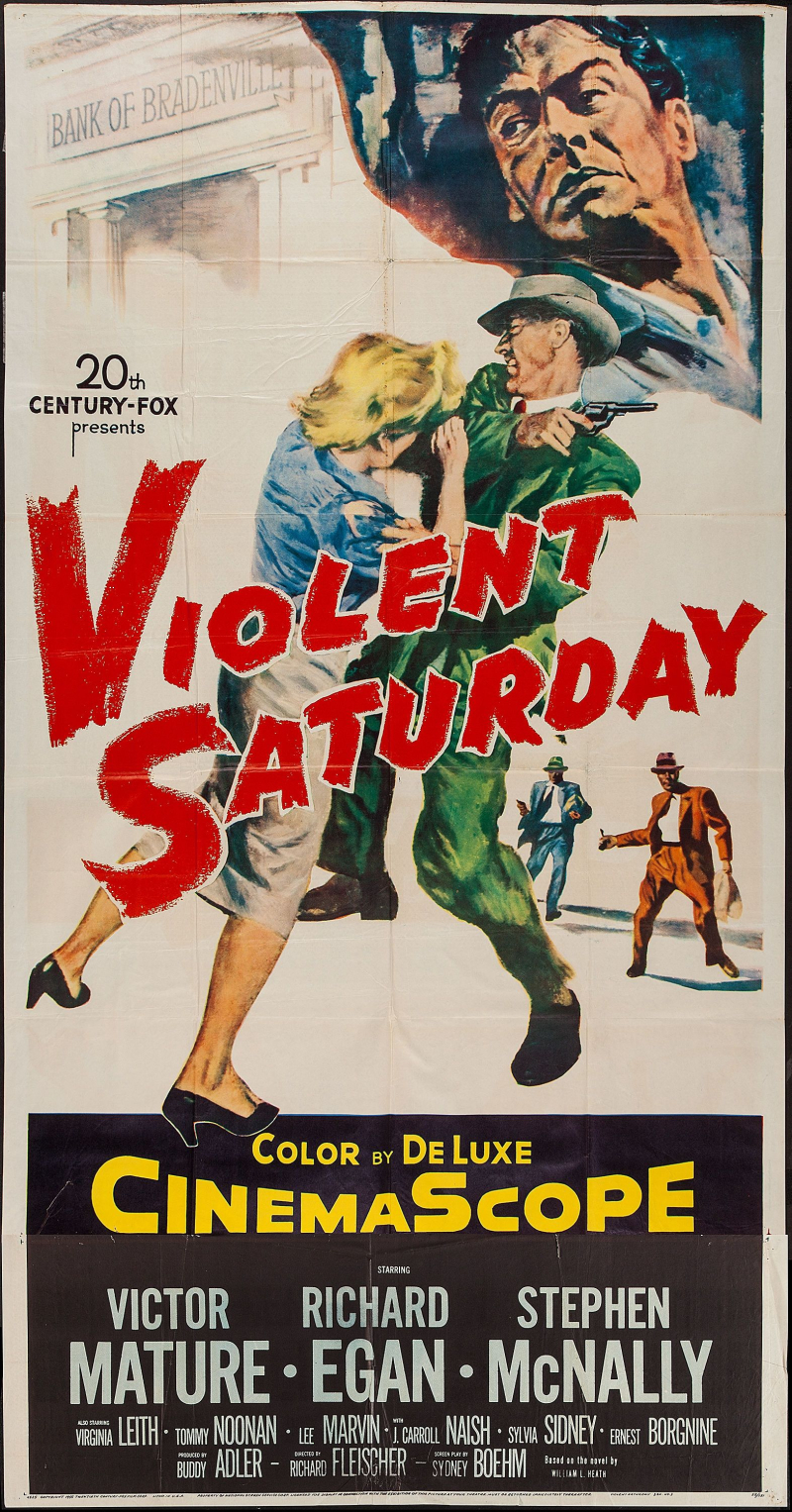 Not really. Or, yes, really. That dog-walker is the peeper – mild-mannered bank clerk Harry (Tommy Noonan). He’s married, but that doesn’t stop a Peeping Tom, and he’s about to scope pretty nurse Linda (Virginia Leith), hoping to catch her as she undresses with the blinds open. But he bumps into another townsperson who is also up to something no good – Elsie (Sylvia Sidney), the thieving librarian, stuffing a stolen purse in a trash can. Well, Elsie knows what Harry’s up to, and Harry knows what Elsie is up to, and they share a tense conversation. “I just dare you to go to the police,” she says (understandably disgusted by this guy – though she’s mostly concerned about herself). It’s a fascinating, sad scene – extra layered by the dysfunction that came before it. Prior to this, Linda, who is soft on Boyd Fairchild (a terrific Richard Egan), threatened a man’s wife. Well-off Boyd is married to Emily (Margaret Hayes), who is cheating on him with some lady-killer named Gil (Brad Dexter). Boyd gets soused at a bar, and Linda sees Boyd home – she gets him nicely tucked in on his couch. Nothing happens (though the two like each other a lot) and Boyd’s wife comes in – late. “All I want is an excuse to pull the hair right out of your stupid head,” Linda says to Emily.

But the movie, wisely, is not there to hate Emily or to take easy sides. In a moving scene, husband and wife discuss their problems and their hearts – they really do love each other. Emily, upset with herself says: “I’ve read about people like me. They’re sick people. They shouldn’t associate with decent people.” (Who is “decent,” the film seems to be asking and what does decent mean anyway – a good question) Boyd calms her and they plan to make it work. Things will be better by morning.

Well, no, they won’t. Tomorrow is Saturday.

With the town’s own emotional drama building up to such a fever pitch – it seems like the movie is just waiting for an explosion of some kind, and this gives the crime story of the movie a kind of extra punch in the gut to human feeling – feelings that are already bruised, bashed around, violent inside – a mirror. It’s a fascinating hybrid (screenplay by Sydney Boehm from a novel by William L. Heath) as directed by Fleischer (who crafted some great gritty crime pictures – Armored Car Robbery and The Narrow Margin among them) who handles the sunlit melodrama and violence with a palpable tension, and an incredible fluidity (the camera movement is beautiful) – emotions and actions in wonderful unison.

There’s so much simultaneous repression and out in the open sadness here – even within the most “normal” family – Victor Mature’s Shelley Martin whose kid, Stevie (Billy Chapin – from The Night of the Hunter) is fighting with another kid over his dad not serving in the war. Stevie thinks his dad is a coward. The kid is going to have to think again after Saturday, as Shelley, of course, is the guy nabbed by the bank robbers and dragged out to an Amish farm where peaceful Amish patriarch Stadt (Ernest Borgnine) lives with his family. Shelley and the Amish family are tied up and left in the barn (the vision of everyone tied up is surreal and hyper-real at the same time – particularly in vivid color and Cinemascope – a disturbing moment), while the men rob the bank, and shoot both Harry and Emily in the process. The peeper lives. Emily, who is readying for her marriage-saving vacation with Boyd – dies. Near the end, broken-hearted Boyd says to Linda, “She looked awful, didn’t she? Like she’d never been alive.” My god. What a thing to say.

Saturday gets even more violent. One of Stadt’s kids is shot as Shelley tries to save himself and the family. (The robbery that leads to the showdown at the barn is superb – tense, honestly adult and scary – Fleisher doesn’t even spare violence against children here, as we also saw with the hand-stepping). Shelley, as played by Mature, is supposedly the marquee hero of the story – and his bravery will, by the end, cause his kid to finally respect him (which is a little fucked up). But it is Borgnine’s sweet Stadt who performs the lethal, live-saving blow (I will not reveal, it is too great a moment), going against his values, his religion – making the ending more complex than one might expect. With this – violence had to be done, we suppose, but it doesn’t make that man feel better (even if his kid has been shot – the kid presumably will live – but Stadt still witnessed the horror and he fears for his child). But it makes Stevie feel better. “Boy, you got all of them, didn’t you dad?” Stevie exclaims to his dad recovering in the hospital. Shelley reminds Stevie, “Being scared is only normal and human. No one was every 100 percent a hero.” Stevie doesn’t really listen. He’s just happy his dad is now no longer a coward in his eyes. Meanwhile, poor Stadt and his family will live with how they feel. And an injured child.

As this film shows, being a lot of things is, as Shelley said, normal and human. The picture is both wonderfully melodramatic in the very best way and powerfully down and dirty violent – bizarre, darkly funny at times, and then bitingly real as only our sometimes bizarre, darkly funny lives can be. The robbery feels real, but it also works in a metaphorical manner. A nightmare. But a nightmare some people don’t wake up from. And one that lingers on Boyd’s mind with almost nihilistic reflection. The grief-stricken Boyd spits, “It’s so stupid and pointless to be alive in the morning and dead in the afternoon.” Pray for a peaceful Sunday. Or never pray again.