“This is the true story of a man and a gun and a car. The gun belonged to the man. The car might have been yours or that young couple across the aisle. What you will see in the next seventy minutes could have happened to you. For the facts are actual.”

Sometime in 1951 or 1952, actress,  director and movie star Ida Lupino walked into San Quentin and met a multiple murderer. The murderer was spree killer Billy Cook, a young man who killed six people in the span of 22 days by road and by car, posing as a hitchhiker, holding hostage and/or doing away with a nice mechanic (whom Cook spared), an entire family, and a deputy sheriff. He killed a dog too. That family who kindly picked up the stranger from the side of the road was traveling with their pet, and Cook felt that hound had to go. To be generous (and I'm not sure why I'm thinking so) this was either an act of mercy, or  Cook was even meaner and angrier and more psychotic than he had already proven to be. Not hard to lean towards that.

From what I read -- Cook unloaded their bodies into a mine and went on his homicidal way. He then held two men on a hunting trip hostage and demanded they drive him across the Mexican border to Santa Rosalia. Finally, he was caught. The Santa Rosalia police chief actually walked up to Cook and grabbed his gun, which almost sounds like something from a movie, but reportedly this really happened. Many things read like movies and this often feels wrong and cheap. Real-life should be understood as real life but some things are so horrifying, that we resort to movies – or movie images in our minds. Or nightmares. 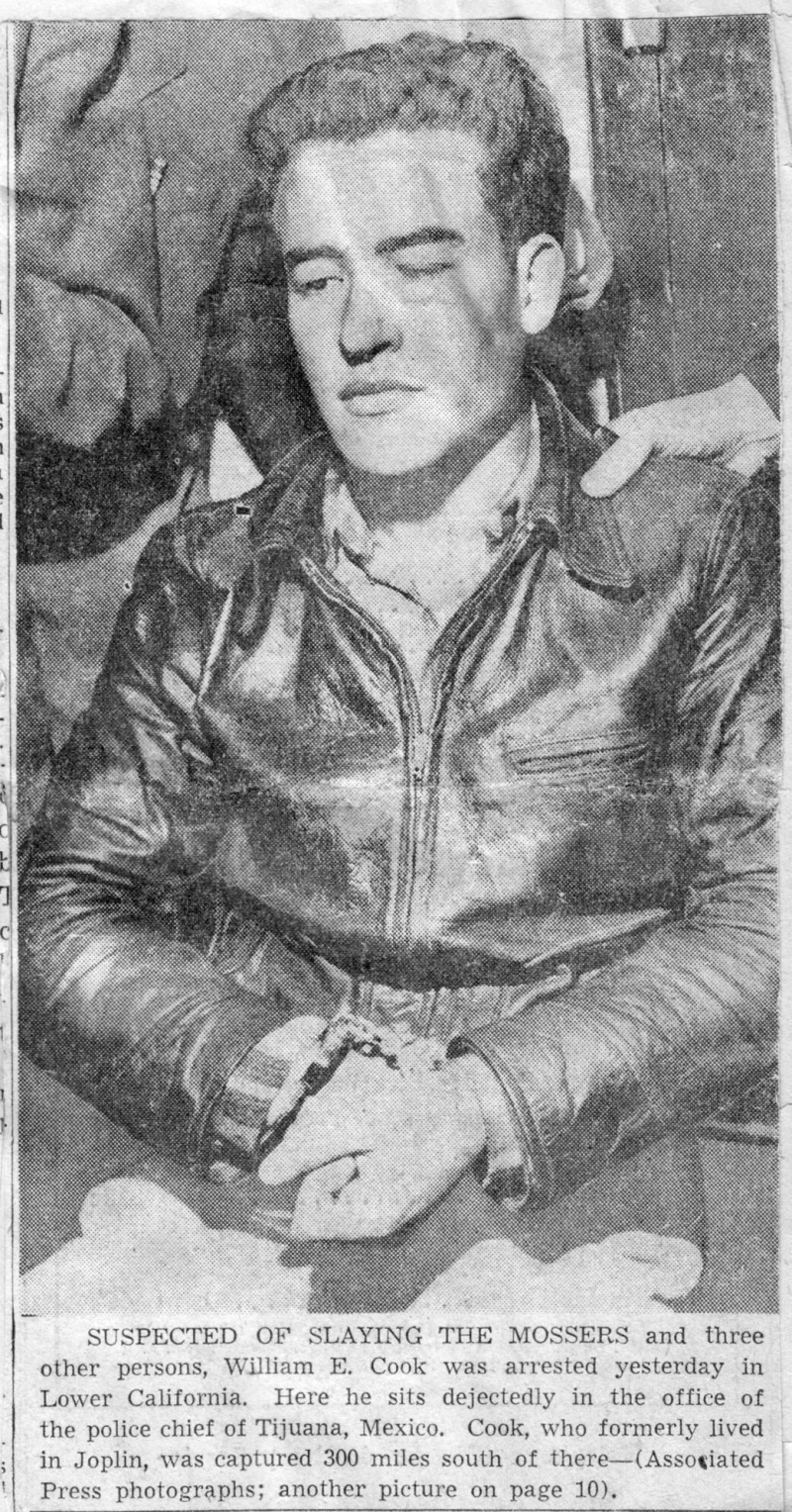 But the other dramatic element was (to use a movie term) Cook’s tragic backstory. As a young kid he was dumped off to die in an abandoned mine cave with his little siblings in tow (surely, this awful memory must have come to him when he disposed of that sad, helpful family and their dog). As a kid, he was discovered by authorities, the children were made wards of the state and set up for adoption. Brothers and sisters all found families. Cook, who had a deformed eye and a strange disposition, did not. The institutional hell Cook endured must have been ghastly and Cook became a young criminal. This is often how these things go. Then he became something beyond a young criminal...

Commemorating his lot in life, Billy had the words “HARD LUCK” tattooed on his fingers. There’s something extra chilling about the obviousness of that ink, marking him permanently with his past and his inevitable future, as if he knew that, whatever he did in life, he’d get caught and punished and didn’t care because, to use another obvious saying, he was born to lose. When you’re born to lose you have nothing to lose so, again, who cares? Let me have my revenge on a society that rejected me, even if these people don’t deserve it, and let them catch me, because I’ve got nowhere else to go, and I will fry for this but… as he said when arrested, “I hate everybody's guts, and everybody hates mine.” So, did he care that an actress, film director and movie star came to meet him? It sounds like no, no he did not. 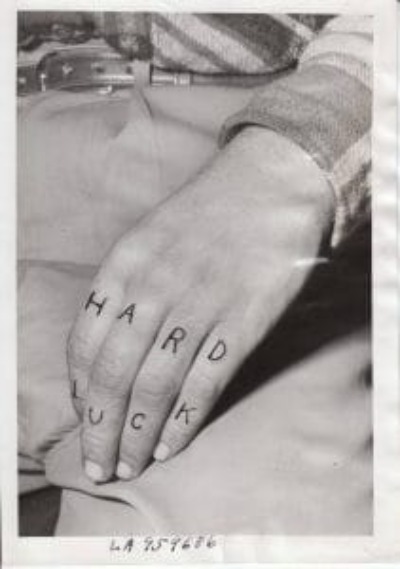 Ida Lupino wasn’t so keen on Billy either. Set on making a movie inspired by Cook’s horror (she interviewed two of his victims as well) and needing his approval, she entered the prison and who knows how she thought it would go down. People have found themselves sympathetic towards murderers (think of Perry Smith via Truman Capote) or charmed (think of Charles Starkweather), but Lupino expressed her feelings with the bluntness of Billy’s tattoo – she was scared and she wanted to get the hell out of there. As detailed in Mary Ann Anderson's “The Making of The Hitch-Hiker,” Lupino said:

“I was allowed to see Billy Cook briefly for safety issues. I found San Quentin to be cold, dark, and a very scary place inside. In fact, I was told by Collie (Collier Young) not to go; it was not safe. I needed a release from Billy Cook to do our film about him. My company, Filmakers, paid $3,000.00 to his attorney for exclusive rights to his story. I found Billy to be cold and aloof. I was afraid of him. Billy Cook had ‘Hard Luck’ tattooed on the fingers of his left hand and a deformed right eyelid that would never close completely. I could not wait to get the hell out of San Quentin.” 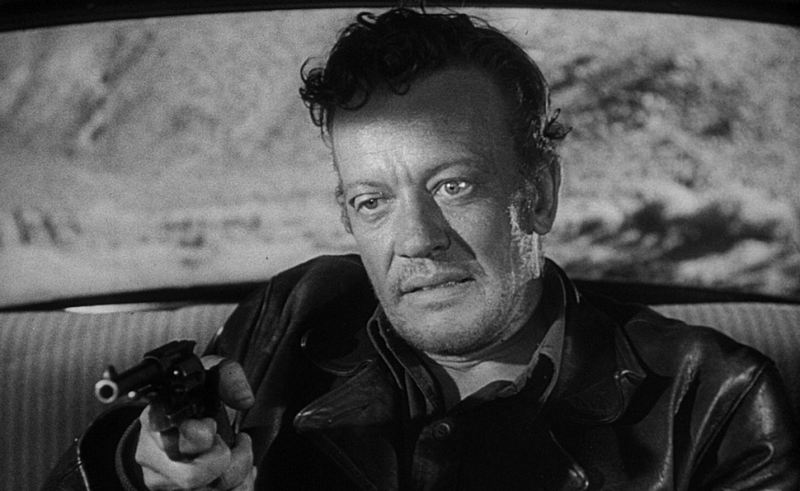 The resulting film became The Hitch-Hiker (Lupino’s fifth as a director, she was the second woman admitted in the DGA, and long considered the first woman to direct an American film noir), with a script by Robert L. Joseph, Lupino and Collier Young (from a story by Daniel Mainwaring, who was blacklisted and did not receive screen credit). The script was modified so to be less directly about Cook (both the Federal Bureau of Prisons and the Motion Picture Association forbade movies that were too close to the real crime, actual names and biography not to be included) but many details show up in the movie. The hunters become two guys on a fishing trip (played by Edmond O’Brien and Frank Lovejoy) and Cook, who becomes the taller, older and more mysterious Emmett Myers (played by William Talman), has that deformed eye. One eye does not shut close – a terrifying abnormality that increases the men’s unease as Myers is always watching them, seemingly, even in sleep.

The great Lupino, both unflinching and sensitive in her direction, does not give Billy’s stand-in, Emmett, the “Hard Luck” story of the kid’s inspiration. Unlike some cinematic depictions of psychos, she offers no perverse attraction or twisted Tommy Udo-like charisma to Talman’s lunatic – he’s just terrifying in facial features, affect, stature and impenetrable sociopathy. There’s nothing charming about this guy, there are no moments of warmth or even a lazy break on his part towards his captors. He’s pure sadist – almost at times, a lonely, bored sadist, burned out on life – as if he likes tormenting these men because he also needs their company. 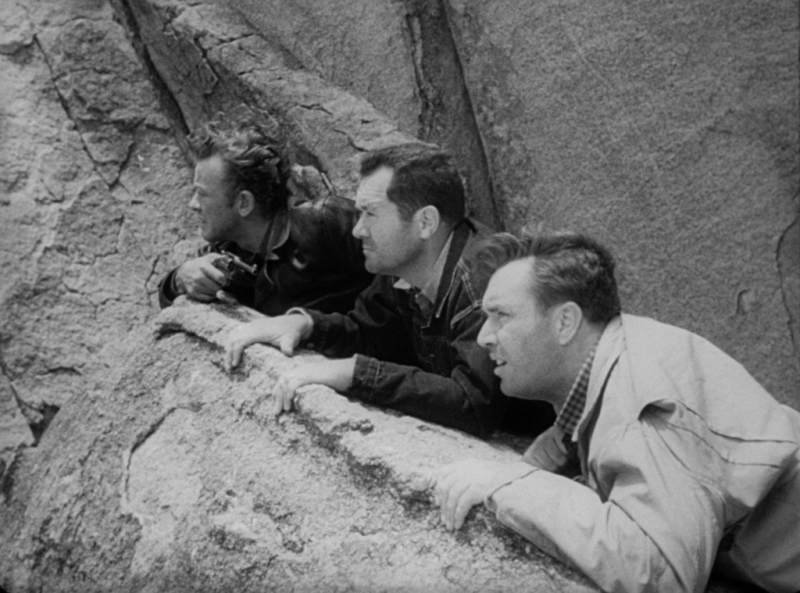 O’Brien and Lovejoy’s hostages remain deathly afraid of this man, angry at him and, in moments, frustrated with each other while stuck in this claustrophobic nightmare. As they’re driving through the Baja desert towards Santa Rosalia, taking awful “breaks” with the lunatic, the two men express moments of fear and sadness in affecting bursts of raw emotion – Lovejoy’s embrace of a young girl at a rest-stop (“Vaya usted con dios,” he says to her, which Talman makes him translate: “Go, you are with God little one.”) or O’Brien yelling, indeed, howling, to a plane for help, which results in nothing. It’s brutal and beautiful as (with the help of cinematographer Nicholas Musuraca) Lupino focuses on faces and location – close-ups of these differently featured men juxtaposed with the vastness of the desert – the bright sunlight feeling as oppressive, maybe more oppressive, than the blackest shots of night. She also never translates the Spanish spoken in the movie, a bold and modern move, creating even more unknowability and tension for the viewer. What is going to happen? You may know the real-life case, but there are moments you’re not sure both men will make it out alive. 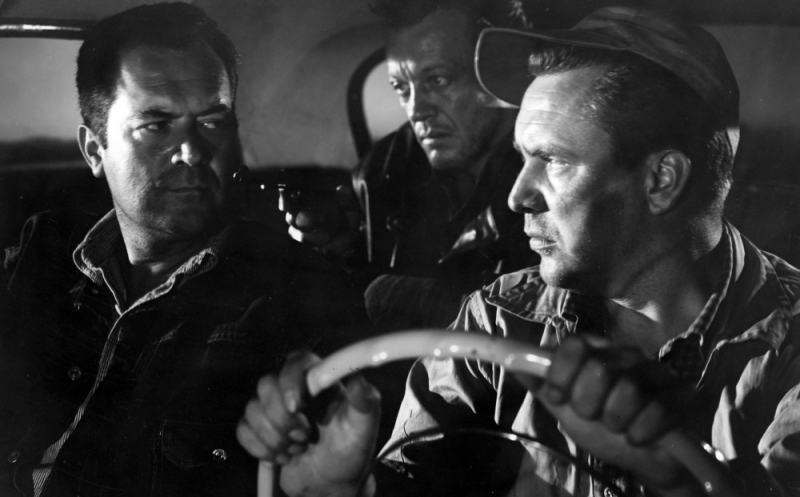 The Hitch-Hiker is an upsetting movie. Yes, it’s suspenseful and, as some might say, it’s the oft-used “taut,” but it’s a rough experience that offers no sympathetic backstory for the killer, nor easy resolutions for the victim’s future. You assume that they go home after their ordeal, while the killer (who murdered three early in the film before picking up his captors, as opposed to the real-life six of Billy Cook – production code issues) goes to the electric chair.

But whatever trauma that haunts those two men lingers in our minds after the picture ends, to Lupino and the actor’s immense credit. We don’t know how to feel. Relief? Not exactly. These men will never be the same. They will carry this incident with them. It's as if the victims are, in some ways, marked with Billy Cook’s own ink –  HARD LUCK.