Wild Boys of the Road 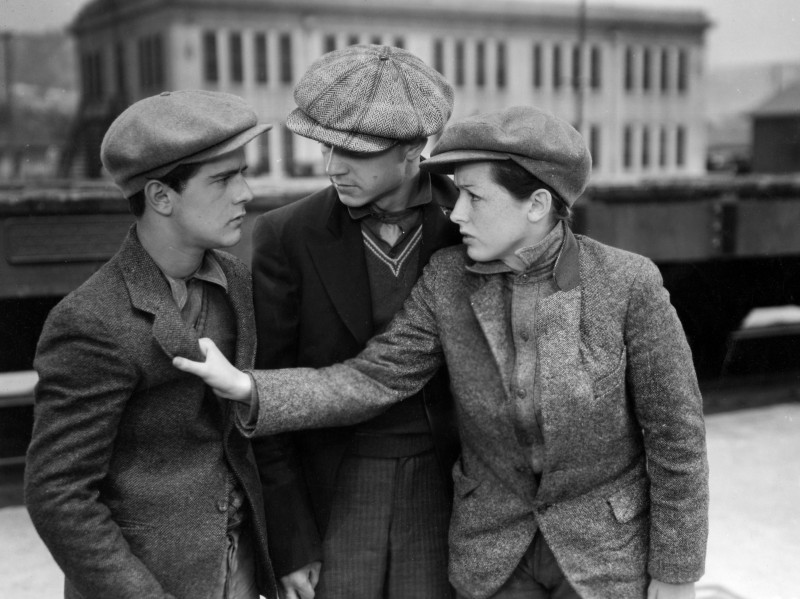 Eddie: [to judge] I knew all that stuff about you helping us was baloney. I'll tell you why we can't go home—because our folks are poor. They can't get jobs and there isn't enough to eat. What good will it do you to send us home to starve? You say you've got to send us to jail to keep us off the streets. Well, that's a lie. You're sending us to jail because you don't want to see us. You want to forget us. But you can't do it because I'm not the only one. There's thousands just like me, and there's more hitting the road every day.

These are kids. In William Wellman’s depression-era Wild Boys of the Road – these young people jumping trains, fighting off railway men, scraping and scrapping to survive – are, really, just kids. Not wizened hoboes or street-smart tough guys – kids. In gorgeously-gritty, location-shot scenes with an unflinching documentary feel, they hop trains, quick and nimble, for they are full of life and vigor, but their vulnerability against those hulking steam engines is ever noticeable – they always appear like they could be squashed like bugs – by the merciless machines and, certainly, by society. And, indeed, one of the kids is run over – his leg will be amputated. 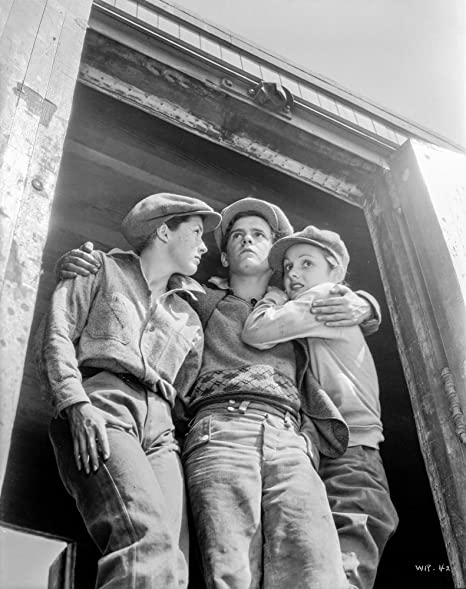 Even as positive and as tough as some of them try to remain, you feel an air of doom for these likable young people, you see their innocence and belief in something brighter on the precipice of fading away. (One of the girls, in a terrifying scene, is raped by a railroad brakeman played by Ward Bond). You see that, in a few years, maybe even a few months, they’re going to become hardened, burned out or turning to full-time lives of crime, mostly out of necessity. And who could blame them? They could become another Tom Powers a la Wellman’s The Public Enemy (in which Wild Boys Frankie Darro played Powers’ childhood buddy) or just a regular down-an-outer petty thief – nothing Cagney-charisma about it – one of those types who may even eventually thieve from the more gullible, from those younger than them – stealing from who they once were. Oh, no. You sure hope they don’t become like that. You sure hope they don’t become mean and cold-hearted.

Wellman’s protagonists – here, chiefly, Darro as Eddie Smith, Edwin Phillips as Tommy Gordon and Dorothy Coonan (later Dorothy Coonan Wellman) as Sally (who dresses like a boy) – are sweet and complex and full of love for each other, and their friendship is heartbreakingly touching. So, when bad things happen to these kids, like Tommy losing his leg – you despair for them. Tommy says, before his leg is amputated, all tough and sad to Eddie: “Shucks, what do I care about an old leg? Just think, from now on, when I get a pair of new shoes, I'll only have to break in one of them.” That’s both trying to harden yourself when you’re terrified and trying to remain optimistic at the same time. It’s an understandable way to live given these kids’ circumstances, but they should be what they are at that moment – kids.

And then there’s the fact that Eddie and Tommy set out on the road because their parents couldn’t find work – the two young teens are first presented as kids going to dances and leading pretty regular lives, albeit with poverty creeping in – until their parents are crushed by the depression. They care about their parents and try what they can to help before embarking on the road (Eddie sells his beloved jalopy to help his dad and pretends he doesn’t care about it – he does care) and as they go through fear and some fun on the road, but mostly a lot of hell, they bond and care even more about each other, and you really, truly care about them. As Wellman clearly did too. This was, according to Wellman’s son, among his favorite films. In William Wellman, Jr.’s biography of his father, “Wild Bill Wellman: Hollywood Rebel,” he that the movie reminded his father “of his own troubled youth.” And he worked hard on the picture  – reportedly went over budget to maintain his on-location, documentary-style vision. It’s a beautifully shot picture (by cinematographer Arthur L. Todd) and, in moments, bracingly real, scary, particularly as it’s addressing direct social issues of the day. Tough, grittily realistic and uncompromising (until the end –the ending was changed and softened and feels tacked on) Wild Boys of the Road still astonishes the viewer all these decades later. It’s also exciting, incredibly tender and moving, thanks largely to Darro’s soulful performance and Wellman’s two-fisted sensitivity. Wild Boys was released the same year as Wellman’s other masterful, harrowing pre-coder, Heroes for Sale (1933 was one of those incredibly prolific pre-code years for Wellman, he released six pictures – he also shot seventeen uncredited scenes of the picture, Female) and it takes on the concerns he cared about (also visited in his 1928 picture, Beggars of Life). And taking on the concerns of kids. Again, these are kids, and Frankie Darro (who grew up in the circus with his parents – and who stood five feet three inches tall – he was around 15 here), looks, at times, even younger than he was. In stature. His face, however, is all tough and sensitive – a poignant presence, he’s already got a lot of wisdom in his eyes. But, again, he’s a kid growing up too fast.

And, so, it seems the idea that kids were the protagonists of this depression-era picture was upsetting (which is why this picture is so damn powerful) and, to some keeping tabs on the filmmaking, too upsetting. Wellman was asked to shoot an alternate happy ending. As said, it feels strange and forced, so much so, that the happiness the kids feel at the end, doesn’t seem like it’s going to last. That this was just one of those freak breaks that never happens in life and maybe it won’t even happen – for real. As detailed in William Wellman, Jr.’s biography about his father, this was not what Wellman wanted. The intended ending (after the kids are busted – for something they’re not even guilty of – Eddie was duped into a bad situation) went like this:

“The judge reads the sentencing to the youngsters: ‘Sally Clark. House of Corrections. One year, ten months. Thomas Gordon. County Farm. Eligible for probation in one year. Edward, the law compels me to send you to the State Reformatory. You will be confined there until you reach your twenty-first birthday. I’m sorry to do this—but the law leaves me no other alternative.” The three kids are ushered by an attendant from the courtroom to a waiting police vehicle. As they drive away, the teenagers stare out the window at a world they won’t be seeing for a long time. From an upper window of the court building, the judge watches their departure on the road to incarceration.” 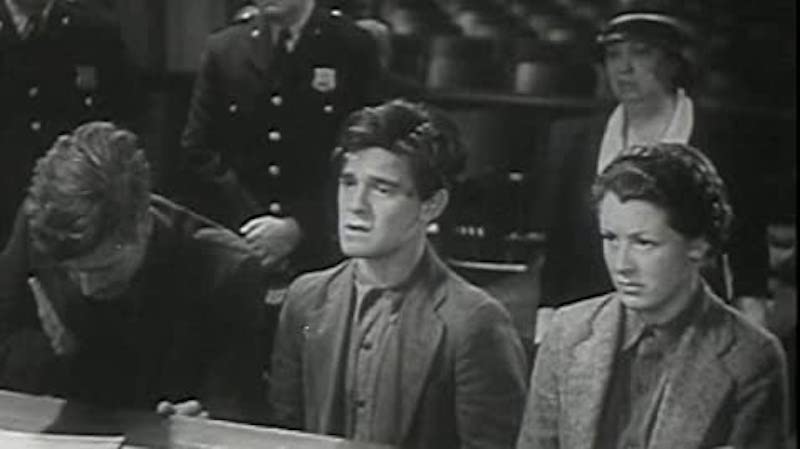 The ending Jack Warner insisted (as I read in Wellman, Jr.’s book) and what we see in the film now, is all three kids getting a break by a kindly judge (I’ve seen him compared to Roosevelt) who takes pity on them. See, the system isn’t so bad… Well, it’s such a weird ending that it makes Eddie’s little moment of joy upon leaving the courthouse all the more powerful because, once again, we realize that this picture is about the deep bonds of friendship (much like Wellman’s Wings and the superb Other Men’s Women – among many other pictures). Darro – a terrific acrobat (there’s another scene in which he skillfully, and thrillingly jumps into a garbage can to hide) does a series of flips, including backflips and spins on his head. He’s expressing how happy he is that he got a break. And it’s beautifully moving. But then he notices Tommy eyeing him with envy, and Eddie’s eyes fill with empathy – Tommy, with one leg, will never be able to leap and jump and flip like a young man again, his future is even more uncertain than Eddies – and you see how much Eddie, who showed the same eyes for his poor father, feels for his best friend.

No matter what that judge said that’s supposed to make us feel some hope, the world is still an uncertain place for these kids. But their hope in each other – even if the world might and probably will crush them – is enough to make one weep.

As Tommy exclaims, “What about us? We're kids!”