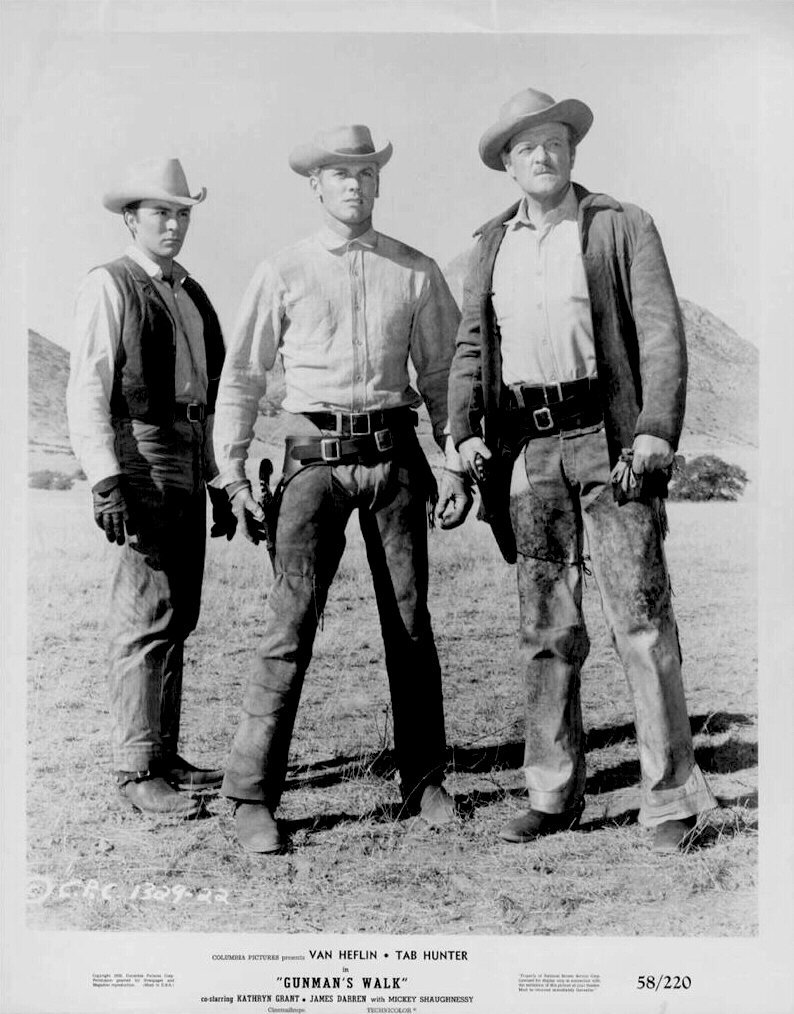 “Look, times don’t change in this country where you breed a man soft… without any spirit in him. A man’s like a horse. If you don’t buck the first time you put a saddle on him, he ain’t worth having, you know that!”— Lee Hackett (Van Heflin)

In Phil Karlson’s Gunman ‘s Walk – you wonder how hard old rancher Lee Hackett (Van Heflin) handled his sons. Sure, he probably belted them – he even makes causal reference of it to one of the boys when they return home after a journey on their horses. But anything to do with beatings are mostly said with a laugh. That’s just how things were done back then and the boys are tough and grown up now and why would they question any such thing? Why would they question anything their father espouses? Their father knows all. All.

Physical punishment for kids is awful -- but that's not what is entirely wrong in this family dynamic -- or so far we know. What else? What else did Lee instill or pummel into these boys that made them come out the way they did? (There’s no mother around – we assume Lee is a widower). And why did they come out so differently?

One, the younger son, Davy (James Darren), is a sensitive sort – in later years (this liberal-minded western came out in 1958 – written by written by Ric Hardman, screenplay by Frank S. Nugent) Davy might be considered a proto-hippie – a peacenik. He doesn’t care much for competition, he’s calm and thoughtful, and he’s not woefully insulted if he’s not the best shot with a gun. He, in fact, doesn’t even like wearing his gun – he sees no use for it save for shooting a horse that’s sick or maybe ridding a threatening rattle snake. So why does he have to wear his holster and gun around town? People think it’s outmoded and, frankly, silly. They stare, he says. His disappointed dad, Lee (both sons call their father “Lee” and not dad), says let ‘em stare. That’s how the Hackett’s built this town, that’s how they kept reign, that’s how it was and how it should stay. Intimidating. To Lee, guns are good, goddammit. You gotta stride around with that gun – it gives you that extra … potency.

Lee – this is a man who is fearful of getting older, fearful of limpness. Guns are frequently discussed as such (and perhaps too easily at times), but in Gunman’s Walk, yes indeed, the gun really does seem to represent the phallus. In Lee’s eyes – you’re not going to walk the same without one.

With that, Davy weakly shoots some bottles his dad sets up to see how rusty his son has gotten, and we wonder if the son is missing on purpose – if he’s just so sick of this gun business. Is Lee embarrassed of him (is his son gay?). I don’t think Lee suspects this of Davy, but there’s an insinuation that he’s not a real man, which the movie makes sure we never think. Davy, in fact, is more his own person. And he’s a loving young man – he’s not going to poison his dad with too much resentment – nor his older brother. But after we meet that older brother, we wonder how he came out so sweet.

That older brother, Ed (a fantastic Tab Hunter) is the ace shot. He likes wearing his gun. He practices his moves in the mirror – something Davy makes gentle fun of him over. Ed seems to enjoy scaring people, and really, he wants to scare his dad. He wants to beat his dad – beat him in every game that father has thrown at him. He’s tall and blonde and handsome and he makes passes at girls (too roughly) and he never seems happy. Never. Even when he’s singing in a saloon, drunk: “So many nights for havin' fun/ So many fights I haven't won/ There's not enough notches on my gun/ I'm a runaway/I'm a runaway…” he seems out of control, not joyful. Vaguely sociopathic. But there’s something sad inside this “bad seed” – something his dad planted. He could snap at any minute. He does. Quite a few times. He's mad at the world but he’s mostly mad at his father.

When Ed rides up to the ranch with his brother, he lets another man brush down his horse. Lee is angry and says:

“Listen son, you let a man do things for you, things you should be doing yourself, and sooner or later he’s gonna get the idea that he’s a better man than you are. Now you remember that.”

A better man. No one should be or even think so. Well, except Lee. Lee is better than everyone, including his sons. Ed, as we see from the get go, is deeply resentful of this. Even hateful. When his dad is setting up a can to shoot – Ed shoots it right out of Lee’s hand, and when Lee’s back is turned. He could have killed his father. Lee is furious. And then … he lets it go. He just lets it go. He laughs a big, somewhat charming, somewhat overcompensating laugh that we’ll see a lot in this movie. Ah, boys will be boys.

In a later, beautifully directed scene, we see Lee at a saloon with his buddies, whooping it up, laughing his amiable/slightly sinister Van Heflin laugh, and Ed sits grim faced, staring at his father’s reflection in the saloon mirror. He then shoots that reflection. It’s a dramatic gesture and should be a warning to Lee – but Lee takes it in stride. Or does he? That reflection is what Ed will later call the “shadow” – he is a shadow compared to his father – and in a way, he is shooting himself too (after all, Lee likes to look in mirrors – there’s another doleful moment in a mirror in the picture). Ed hates Lee but he must love him too. Lee loves Ed – he “loves” him so much that he hires someone to lie when Lee “accidentally” shoves a half-Native American cowboy (Bert Convy) off a cliff on a cattle drive. Ed is after a beautiful white mare and that cowboy got in the way – something (the beautiful white mare stands stark and haunting in this movie— behold a pale horse – Ed is chasing death).

Things just build and build after this. Davy falls in love with Cecily "Clee" Chouard (Kathryn Grant), a half-French, half-Sioux whom both his racist brother and father refer contemptuously to as a “half-breed.” She’s the sister of the dead cowboy and Davy starts siding with the family more than his own… This is unacceptable to Lee. Not a surprise.

And Ed is just going crazier –the more he runs rampant in town, acts his own unhinged way, the angrier at his father he becomes. And himself. This is a young man who hates himself. That he’s a shadow. In the end the shadow must be killed – by the father – it’s a shocking and disarmingly moving ending and makes Gunman’s Walk something of a masterpiece.

Karlson, who directed some of the great, tough-as-nails noirs (99 River Street, Kansas City Confidential and The Phenix City Story) wonders why in hell do these people have to be so violent. Does it solve anything? This is a director questioning authority; looking at how we blindly believe in institutions – one of them being “manhood,” domination. And he gives Heflin, Darren and Hunter plenty to explore here – these are fascinating character studies, both deeply human and symbolic. 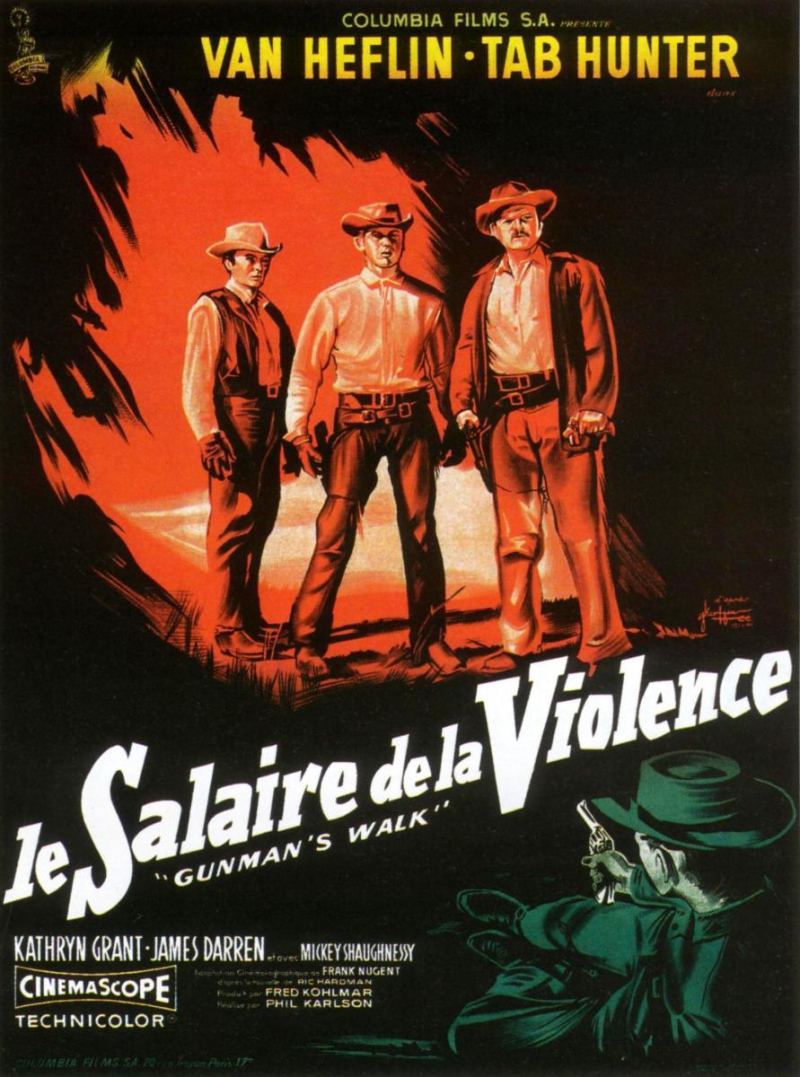 Heflin’s Lee – god knows what he did to his sons and god knows why he is so obsessed with Ed. What is going on there? There’s an inverse to Martin Ritt's Hud here – Heflin’s character puts up with so much with Ed, irritated by his gentler son, while Melvyn Douglas’ righteousness clashes with his bad boy son (whom Douglas does not love – which messes up his son – he’s got to account for that). You get the feeling that Heflin’s Lee would get along well with Hud the cynicism and corruption of Paul Newnan’s Hud. But would Hud hate him too? Probably.

But to Heflin and Hunter’s immense credit and their brilliant performances (this is one of Hunter’s greatest roles) – we, the audience, don’t hate them. We can’t. We get that they are damaged men – and that there is something about the world, something about what is expected of masculinity, that can twist these two men and turn them crazy. The resulting movie is heartbreaking – Lee is rendered powerless – and that makes him, to the viewer, in some ways, more powerful. More open. More of a human being. And some powerful men were affected by this. 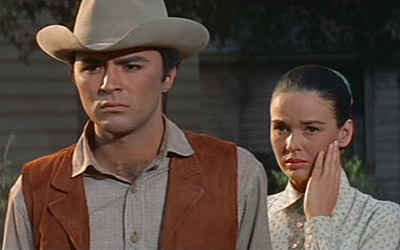 One of those powerful men was the fearsome (and hated by many) Columbia studio head, Harry Cohn. According to Karlson (in an interview with Todd McCarthy and Richard Thompson), Cohn was moved beyond his own comfortable measure. Said Karlson:

“There was no tougher man in the whole world, and I had the pleasure of seeing this man sit in a projection room, with Freddie Kohlmar and myself, crying at Gunman's Walk. At the end of that picture, he was literally crying. Harry Cohn crying! Freddie Kohlmar got up; he was so embarrassed he walked out… Then I started to get out and he stopped me, Harry Cohn, and he said, ‘Wait a minute.’ He now bawled out the projectionist for turning the lights on, because nobody turns any lights on unless he gives the order, presses the button. He was so moved by that picture because he had two sons and this was a story about a father and two sons. He identified completely with that motion picture and he said to me, ‘You're going to be the biggest director in this business and I'm going to make sure you are.’”

“Wouldn't you know, that's the last picture he was ever associated with.

“He went to Phoenix, Arizona, and died.”