New Blood: The Color of Money 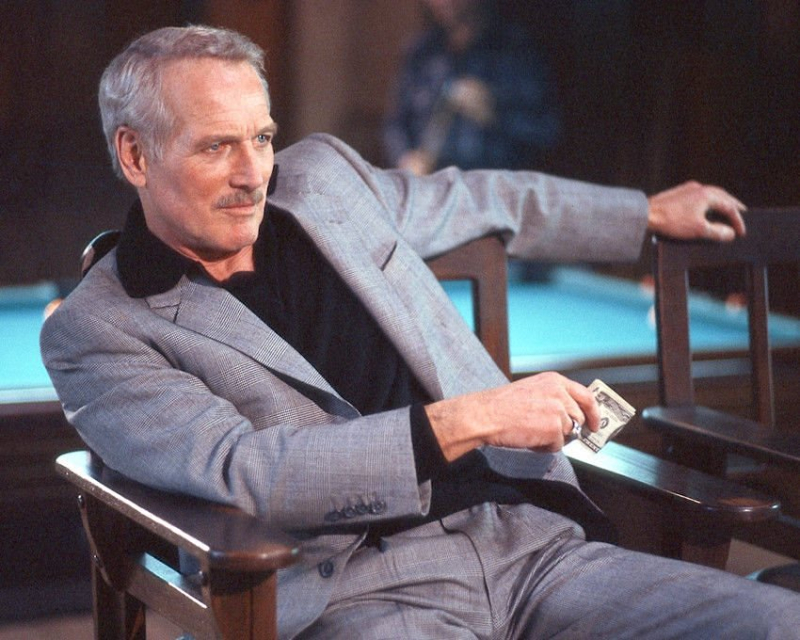 “Life is on the wire; the rest is just waiting.” – Karl Walenda

“On the snap Vincent!”

This is uttered to pool player and obnoxious kid, Vincent Lauria, via his manager girlfriend, Carmen -- almost like a boxing trainer -- in a smoky bar on a regular night of nothing particularly special in the 1980s. Phil Collins' “One More Night” plays on the soundtrack (and presumably jukebox) because that’s what would be playing in a place like this. And there goes Vincent breaking those balls. He breaks them like a “sledgehammer” as the older man observing him from the bar says with a mixture of surprise and discovery. He says this even before really seeing the kid. The older guy is talking to his lady friend bar owner, discussing the liquor he now sells, getting kind of cozy and romantic with her about who made her an omelet and who is going home with her when she gets off (he is going home with her). He’s a strikingly handsome wizened fella, dressed old-school but cool in a beautiful grey suit, sitting in the bar paying half attention to the pool game going on behind him and then…he hears this kid. And then he sees this kid. This weird kid who showboats and hoots and does some kind of wanna-be samurai sword move with this pool cue. And then the weird kid plays a video game during his break from the game. Total ADD and immaturity. What?

But. This kid. He’s got something special and the older guy knows it right away. And, then we hear it again: “Come on! On the snap Vincent!” And then it’s all over after that for the older guy. It’s like falling in love, or finding that thing that will give you a life force, or finding your next victim. 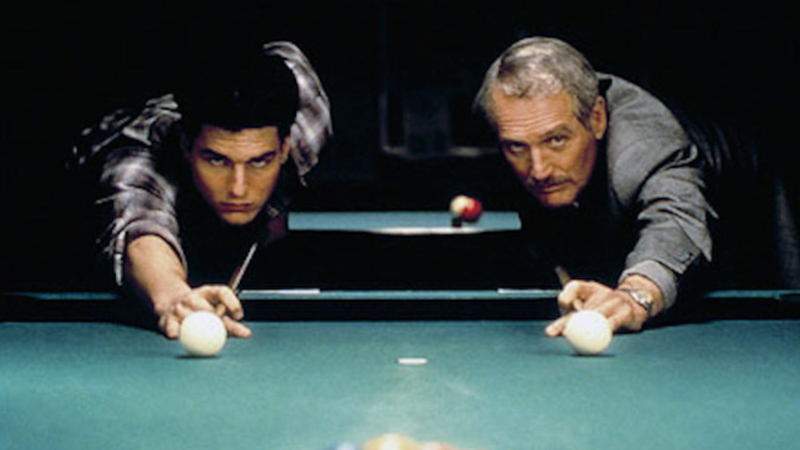 This is all happening at the very beginning of Martin Scorsese’s under-discussed The Color of Money --  the camera reacts to Vincent’s pool skills and that older man reacts and we react -- our senses are heightened, we’re perked up, curious, even on edge a little, and we feel alive. All from faces and pool balls and that cracking sound. The camera does a zoom to that older man at the bar, we see him in beautiful close-up, more than curious, a little spellbound, but without losing his cool, that man just happening to be Fast Eddie Felson (Paul Newman), he of the classic The Hustler (directed by Robert Rossen, based on the novel by Walter Tevis, as is The Color of Money, adapted by Richard Price). Former pool hustler Fast Eddie is going to find himself back in the game via this kid, Vince (Tom Cruise) and his intelligent girlfriend, Carmen (Mary Elizabeth Mastrantonio), and the movie will become less about the discovery and maturation of greenhorn Vince (though it certainly goes there) and more about the simultaneous soul-stirring feelings this kid inspires in his mentor and the vampiric victory that mentor can suck out of him. The victory being – he is simply back to doing what he loves.

This film has been unfavorably compared, by some critics, to a cheesy perfunctory training film of the 1980s -- as if Martin Scorsese, needing money and working as a director for hire, had directed The Karate Kid (nothing against The Karate Kid), but it’s so much more interior than that, so much less easily heartfelt (in a good way), so much stranger and real-life and haunting.

The nostalgia of Fast Eddie is cagier, there really is no nostalgia to it, and Newman, brilliantly, never plays his character that way. He’s neither a sleaze nor a perfect father figure nor a “let’s all be in awe of this guy” type. He’s like a lot of dads or mentors or lovers – he’s fucked up and selfish but smart and world-weary and maybe was the best at one time and you should listen to him when he’s being wise about things but you also really, really, sometimes, should be wary of this man too. What’s his game anyway? 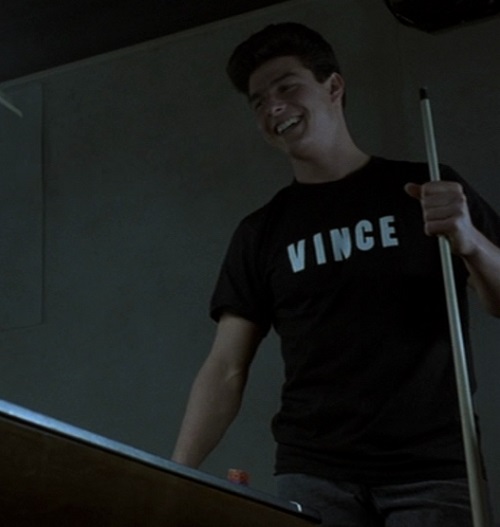 Fast Eddie asks Vince and Carmen out for dinner and over not too-long of a time, he starts to get to know both of them. Carmen is a tough customer, she drove the getaway car when her boyfriend robbed Vince’s parent’s house (a real meet cute at the police station), but she’s smart and she actually listens and takes in advice. Vince works in a big anonymous store wearing a tee-shirt that says VINCE on it (he wears it again while playing pool, a nice touch). What does this kid want to do with his life? And what does Carmen want out of it? Fast Eddie had already sized her up the first night in the bar as he says:

“Maybe I'm hustling you, maybe I'm not. You don't know, but you should know. If you know that, you know when to say no.” She says, “What should I say?” His answer: “You should say no. Why? Because it's too much money and I'm an unknown. He should be the unknown. That would be nice. That would be beautiful. You could play around with that. You could control that.”

You could control that. Fast Eddie introduces the pair to a bigger life of pool hustling, which Vince has some issues with (throwing games?!) but soon these three are on their way to a championship in Atlantic city, albeit with a major bump in the road -- a humiliated Fast Eddie is scammed by Amos (Forest Whitaker -- marvelous) and storms out on them. Mentor no more. Fast Eddie is going to start playing himself -- fuck this kid -- even if he’s grown fond of him.

The movie is so dead and so alive. Almost dead, in the right way, when these characters are out there on the streets, driving in cars, talking in cafes, and it’s supposed to be – life outside the pool hall is just there and the camera (the film was shot by ace Michael Ballhaus -- lot of movement and quick zooms and whip cams – so beautiful and thrilling) reflects it in those moments. Static. But when we go into the pool halls, the choreography works like a musical. Tom Cruise even has a musical number -- set to Warren Zevon’s “Werewolves of London" -- and it’s just so ridiculous and wonderfully embarrassing and like the werewolf’s hair: perfect. Cruise is incredibly human and very strange in the way a kid like this might be – he’s cocky and needy and when he tries hard to be cool, it comes off just… bizarre. Damaged. 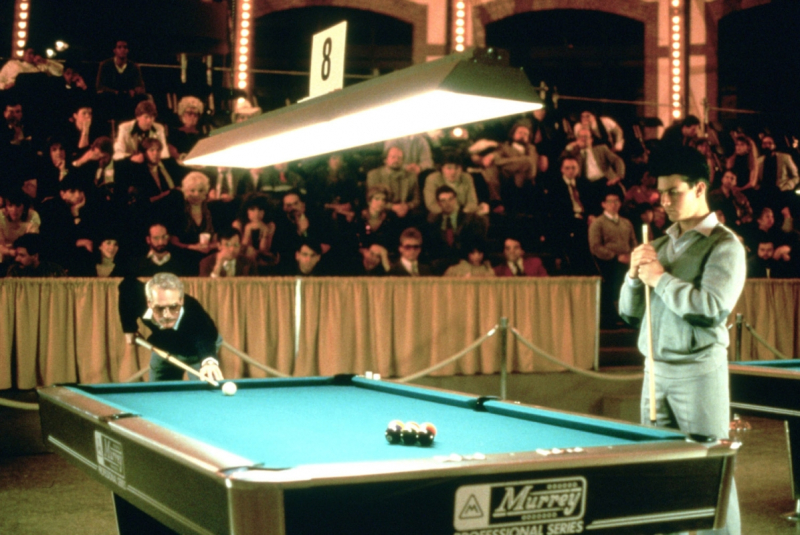 But, Newman. Newman is cool personified -- the coolest motherfucker in the room, in fact. But he’s getting older and he needs his mojo back. Seeing sticks all the time, it’s easy to think of (sorry to be less delicate about it) one in need of getting it up. Tom Cruise is like Viagra for this guy. But it also feels like two gunfighters, two samurais, the young gun and the master facing off, swords for pool cues (and again, Vince and all of his showboating sword-twirling with the stick). And, so, when the film ends and these two are about to duel -- we don’t know what will happen. And that is the best way to end this movie, I don’t care what any critic says.

When the picture freeze frames on Fast Eddie and he says, “Hey. I’m back!” this could be so corny but … it’s so not.

He is back, not because we’re simply cheering on his glory, but because he’s drunk on the blood. That blood that Vincent provided for him. Eddie was right when he sized up Vincent in the beginning and called him a “character.” Vincent initially takes this as a compliment but Eddie says, “That's not what I said, kid. I said you are a natural character; you're an incredible flake. But that's a gift. Guys spend half their lives inventing that. You walk into a pool room with that go-go-go, the guys'll be killing each other, trying to get to you. You got that... But I'll tell you something, kiddo. You couldn't find Big Time if you had a road map."

Fast Eddie needed that character and he needed that flake to get to where he is by the end of the picture. He’s been one hell of a mentor, and he’s wise and wonderful in many ways, yes, but he also needed to fuel himself. It’s life-affirming sure, but it’s also a little life-sucking and selfish. It's not an inspiring story about two guys learning from each other -- even if they do learn. It's so much more interesting and layered than all that. 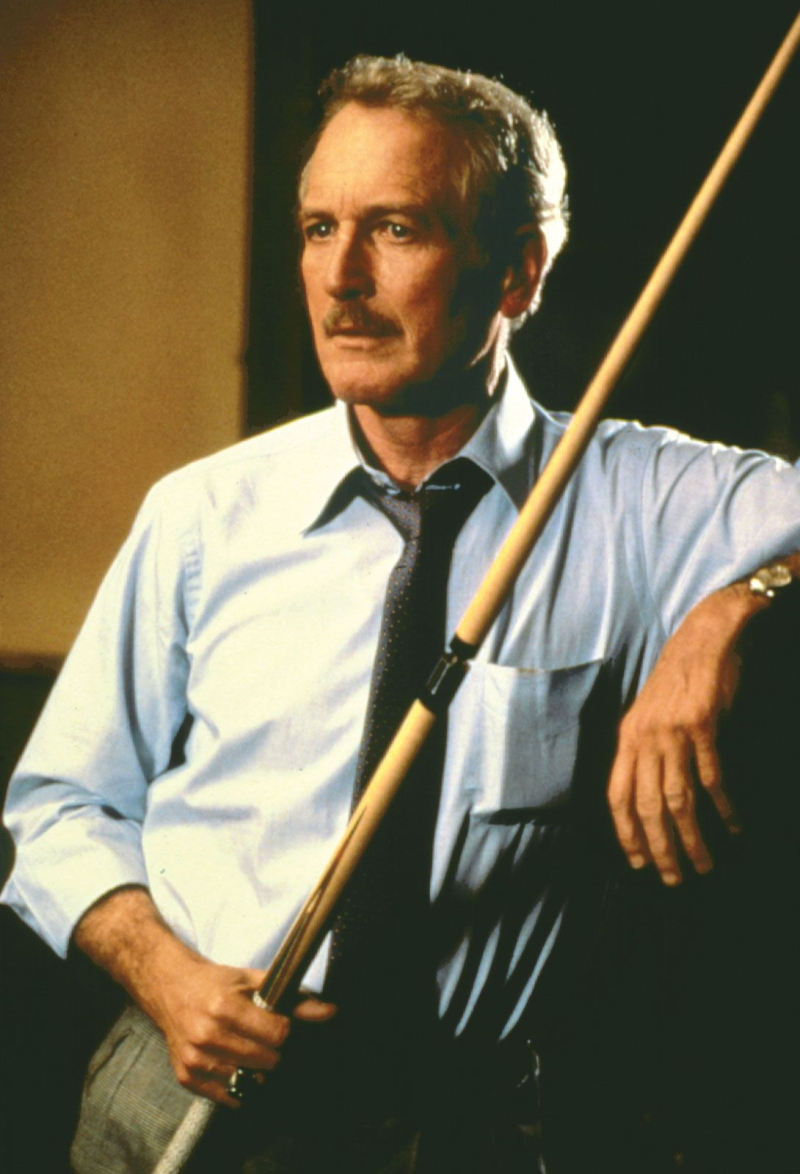 In an interview with Richard Schickel, Scorsese put it: “I wanted it to be a story of an older person who corrupts a young person, like a serpent in the garden of innocence.”

We're mesmerized by this serpent and even if we feel bad for the natural character and flake, we're rooting for the serpent.  Aren't we?