You’re on Your Own: Blood Simple 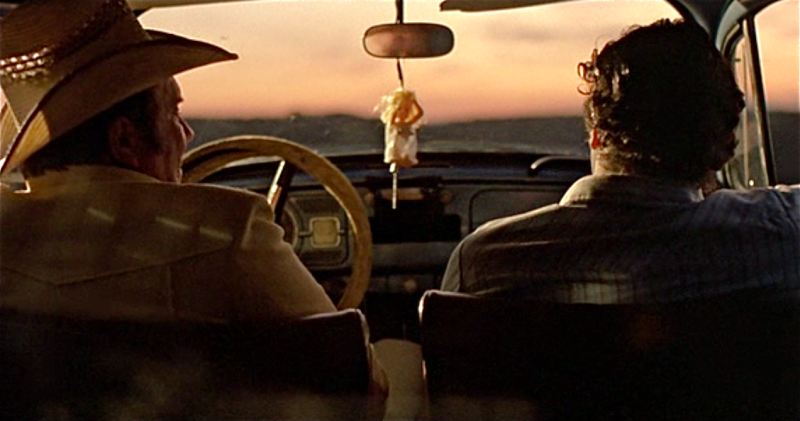 Blood Simple is a lonely movie. The movie sweats, cries and bleeds loneliness. The road the two lovers, Ray (John Getz) and Abby (Frances McDormand) drive down at night, opening the film, is lonely. Never mind that they are together and about to consummate their union in a hotel room – it’s a lonely road – as remote as Hank Williams’ “Lost Highway,” as friendless as Tom Neal hitching a ride in Edgar G. Ulmer’s down and dirty Detour. And the hotel doesn’t feel so uniting either – lonely cars rushing past, casting shadows on the wood-paneled walls and dingy white sheets. Is it romantic? Not really. The bar that the cuckolded, perpetually fuming Marty, Abby’s husband (Dan Hedaya), owns and runs is lonely – he seems to live in the back of that place, and only at night, feet up on the tables in the neon-bathed blackness, sweating and stressing, talking to a sleazo PI with contempt. When he attempts, miserably, to woo a pretty patron at the bar, she amusingly tells him to get lost (“Now that I’ve communicated, why don’t you leave?”). No one wants this man. And he knows it. It’s a lonely old world – and we even begin to feel sorry for him, even though we really shouldn’t (he’s going to ask the PI to off his cheating wife and her lover, a bartender he employs). 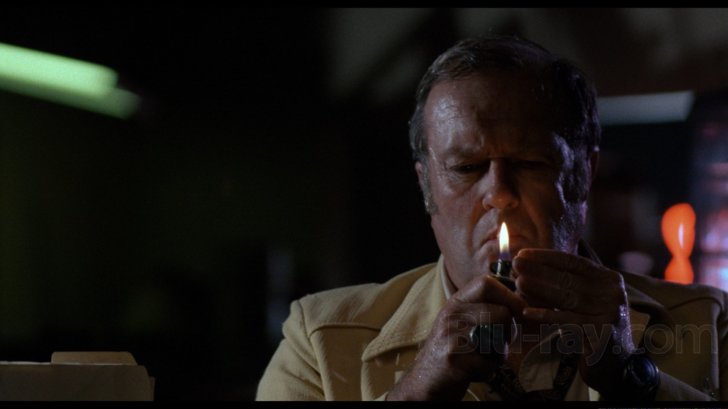 And then there’s the constant Four Tops song that nearly bursts out of the bar juke-box in bracing moments – “It’s the Same Old Song”— something that could work to ironic effect (and perhaps does to some viewers) but a tune that serenades the movie with its abandoned refrain: “Now, it's the same old song, but with a different meaning since you been gone…” That could be Marty’s song, or any of the characters, really, as their fates feel like the repetitions of the tune via the repetition of their mistakes, mistakes that make them even lonelier. The same but different. It’s no surprise that M. Emmet Walsh’s Private Detective Loren Visser opens the film with this voice-over, saying of the film’s setting, the lone star state of Texas: “Down here, you’re on your own.” 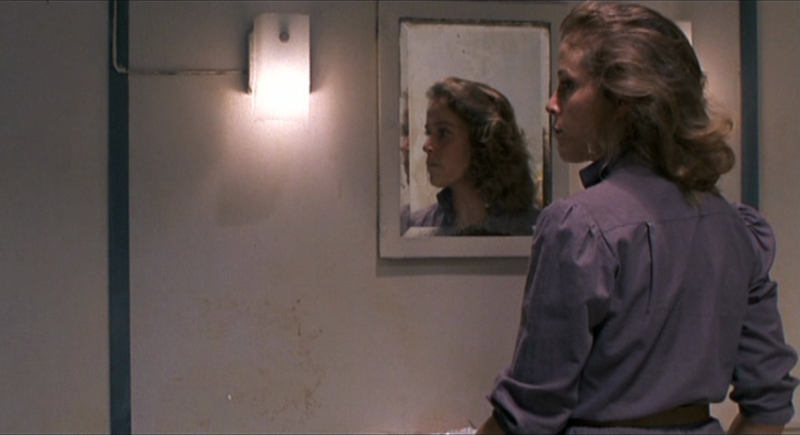 Not that the movie takes the character’s loneliness and murderous predicaments with solemn seriousness – it certainly doesn’t – but it doesn’t mock them or the noir genre either. Lifting our spirits (honestly, the movie’s sheer ingenuity and voice is spirit-lifting, if that is the right way to put it), there is something morbidly funny about how awful this all becomes, in part, because there is something morbidly funny about how many noir twists turn out. Here it’s Marty’s murderous plans double-crossed by Visser, and then characters not knowing what is truly going on or who did what or who is who – it even ends with Visser’s laugh when Abby mistakes him for Ray, Visser deliciously uttering mock-politely as he lies bleeding in the bathroom: “If I see him, I'll sure give him the message.” (That’s all I will say about the plot if you haven’t seen the movie, just watch). It’s this offbeat, mordant, but very human humor mixed with startling bursts of violence and striking, singular style (Barry Sonnenfeld as cinematographer – his first narrative feature film) that makes this 1984 neo-noir directed, written and produced by Joel and Ethan Coen (their first movie) still feel so refreshingly alive. Yes, alive, even as almost everyone in this movie is likely gonna die soon (I won’t say who). As some 1980s and 1990s neo-noirs show their age, or feel too soaked in their own style for the sake of style, Blood Simple remains timeless. 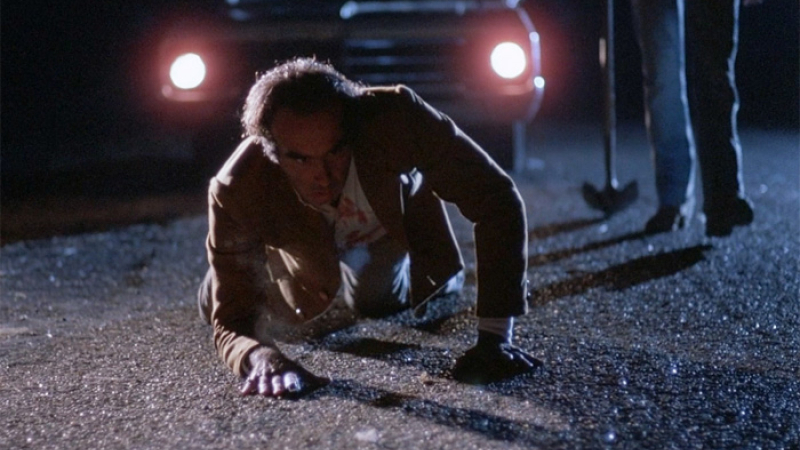 The title is taken from Dashiell Hammett’s “Red Harvest”: “This damned burg's getting me. If I don't get away soon I'll be going blood-simple like the natives.” But as frequently stated, the picture is very much inspired by James M. Cain (whom the Coen’s revere – as they’re quoted via Ronald Bergan’s informative “The Coen Brothers”: “We’ve always thought that up at Low Library at Columbia University, where the names are chiseled up there above the columns of stone—Aristotle, Herodotus, Virgil—that the fourth one should be Cain.” Bergan says they’re being hyperbolic and he’s probably right but I am not so sure…)

As Bergan states, however, the picture isn’t as sexy as Cain, and he’s right. And this is to the film’s benefit – it’s not trying too hard to be hot, it’s not doling out a bunch of now clichés aping pulp and noirs that were very sexy (as Cain could be), that make a few neo-noirs of the 80’s and 90’s now feel a bit forced at times. Decisions were made here that were smart – the “femme fatale” doesn’t come sashaying into an office gussied up or speaking in sexy low tones, rather, she looks like a normal but very pretty woman (on that though: I revere the sexy sashaying femme fatale but it must be done with ease and real charisma -- some actresses are brilliant at it). There are no “let’s be noir” saxophone or saxophone-like moments (I might just imagine this happens in other neo-noirs so forgive me) and instead the music, by Carter Burwell (his first, marking a long future collaboration with the Coen’s), is melancholic and haunting. Even the constant sound of the ceiling fan and the neon-bathed bar go beyond just the style and remarks more on the film’s sad beauty, tension, and mood – it is suffocating over sensual. And the final shootout is visually bravura, scary and wonderfully bizarre. And even funny. The filmmakers respect the genre (and continued working within it or in movies that contained an element of it  –  among them – Miller’s Crossing, Barton Fink, Fargo, The Man Who Wasn’t There, and No Country For Old Men which brought them back to Texas) but also see how inherently funny and absurd it can become. And without slipping into parody, which, in one early interview, Joel Coen makes a point to clarify: “We never looked at it as a parody though, from our point of view we were always attempting to do sort of a fairly straight-forward thriller, we just wanted it to be as humorous as possible.” 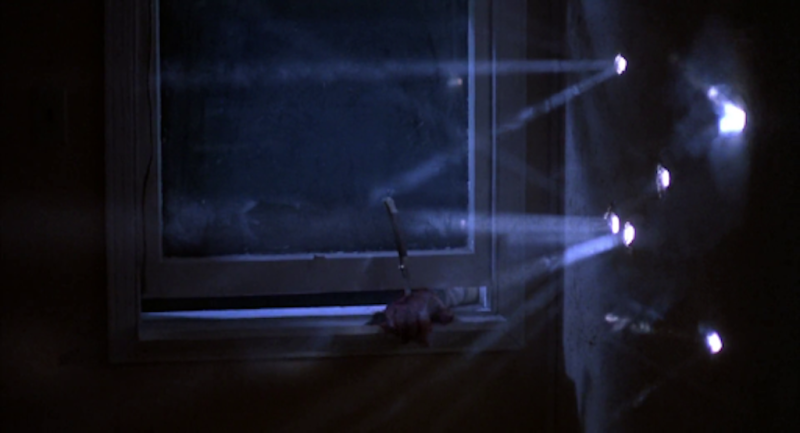 There is indeed something humorous about how much these lonely characters will endure and then, something truly exciting about how much they try (and fuck up). Walsh (who is brilliant here – all suited up with that cowboy hat, shit-eating grin, and driving that VW bug) says something that is both resilient and gross, and also hilarious. And also a weirdly beautiful literary line - hard-boiled and Southern Gothic: “Give me a call whenever you wanna cut off my head. I can always crawl around without it.” In an effectively disgusting way, Walsh’s Visser becomes the least lonely character in the movie. Even if he may die, with those fantastic lines he utters, and that laugh, he will leave something – a memorable trail of slime. That’s not nothing.