Lizabeth Scott & Too Late For Tears 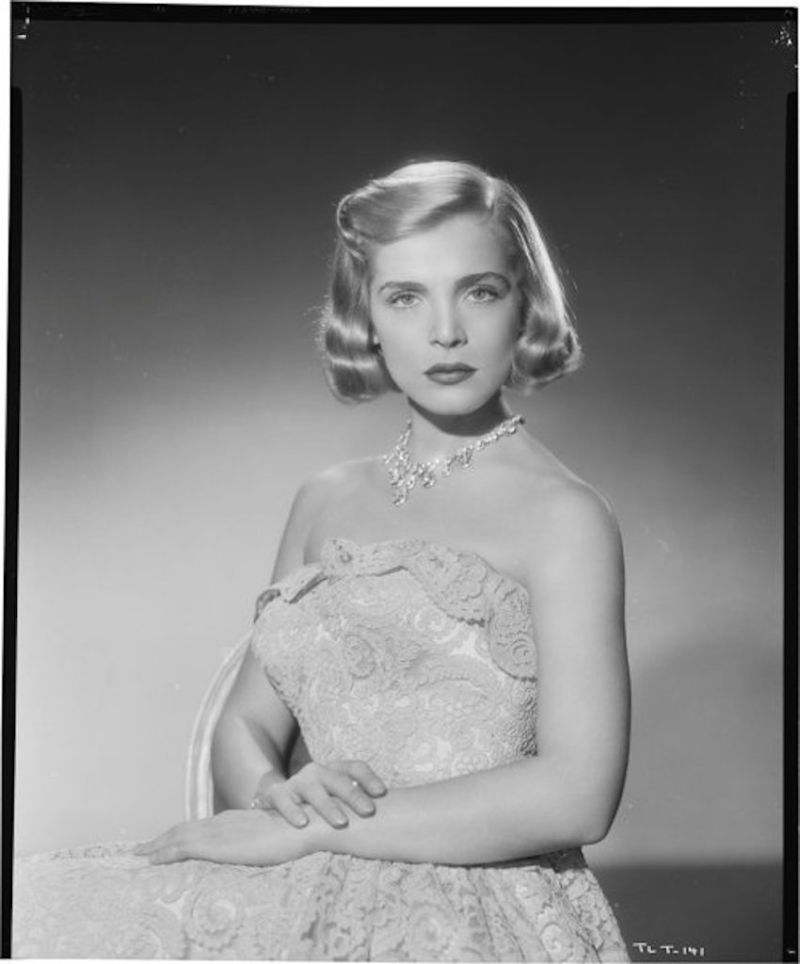 A somewhat short riff on Too Late for Tears...

“What is it, Jane? I just don’t understand you.” So asks Arthur Kennedy’s upright husband to Lizabeth Scott’s kinked, cryptic wife in Byron Haskin’s Too Late for Tears, a movie as much about one woman suffering her own private hell (infernal boredom with the late 1940’s bonds of traditional marriage, a disgust with patronizing rich people) as it is about a coveted bag of loot. And of course, murder – murder enacted by this “femme fatale” who hides her new furs in the place her husband wouldn’t look and she likely loathes – the kitchen. (He, in fact, finds them and confronts her, and this is where I wonder if he spends more time in the kitchen than she does – which makes me like him more) But she’s not hiding her luxury pieces because she bought them with just his money. The money, in many ways, is her money. Money that quite literally dropped into her lap (dropped into the back seat of her car). Money he is nervous about. Money he didn’t earn. Money she wants to keep. Money that, for her, means freedom from convention. Money means security and fun. For her. He views it with understandable apprehension. He states: “I just don’t understand you,” and you ask yourself if he ever did. 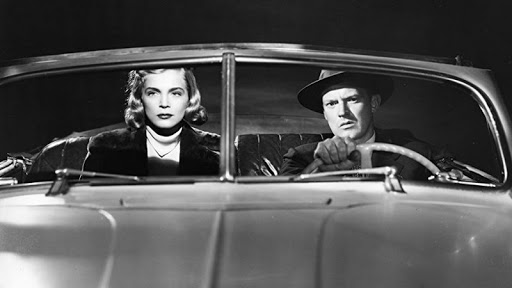 The movie opens with Kennedy’s Alan and Scott’s Jane driving to a swanky get together one evening in Los Angeles. Jane, cool and beautiful and at times otherworldly in that distinct and timeless Lizabeth Scott way (she’s both dreamy-eyed and steely, rough voiced and soft, vulnerable and determinedly self-sufficient, smart as hell and spacey), objects to attending. Why? She’s says why. And she's pretty honest about it.

Jane: I... I tried to tell you before we left home. I... I just don't like being patronized, that's all. I... I don't think I can take another evening of it.

Alan: Patronized? Oh, sweetheart, Ralph is one of the nicest guys I...

Jane: You know it isn't Ralph. It's his diamond-studded wife, looking down her nose at me like... like her big ugly house up there looks down on Hollywood. Please. I'm just not going. Slow down and find a place to turn.

Jane: Please, Alan. I mean it. I'm just not going.

They don’t go to that "patronizing" party because at that very moment, as Jane physically attempts to get him to turn the car around, a bag of loot is thrown into the back of their car by a mysterious sender. God? The devil? Whoever it is -- of all the good luck. And bad luck. When Jane discovers their devil-god-given bounty, she takes charge in a way that befuddles her husband and delights the viewer (we can’t help it  -- Scott makes her such a strange pleasure). Alan never saw this side of her before? He knows her financial frustrations, but what the hell does he think his wife does all day while he’s at work? Stare at recipes of meatloaf? Gleefully chat with his sister who lives next door? It’s not that you don’t feel for Alan, you do (and especially up to the point where she does him in – in one of those little boats in Westlake Park). And as Alan watches Jane becoming more and more obsessive, you start sensing a fatalism in him too. Not just because of her, but because of what he’s supposed to mean as a man— and as a provider. Or, perhaps, what he’s supposed to mean as a good person. Alan wants to report the money to the police, and Jane wants to keep it. So, when the two return home, managing to get past the real recipients and the cops, they empty out the estimated 100 thousand on the bed. Alan is concerned. Jane is practically orgasmic with all of that green luxuriating on the sheets. Surely, to her, this is a more exciting action than anything she’s ever seen or done on that mattress. 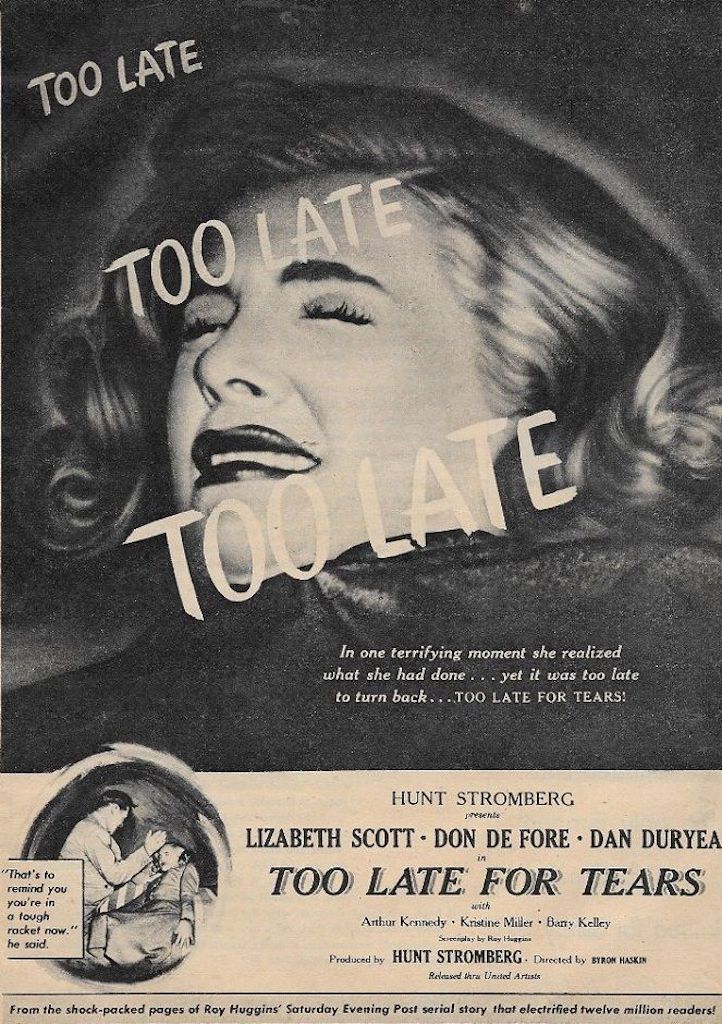 And then Dan Duryea shows up… Not right then but a few days later. Duryea’s Danny walks into Jane’s apartment and starts asking far too many questions -- but she maintains her cool. He takes in lovely Jane and as he gets to know her (or thinks he gets to know her) and begins gathering information that her husband may be cluelessly unaware of – that this lady is crooked, perhaps evil (maybe discontent?). Danny likes it. It gets him going. But Too Late for Tears (written by Roy Huggins from his serialized Saturday Evening Post novel) doesn’t cook up some rote hot-to-trot attraction between them. Never do we think Jane ever gets off on the bad boy sexuality of Danny, instead, she senses something else in him – weakness, depression, that’s he’s not as much the bad boy as he looks. And he’s not. Danny may come in all Duryea sleazy-cool, rolling his menacing words like a verbal cocked eyebrow, but you wind up feeling heartbroken for him thanks to Duryea’s vulnerable, moving performance. He’s two-bit, desperate, he drinks too much and he’s messed up even before he met Jane. He’s not even that great of a crook. We watch him unravel as he’s bettered by Jane time and again until he collapses, poisoned by her in his crummy little apartment. His female neighbor, maybe sometimes lover (we wonder – she seems to care more about him than anyone else does), doesn’t even assume foul play as the cops question her.  She exclaims: “He killed himself. Oh, God have mercy on him."  She cries. He didn’t kill himself, but in the fatalistic world of Too Late for Tears, he kind of did. 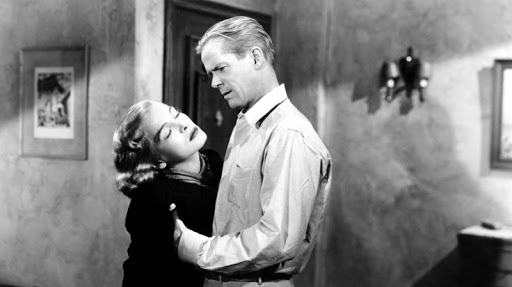 Which leads us back to Jane. She’s high tailed it to Mexico. I haven’t even mentioned the annoying man following her (played by Don DeFore – the most unlikable “good” guy and no one you care about) who knows her even deeper secret (that she murdered her first husband before Alan). I like to block that guy out because, honestly, you are, at this point, rooting for Jane.  Maybe you're not supposed to, but I think the movie actually knows this, in spite of how bad she is. How many women, especially when this film was released (1949) yearned to run away from home with 100K? And today, the viewer is asking similar questions – wouldn’t we be tempted by dirty money thrown into our car? At least for a second? Jane is murderous, yes, and we take a moment to lament when Alan and especially sad Danny are disposed of, but the remarkable Lizabeth Scott is such an intriguing presence, so diabolical, yet so dazed, so elusive, but so understandably disgruntled – a woman whom men want to mold as either the perfect wife or the perfect femme fatale (Danny coos: “Don't ever change, tiger. I don't think I'd like you with a heart.”) – that we cheer for her to smash all of those male preconceptions she's been saddled with. She’s all herself and she’s all she’s got. And so, in spite of her evil deeds, we want her to make it in Mexico. Seeing her in a nice hotel, in her elegant gown, gorgeous and in charge, with a new gentleman on her arm (she declines any nighttime offer – there is a suitcase of money upstairs after all), we think, for a moment, “Jane has made it! She made it!” We know she's going to eventually suffer for it, so we give ourselves that moment to allow Jane her freedom, even if she's done such terrible things. 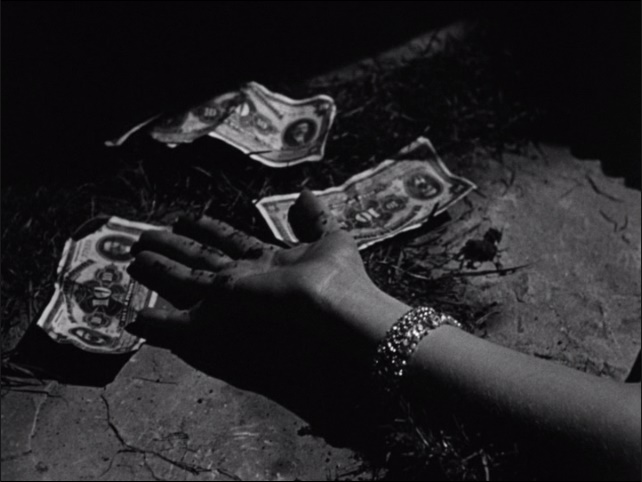 The picture swirls into a mad melodramatic dreamscape that, to me, becomes a kind of allegory of one housewife’s single-minded attempt to bust out of the binding expectations placed on her. I once compared the picture’s ending to Stanley Kubrick’s The Killing, in which another damn suitcase aids in the protagonist’s downfall. But Sterling Hayden, watching his money fly all over the tarmac, looks at it and says “Eh, what’s the difference?” Scott, instead, trips over her’s and tumbles off the hotel room terrace. It’s shocking and yet graceful.  She’s not watching the green fly away with the fatalistic acceptance of Hayden – no – she goes down together with it. She goes down with what she loves. At least she went down with that. And even in death, she creates a gorgeous tableau: clad in an evening gown, smashed on the cement, but looking like an angel, there is all of that money, her money, falling around her like snow. What’s the difference? She’s not getting married again, that’s for sure.