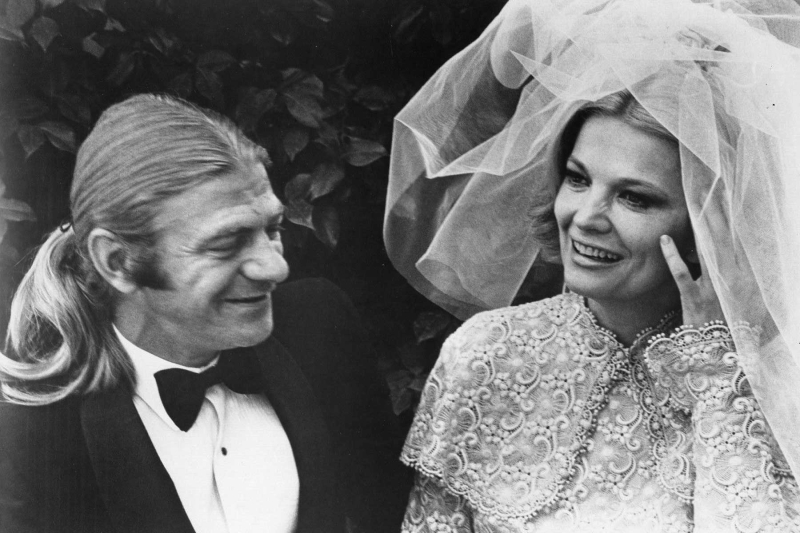 Here's my New Beverly piece John Cassavetes' romantic, poignant, emotionally volatile and movie-drenched, "Minnie and Moskowitz -- one of my favorite Seymour Cassel pictures. May the great man Rest in Peace. 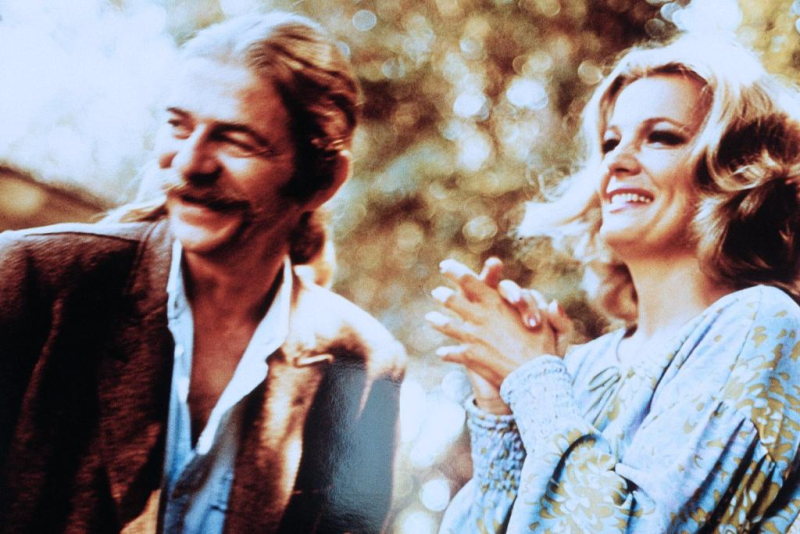 Movies set you up. That’s what movie lover Minnie Moore (Gena Rowlands) emphatically states to her older friend and co-worker, Florence (Elsie Ames), after the two women spend an evening out watching Casablanca. They drink wine in Florence’s dark little apartment and they talk; they talk like real women. It’s a disarmingly frank discussion between a much older woman with a younger woman about sex, men, doing what they can to please men (who seem to want everything from them, their heart, their soul, as Minnie states, only to learn men really don’t want it when they finally get it), loneliness and… movies. And yet, that “set up,” that fantasy, hangs over Minnie and Moskowitz in a complicated manner that neither damns the siren call of cinema nor negates their delusional pull. Perhaps we need movies. Perhaps we need them to realize we don’t need to believe in them? Perhaps to realize they’re often lovely, but often a lot of lovey bullshit? That’s how beautifully complex writer director John Cassavetes makes Minnie and Moskowitz  – it’s just not that simple. Nothing in the Cassavetes universe is that simple. 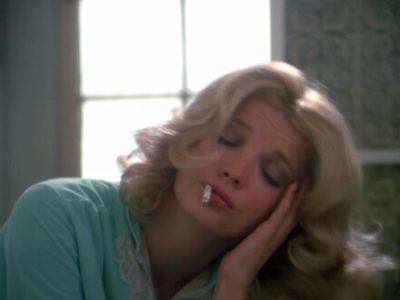 Minnie’s monologue is a potent clarification within a movie full of movies, a movie in which characters go to the movies, talk about movies, even drive past movie marquees. And that the film, set in Hollywood, was a studio picture, a supposed “youth movie” (if Lew Wasserman had his way) and also, according to Cassavetes’ biographers, a movie inspired by the director’s own courtship with his real life wife Gena Rowlands. It’s both a valentine and a warning tale. Don’t believe all that movie mush but don’t deny your feelings either. Don’t harden. Don’t get cynical. Don’t shove it all away. Love is the thing, but how we get there is a frustrating almost violent struggle. It is not gorgeous, suave and smooth, like Charles Boyer; it’s embarrassing, volatile and weird, like Seymour Cassel. 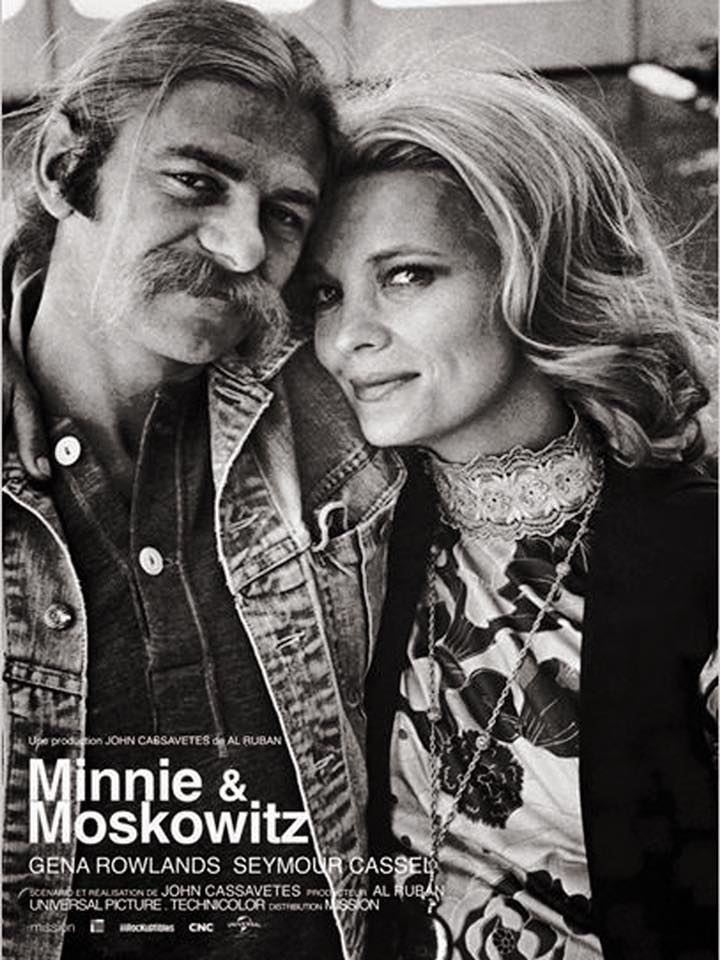 The picture works as a subversion of the romantic movie and the screwball comedy in that the “opposites attract” story is layered with pain, alienation and often at times, violence. The beautiful, blonde museum worker, Minnie, in opposition to the scruffy, long-haired, unpredictable Seymour Moskowitz – a man whom she states straight to him, is not her romantic ideal – could not be any more different. But Seymour is not going to take no for an answer.  And that’s where the movie builds and spirals and literally screams into another realm – where the adorable troublemaker woman, Katharine Hepburn of Bringing Up Baby, will win Cary Grant by following him, nearly stalking him and perpetually putting him in peril, becomes the obnoxious almost unlikable man Seymour, who causes fights and arguments at every turn. A man we’re not sure about. Should Minnie even succumb to this guy? Is this healthy? I believe Cassavetes would say yes. After all it’s a version of him (and that marriage lasted until his death). But as a movie, we’re not so sure how this will end up, making it extra poignant and multidimensional. We’re happy they will feel happy, but… will it last?

Well, who knows? And considering Rowlands’ Minnie has been contending with so many messed-up, oppressive and abusive suitors at least Seymour sticks up for her, clumsily, when the moments arise (and they arise a few times, sometimes, his own fault). When she returns home after her night with Florence, a man is in her apartment. That man turns out to be her married boyfriend Jim (played by Cassavetes), whom she thinks she loves. What does he do? He hits her and knocks her on the ground. Why? Because he’s jealous (he justifies his behavior with the “I love you so much I just get jealous” routine.) Of course he’ll go back to his wife (after his wife attempts suicide) and Minnie’s left both depressed and disgusted. Then, in a standout scene, there’s another man (in a complicated scenario, he’s an accidental date) who berates her after she says she’s not interested in him over lunch. In a funny, sad and acerbic moment with a magnificent Val Avery as the never-in-a-million-years potential partner, Minnie listens to all he can give her (he’s very aggressive and nervous about this) only to get hollered at upon rejection: “Blondes. What is it with you blondes? You all have some Swedish suicide impulse? Huh? I took a blonde to lunch once, next think you know she wanted me to kick her… Bleached blonde, 90 dollar a week worker. I just wanted to take you out! Give you an education! Show you there’s a little love and understanding left in the world!”
And that’s where Seymour steps in to save the day. You know, like in the movies. Sort of. He really starts driving poor Minnie insane, even when he takes her to Pink’s (there are so many wonderful Los Angeles details in this movie). Seymour has just freshly arrived in L.A. from New York where his dating life wasn’t exactly aces either. But we learn that he does have at least one thing in common with Minnie – he loves movies too. The picture begins with Seymour watching The Maltese Falcon and also having a conversation with a fellow loner, in this case a stranger in a diner played by the brilliantly bizarre Timothy Carey (who adored working with Cassavetes). Carey is the unforgettably named Morgan Morgan and in a magnificently manic, sweaty scene, talks and yells about a lot of things: Aging, the kind of women he likes, his wife’s death… and again, movies. Seymour asks: “You like movies? I just saw a movie called The Maltese Falcon. You ever see that?” 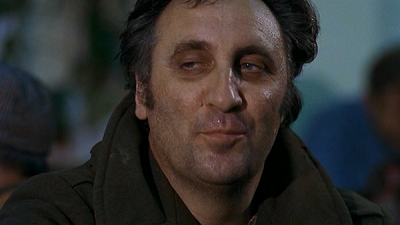 Morgan Morgan: “Uh-uh. I don’t care anything… I don’t know anything about cinema. I don’t like it. Bunch of lonely people, looking up. Forget about it.

By allowing all of these scenes to unfold with remarkable but very real people, movies and real life intertwine in Minnie and Moskowitz showing both the naturalism and uniqueness of everyday individuals. Real people may not be movie idols, but they’re often interesting and different. And scary. Seymour’s love for Minnie verges on the frightening. He violently threatens, fights, yells and punches things in her bathroom (reminding me of the rage-filled, frustrated love outburst in Paul Thomas Anderson’s Punch-Drunk Love only, Adam Sandler’s Barry Egan explodes with violence from repression whereas Seymour is constantly at full volume). Seymour exclaims: “That’s what happens when you love someone! You punch doors! You make a fool of yourself!"

But there’s a lot of tenderness here too. And, in one scene, while watching Casablanca together. Seymour tells her that she looks like Lauren Bacall from the side. She smiles and leans her head on his shoulder. Movies. When they take a night swim, they return to her apartment and she begins singing the song she sang earlier in the film with loneliness towards Jim: “I love You Truly.” But this time Seymour sings along. It’s a lovely moment and it’s another movie moment. The song is indeed evergreen, many singers have sung it, but I thought of Ward Bond and Frank Faylen lovingly serenading James Stewart and Donna Reed on their wedding night in Frank Capra’s It’s a Wonderful Life. Cassavetes loved Capra.

From Ray Carney’s “Cassavetes on Cassavetes”: “I loved Frank Capra when I was a kid. I saw Mr. Smith Goes to Washington and I believed in it. I believed in the people in our country and our society. I believed that the rich were not that bad and that the poor had a gripe, but that people could come together and that made America a better place for me to live in and be proud of. And every Capra film I’ve ever seen showed the gentleness of people. There were corrupt people within that framework, sure. The poor people were always oppressed, but they were oppressed with such dignity and loveliness that they were really stronger than the rich; the rich had to be educated. I grew up with that idea. I grew up on guys that were bigger than life. Greenstreet, Bogart, Cagney, Wallace Beery. Those were my favorite guys. I’d think, God, what a wonderful life they had – to have an opportunity to stand up there in front of people, in front of a camera, to express yourself and be paid for it, and say things and have it mean something to the audience.”

Movies a conspiracy? Is it a wonderful life? Like Capra, John, Gena, Minnie, Moskowitz, Florence and Morgan Morgan, it’s never that easy to answer.