He Ran All the Way: John Garfield 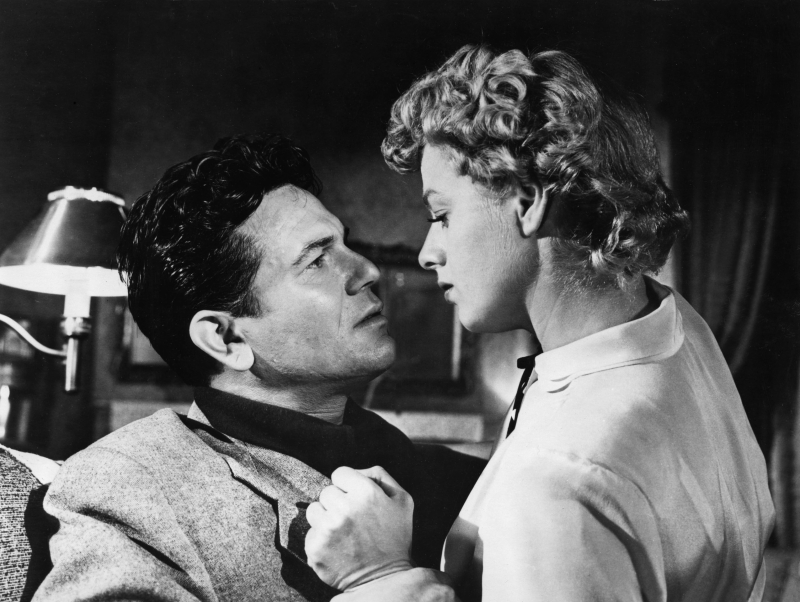 My full piece from Ed Brubaker's Kill Or Be Killed

“When an actor doesn't face a conflict, he loses confidence in himself. I always want to have a struggle because I believe it will help me accomplish more.” – John Garfield

Nick Robbey is trapped. Everywhere. No matter what. The man can’t even escape this claustrophobic life he trudges through while sleeping. Sleep – a place where you can run through sunny fields, bask in wealth, make it with beautiful girls, or just truly, actually sleep – enjoy the warm cocoon of dark nothingness; your body restoring itself for another good or bad day of something – anything – at least you slept well. No such luck for poor Nick – you get the sense this fella is always being chased and traumatized and worried and haunted, awake or not. Running. All the Way. Where? By the end you see where and it’s not through some sunny field – it’s staggering in a gutter with Shelley Winters close behind. 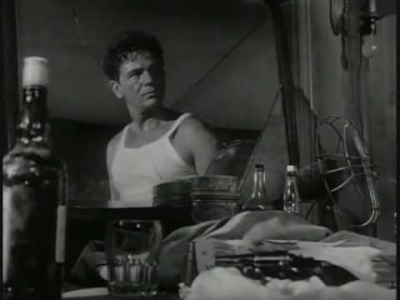 That Nick is brilliant John Garfield in director John Berry’s tough, poignant and doomed (on and off the screen), He Ran All the Way – a movie that opens with this beautiful loser tossing and turning in his bed, sweaty and convulsed in bad dreams. But he wakes up to something worse – reality – his mother (a harsh as hell Gladys George). After hollering at him for moaning in his slumber (no maternal instinct in this woman), she pulls open the dingy shades of his room and screeches: “If you were a man you’d be out looking for a job!” His reply? “If you were a man I’d kick your teeth in.”  This ain’t no happy family. But family will become something important to Nick in this picture – even if he has to force his way into one.

When this over-age punk emerges into the light of the city streets, seemingly to do something else (perhaps look for a straight job?) he’s beckoned by one of his criminal friends – wormy Al (Norman Lloyd) – who convinces poor Nick to join in on a payroll robbery. Nick’s worried – he tries to discuss his bad dream, he was running, running, and he’s seeing it as some kind of portent of doom (he’s not so dumb after all). Al brushes it off and talks of his dream – wealth and sunny Florida. They go on that heist and the movie wastes no time in showing it all go to hell very quickly – like so many two-bit crimes do. Nick winds up killing a payroll guard. Shit. He didn’t intend for that. He didn’t want to kill someone today. He’s probably never really wanted to kill anyone, not even his mother (later on in the picture she doesn’t give a damn if he dies or rots). But he’s gotta run. He’s got the case of money (freedom! Yeah, sure) and so he runs and runs. It’s like his dream never really ended. He runs all the way to a public pool, a curious but ingenious place for a quick hide-out, shoving his money in a locker next to the guys with wet towels and swim trunks, Nick looking out of place but tough enough for people to just get out of his way. He’s jittery and worried about his locker and you feel for him, no matter what, something the movie and Garfield hold on to as rough as he gets. You can’t help it. 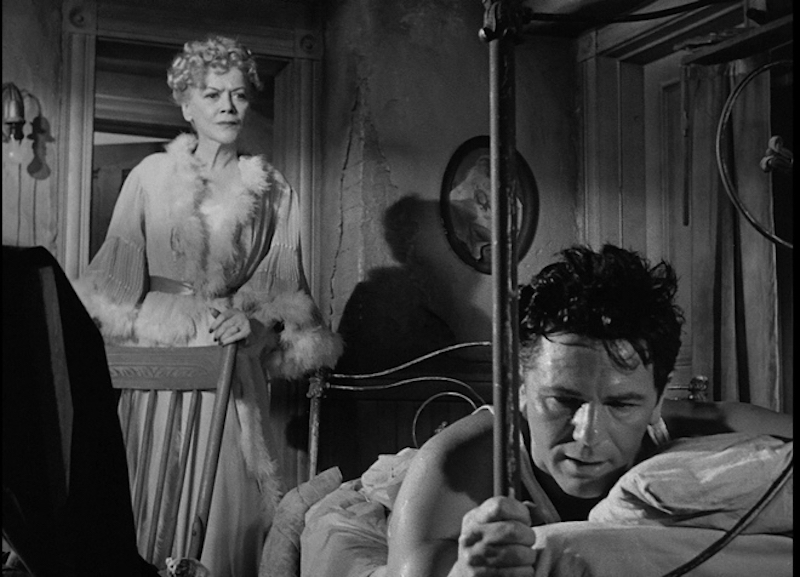 This guy was born under a bad sign and you know he’s never been treated right. There’s a vulnerability here that’s not forced by Garfield, it’s just there, so much so that even as he changes into trunks and jumps into the water, you feel for him. It’s so normal, but not. And water— it should be cleansing, so refreshing but it isn’t. However, it is there that he meets another worried, sad soul – Shelley Winters’ Peg Dobbs. She’s shy and charmed by this handsome creature offering her such attention in the pool (as usual Shelley has some weird fate with water – see A Place in the Sun, The Night of the Hunter, Lolita and The Poseidon Adventure), and soon she’s bringing him home to family.  Poor Peg. She thinks this is a proper pick-up and she landed herself a sexy bad boy (with depth) John Garfield. Even her sweet, welcoming family – Papa Dodd (Wallace Ford) and Mama (Selena Royle) along with kid brother Tommy (Bobby Hyatt) – seem a bit excited that she’s brought over this good-looking stranger, even if he’s sweaty and nervous and a little feral. They even go out for a spell, presumably so she can be alone with him. When they return, the entire family is held hostage. 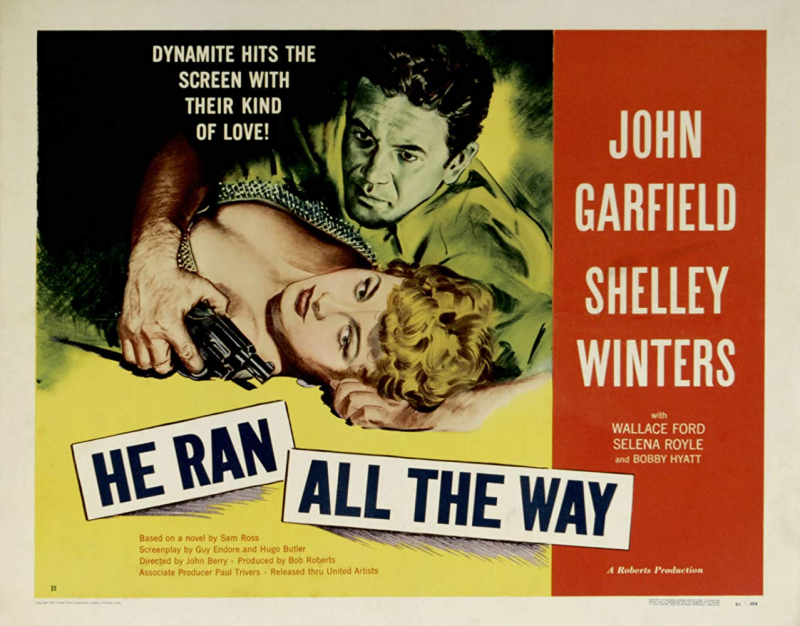 It’s an intriguing set up – Nick running and holing up with this terrified family (a la The Desperate Hours before that movie was made, and this one is the grittier, better version) – and enclosing himself in further— a trapped rat. The romance, of sorts, between Garfield and Winters just feels tragic and awful – there’s nothing sexy or come hither about it. But as he’s pacing and planning his next move, he grows closer to the family, he does anyway, they really don’t – a nice family, something he’s never experienced. Watching him interact with the brood is fascinating. He threatens, sure, but he also wants to have family time, even setting up a turkey dinner for everyone to eat. The patriarch does not want to. He just won’t. And then Nick gets angry, forceful, hurt, actually. Eat the turkey! (I always think, Jesus Christ people, just eat the goddamn turkey). 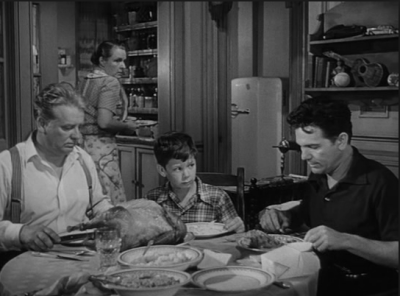 So, it’s constant stress and worry and where he is going to go? Run off with Peg? Really? And why does it become increasingly important that this family accept him? Or in any way love him? Well, clearly he desperately needs love – but he has to reject it because, really? By the end of the picture, that’s what he’s screaming about to Peg in a beautifully acted (and shot) sequence as he shoves her down the stairs with him. Love. He’s yelling that she never loved him. Never. With the family turning on him, there’s no love anywhere in this world: “Nobody loves anyone. You, your old man, your family, the cops, my old lady, Al Molin! Garbage. Garbage!”

It’s a powerful scene that kicks you in the gut. You really believe John Garfield. You believe every move he makes here, in fact, and every line on his face says something. Ingeniously shot by James Wong Howe with some powerful deep focus close-ups, particularly of Garfield’s face, you get a visceral sense of dread – you want to wipe the sweat dripping from Garfield’s brow, and his eyes are so expressive and troubled that even when he twists into hoodlum mode, slapping Ford around or scaring Winters, you know it’s not out of mere power (though he wields it over them) but out of absolute panic. And watching this film now, and knowing what happened to its lead and its makers – damn. The experience is extra tragic. Victims to one of cinema's darkest, most shameful moments, the scabrous House of Un-American Activities Committee, Berry was blacklisted, two of the screenwriters, Hugo Butler and an uncredited Dalton Trumbo were blacklisted already, Lloyd was blacklisted for a time (he came back, thankfully, and is still with us) as was Royle. And of course, John Garfield. A serious actor and movie star (he trained in the Group Theater), a progressive man (and patriotic, he helped create The Hollywood Canteen) was called to name names and unlike many other actors, writers and directors, Garfield, both a once young street tough and a man of principle, refused to rat. Hero. 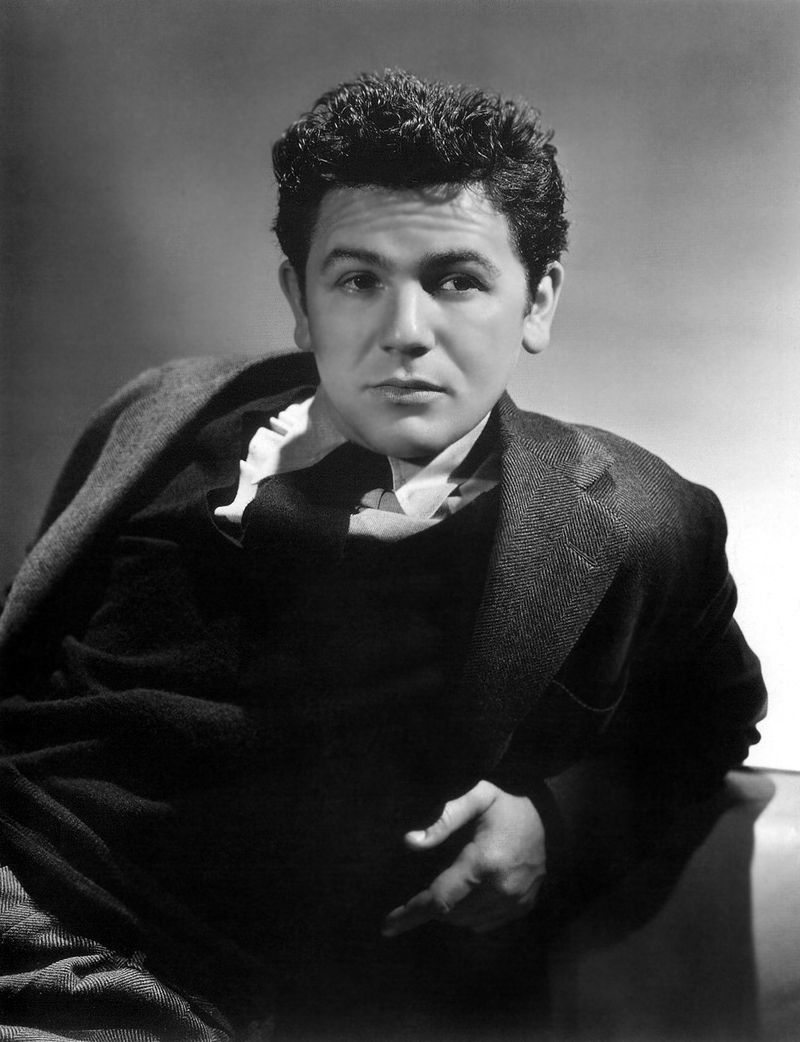 Work was then harder to come by and at the young age of 39, this great actor died of coronary thrombosis. Many speculate an already present heart condition was worsened by the stress caused by the House's inquisition, and that is probably true. Here was one of cinema’s greatest actors who looked fantastic on screen, pure charisma and craft and a precursor to Clift, Dean and Brando. His career with intense, funny, heartfelt, oftentimes roughly romantic and edgy performances in movies such as Gentlemen's Agreement, They Made Me a Criminal, The Postman Always Rings Twice, Body and Soul, Force of Evil, The Breaking Point, Nobody Lives Forever, Humoresque and so many more, was cut short because of the HUAC abomination. He Ran All the Way was his last movie. Watching the final shots of the picture – Garfield’s Nick staggering and slumping into that gutter – Jesus Christ, what a bad dream poor Nick had. Why didn’t anyone listen? Simple answer: no love. Well, we love you Nick. And we love John Garfield. And we’ll never forget him. He didn’t rat and he didn’t run.