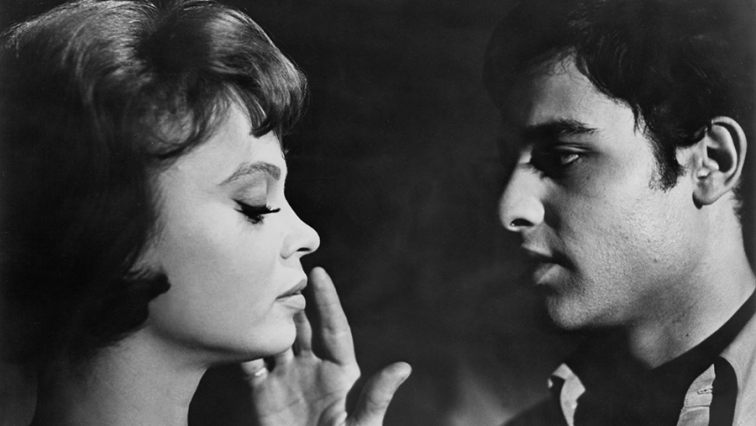 “I was a lesbian owner of a disco who fell in love with Juliet Prowse and got strangled on Ninety-third Street and East End Avenue with a silk stocking by Sal Mineo. Jesus, who’s not going to play that part?” – Elaine Stritch

Joseph Cates’ Who Killed Teddy Bear is a movie that lives in its own kind of sickly stunning, neon-blinking 1965 New York City nightfall – a terrifying and terrified world that’s drawn towards deviancy while desperately running from it. A world that punishes perverts via men who become so obsessed with punishing perverts, that they become perverts themselves; and perhaps even more demented than the nutjobs they bust. A world that observes the beauty of the pursued, but relishes, indeed pants over the beauty of the pursuer, focusing very specifically on the physicality of the depraved. And that’s a depraved Sal Mineo, which is really something quite unique and disquietly beautiful here. 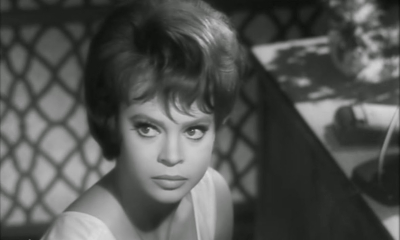 It’s a world in which an independent, intelligent female disco DJ – all health and sweet sexiness – a single woman who should be free enough to walk to work or to dance with unabashed joy, finds herself terrorized by an obsessed stalker who torments her with upsetting, escalating obscene phone calls. He also watches her. And follows her. In fact, he works with her – she just doesn’t know it. Kind-hearted woman that she is, she’s nice to him.

But she, Norah (an impressive, lovely Juliet Prowse) is a brave heroine, and one based on the very real feelings women have when being stalked. She doesn’t want her world enclosed by a psycho. She doesn’t want to be constantly scared. She doesn’t want to check her back every time she leaves her apartment. She’s scared but it pisses her off that she’s scared. Because now she will have to check herself – that’s the world the movie also walks us through – Norah’s loss of freedom as this crazy life rages outside and around her, bodies dancing, hair swinging, to the music she plays. She can’t live her life trapped like this anymore. 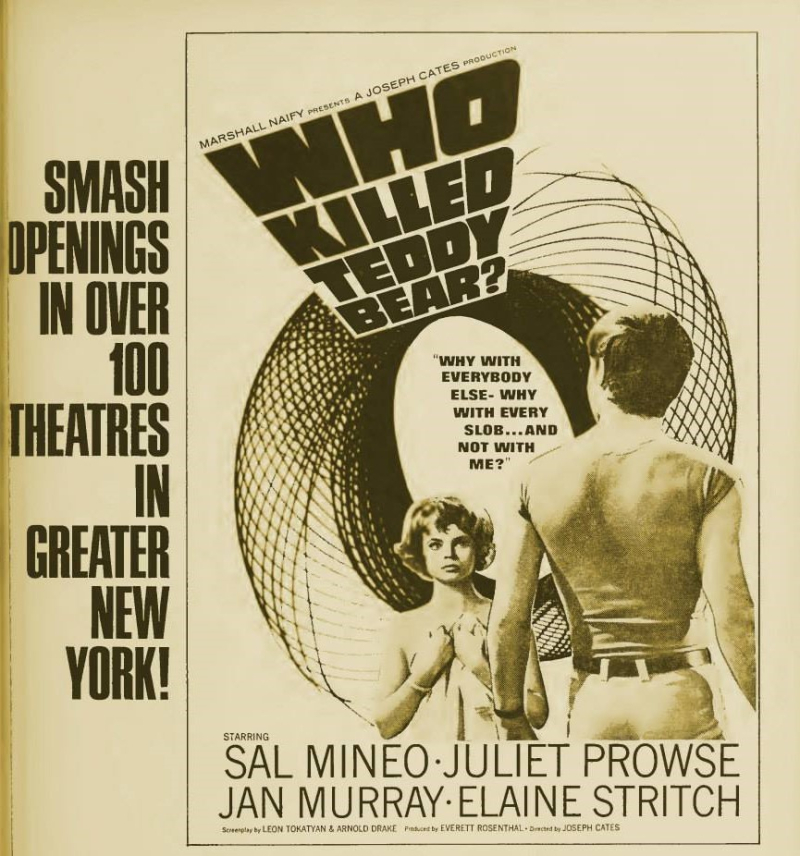 So then there’s the police – who wants to drag the police into all of this? As a woman she senses this will become a whole other drama, or useless. But she must involve them, and so the police detective who comes to help her, Lt. Dave Madden (Jan Murray), does not arrive in the form of the upright, steadfast F.B.I. agent Glenn Ford in the much tonier obscene phone call thriller from a few years before this one – Blake Edwards’ darkly beautiful Experiment in Terror.  No, the detective who comes to her aid is one who listens to disgusting cases on tape, of men saying sick-o things to female victims, and within earshot of his ten-year-old daughter (when his child sees Norah she asks her father if she’s a “hooker”). He also has books like “Sadism and Masochism: Vol. 1” and magazines like “Teenage Nudists” splayed out on his desk in full view of his little one. Research. Indeed it is research, but this guy really really loves his research. His own Police Captain is even creeped out by him and says: “Dave, you’ve gone over the line. You’ve joined them.” You’ve joined them.

But, as Dave protests, his daughter has to know there are perverts out there in the world and he’s not going to shield her from it, even if apparently, he becomes one himself. After all, his wife was raped, murdered and mutilated by a psychopath. Oh. Yeah, that part. As you can imagine, Norah is a little disturbed by all of this. But, hey, this is all she’s got right now. Her lesbian boss (played by a fantastically acerbic Elaine Stritch) makes a pass at her, and in a wonderfully shaded scene, nice Norah keeps saying, “If I’m wrong, I apologize.” She doesn’t want to offend this woman but she also wants her the hell out of her apartment. Well, her boss leaves, and is then murdered by her stalker. OK. Now what? And what the hell can she say to a police detective after he tells her that kind of backstory?

What the hell do you say or make of anyone or anything in this movie? It’s a potently bizarre little cookie, but it’s not entirely foreign in terms of our primacy and darker curiosities. If we’re truly honest about how much as viewers we are drawn towards darkness and depravity – in terms of watching it – and the mixed emotions of exploitation – Who Killed Teddy Bear? plays less like a trashy curio and more like the compelling character study that it is. I don’t really think there’s anything trashy about this movie at all, in spite of its reputation. Of course we are a little disturbed, and at times, thrilled and strangely delighted, maybe even nervous by the odd characters – chiefly, the stalker’s little teenage sister. She has been brain damaged after seeing him sleep with… their mother? A family member? (I’m still not certain) and falling down the stairs. There are incest vibes are all over these two, and yet, he’s always trying to protect his sister, unlike the weird-ass police detective who think his daughter should actually hear obscene phone calls as she’s going to sleep. But it’s not necessarily the lurid content of the picture that’s interesting in and of itself – it’s not there for cheap thrills or laughs – it’s the curious mixture of dual pathologies viewed with a tonally discomforting poignancy. That tonal discomfort and power is in large part due to the picture’s real star – the obscene caller, Lawrence, played by a brilliant Sal Mineo. 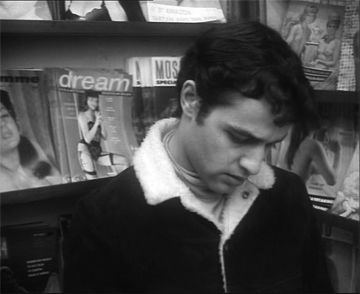 It’s one of Mineo’s greatest performances and shamefully not seen or discussed enough. Mineo’s large-eyed vulnerability so powerful in Rebel Without a Cause, Crime in the Streets and Dino, is heightened and morphed into a grown-up man here – primal and strong and damaged and, yet, disarmingly helpless. He’s sick in the head but something made him that way. That the picture is fixated on him sexually was a bold move for Mineo. Mineo said:

Those jokey shorts didn’t exactly help his career, in spite of some fine notices for his performance, which seems unfair watching it now. The lingering on his body, and instead of Prowse’s (which is how it would normally go), is fascinating, and it happens in ways that manage to not feel exploitative, but more artful, more leeringly thoughtful, if that makes any sense. In this movie, it does. (Even Norah tells him he’s got a nice body) We’ve turned our eyes on the stalker – we stare at him. There’s the tightness of his clothes, an extended, bare-chested work-out scene where he seems to be powering through perversion (or stoking the fires), there’s a pool scene in which his suit is much more revealing than Prowse’s, and a dance in which Mineo’s shirt shows off his midriff – these scenes are all here to take in, but we truly think about what we’re looking at, because, how perverse are we? 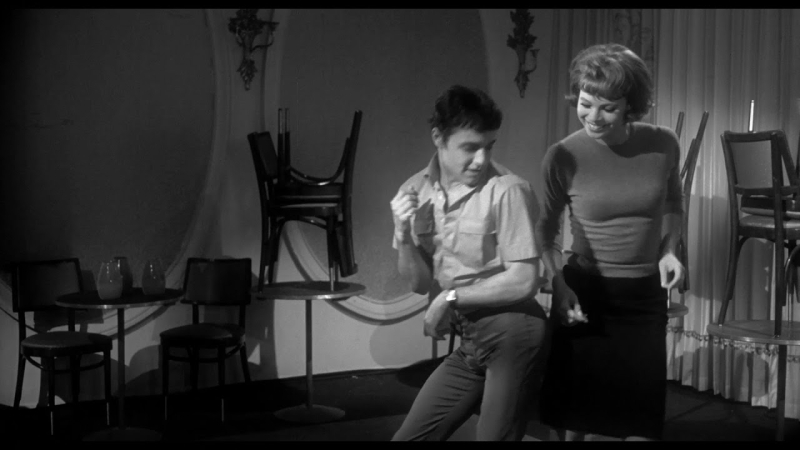 The movie turns the gaze back, makes us wonder what that weird police detective wonders (probably not Sal Mineo), and removes the idea of watching this movie to get an eyeful of Prowse. And, looking at how gorgeous Sal Mineo is – we ask, why must he be so sexually screwed up? Why can’t he just enjoy himself? Even Norah wonders this.

There’s a lot of wondering going on with Who Killed Teddy Bear? There is nothing like this picture – the closest I can compare it to is the pictures of Andy Warhol and Paul Morrissey or the novels of Hubert Selby, Jr. – there’s a downtown pulp and a gritty art to it – but it’s really in its own universe. The black and white cinematography by Joseph C. Brun (with Taxi Driver’s Michael Chapman as assistant camera) is gorgeous and experimental. I’m not sure why some find this picture junky – you can imagine Edie Sedgwick slinking into the frame and sizing up young Sal. 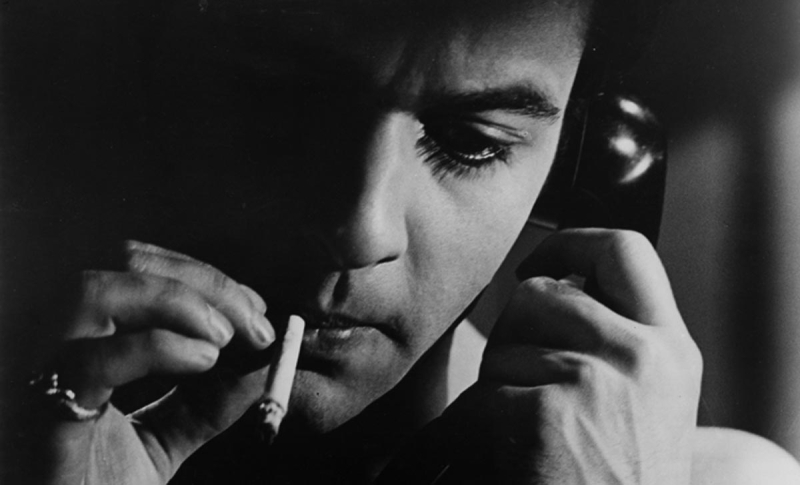 And Mineo takes this performance so much further. As I’ve written before about this picture, you might be thinking about beefcake, but it veers into a beefcake where violence and sex messes up a traumatized character’s mind, who happens to look like someone Lou Reed would sing about (someone like Little Joe). And then you’re thinking about Mineo, the actor, the characters he’s played before, and characters he is perhaps running away from as his career was changing. Take a look at your “switchblade kid” now. And, really, take a look. Everyone else in this movie does.