Christmas With The Cobweb 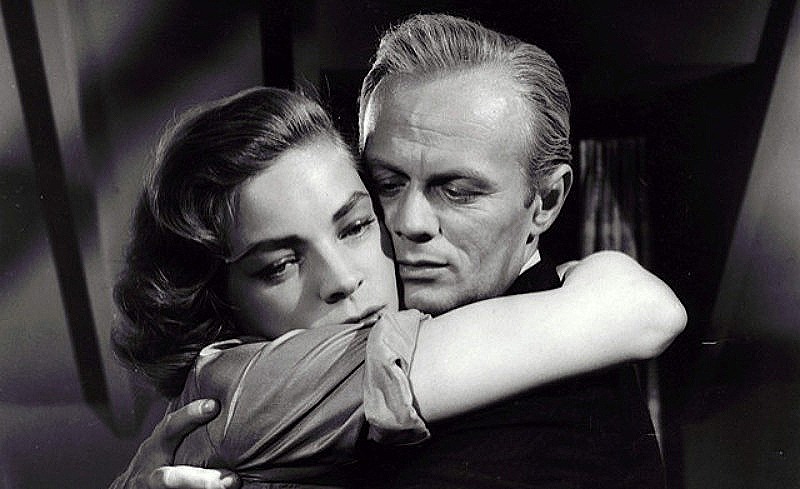 “On The Cobweb, I’d arrive on the set and there he’d [Vincente Minnelli] be up on the boom, zooming up to the drapes, and I thought to myself, ‘He’s really in heaven now.’ The bloody drapes. It was all about the goddamned drapes in The Cobweb.” – Lauren Bacall

The drapes. The drapes in the library of the high-end private psychiatric clinic. Those dreary old Lillian Gish Miss Inch chosen drapes just hanging there for decades – taunting, not only the patients, but the doctors even more – enough to cause tense confrontations, enraged phone calls and … if you put your subtitles on while watching the movie, “fabric ripping.” Anyone who’s seen Vincent Minnelli’s The Cobweb (1955) knows what I’m talking about because those drapes and the trouble they cause – who will order them, what will they cost, which material will be chosen, colors, colors are so very important, who will design them, will it benefit the patients, will it help Gloria Grahame’s marriage, will it ruin her marriage, will those drapes ruin everyone, will people die – are the dramatis impetus of the entire movie. It sounds absurd – drapes – and at times it very much wonderfully is, but it’s an absurdity rooted in a reality in which something as supposedly inconsequential as window dressing pulls out heightened emotions in various people – people at vulnerable stages in their lives. Focusing on those damn drapes, something to prettify a room, to obscure outsider view, to showcase taste, it is also a focus that could create anxiety and depression. It also works to detract a person from their actual problems. I’m fine! It’s the drapes!

What’s powerful about The Cobweb is that the coverings always unmask rather than obscure – which speaks to the filmmaker as well – color, patterns, furnishings, design were important to Minnelli, who shoots these details with such intensity you can practically feel the hues vibrating from the scene (Some Came Running, The Bandwagon, Meet Me in St. Louis, An American in Paris, Two Weeks in Another Town, are some examples – his Vincent Van Gough biopic, Lust for Life, was reportedly his favorite picture, not a surprise for a few reasons, some being Van Gough’s bold colors, thick strokes and then, his madness). In The Cobweb, swatches of vivid drapery fabric sitting on a table between two characters, indeed just the word “swatch,” has never felt so lacerating and intense. Whenever Gloria Grahame holds a swatch in her hand or tosses it on the bed, I get nervous. It’s not crazy to think this material would attract Minnelli. As Mark Griffin wrote in “A Hundred or More Hidden Things: The Life and Films of Vincente Minnelli”:

“For a decor-obsessed director like Minnelli, being handed a story in which interior furnishings play a pivotal role must have seemed like a gift from the cinematic gods.” ‘The Cobweb was a psychological story that appealed to me greatly,’ Vincente said. ‘The thing that attracted me was that it wasn’t about the inmates, although the inmates happen to be strange. It was about the doctors and the foul-ups in their lives… It was so rich in possibilities that I volunteered to direct.’” 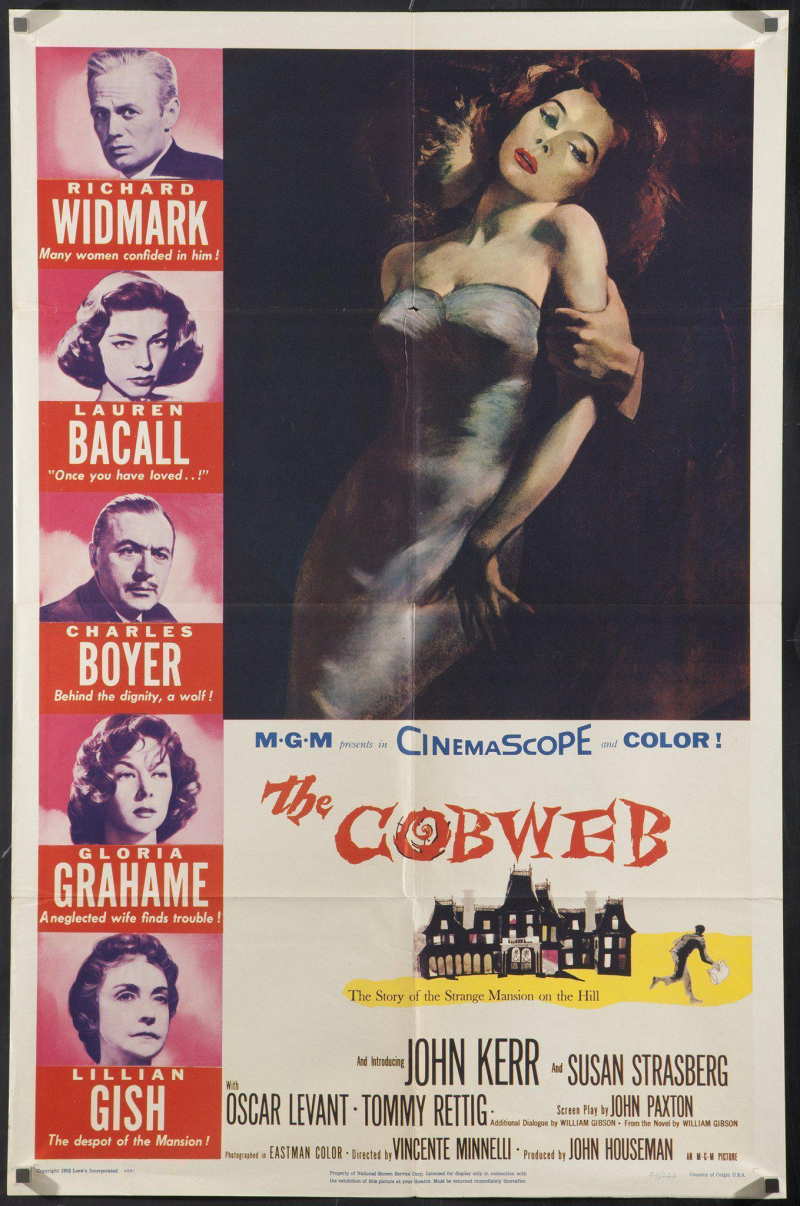 And he fulfilled all of those possibilities directing this movie (in Cinemascope, gorgeous Eastman Color, cinematography by George J. Folsey, a 12-tone score by Leonard Rosenman), with a cast that’s so star-heavy, you expect an Irwin Allen earthquake to shake up such icons. Nope, all Minnelli needed were drapes: Richard Widmark, Lauren Bacall, Charles Boyer, Gloria Grahame, Lillian Gish, Oscar Levant, Adele Jergens, Fay Wray, newcomer John Kerr (Minnelli originally wanted James Dean for the role) and Susan Strasberg inhabit this tony asylum –  the real one and the elegant homes and beatnik apartments – housed by the clinic workers and their wives. It’s fitting then, that the movie opens with the young, troubled artist, Stevie (Kerr) running down a road, only to be picked up by a doctor’s wife, Karen (Grahame), the neglected, kittenish and often angry stunner married to Widmark’s Dr. Stewart McIver. Their discussion? Color: Stevie says: “Red and green… Derain died last fall in a hospital. You wouldn’t know who he was …  He died in a hospital in a white bed, in a white room – doctors in white standing around – the last thing he said was ‘Some red, show me some red. Before dying I want to see some red and some green.’”

We get to the drapes before Karen even drops off Stevie – their ride to the clinic intercuts with Stewart discussing the new drapes with the dour, by-the-book clinic administrator, Victoria Inch (Gish), who is cheap, and sees no reason to be the least bit extravagant about curtains. Karen later notices the swatches and without telling her husband orders up the new drapes herself – and much more colorful and expensive drapes, to the later horror of Victoria. Karen’s action becomes a bigger problem when Stewart agrees with his patients and the clinic’s beautiful, slightly bohemian crafts director Meg Faverson (Bacall). Stewart and Meg are for the patients designing the drapes – chiefly Stevie. They think this is great therapy, something that will make the patients feel happier and satisfied and useful. But oh my god… the drapes. So much drama in the drapes. More time spent with Meg makes Stewart start falling for her, and less time with Karen makes Karen start unraveling even faster. The carousing medical director Douglas Devanal (Boyer) coming on to her after she strategizes with him and opens up about her marriage, doesn’t help. And it just goes on and on in circles – arguing about the drapes – until Karen becomes furiously proactive and drives to the clinic, hanging those drapes up herself. We should be proud of Karen at that moment, even if it’s destructive. My god, someone did something about the drapes!

We observe the patients, the so-called mad ones, and we see them lose it a few times, chiefly Strasberg’s agoraphobic Sue, and of course Stevie – once the new drapes are put up, he runs again, suspected dead. There’s also the acerbic Levant taking hydrotherapy baths and uttering darkly amusing, disturbing observations (some based on his own psychiatric problems – the movie was adapted by John Paxton from the 1954 novel by William Gibson). But the non-patients are the ones going crazy in The Cobweb and madness seems inescapable – nothing can seemingly contain it – certainly not those goddamn drapes. Grahame (who gives the picture’s best performance – pouty, insolent and vulnerable) talking in a phone booth to a grim Victoria during a symphony is so unusually dynamic, you can truly feel how “sultry” the air is, as Karen explains in the overheated booth. And they’re talking about … well, what do you think they’re talking about? The small, stuffy phone booth is an apt place to be arguing about drapes – these are characters contained in their marriages, their rigidity, their guilt, their losses, their need for expression, and all feel, to varying degrees, on the verge of exploding, of running, whether out of something or back into their own torment.

There’s hints of Charlotte Perkins Gilman’s “The Yellow Wallpaper” here (“It is the strangest yellow, that wallpaper! It makes me think of all the yellow things I ever saw-not beautiful ones like buttercups but old foul, bad yellow things.”) though Minnelli’s characters are stuck in an unstable rest cure in their own minds, with drapes and bright flowers and Gloria Grahame’s red lipstick, which at times looks almost running from the corner of her mouth – she always seems just a little mussed, not matter how beautifully dressed. Mussed seems appropriate as Minnelli cracks his characters over the head with the drapes and he never let’s go of those swatches for a second. Stewart says, “Before we know it, we’ll have so many drapes around here we’ll wrap the clinic up in them.” He’s almost right. By the end, someone will be wrapped in those drapes. Literally. For comfort. For calm. Watching Karen wrap Stevie up in the dreaded drapes like a blanket – oh, god – it’s not so calm. And, yet, the drapes have served some kind of utilitarian purpose. Which, seems at this point, well, insane.