Home Archives Profile Subscribe
Kill Or Be Killed: Fallen Angel
Kill or Be Killed: He Ran All the Way 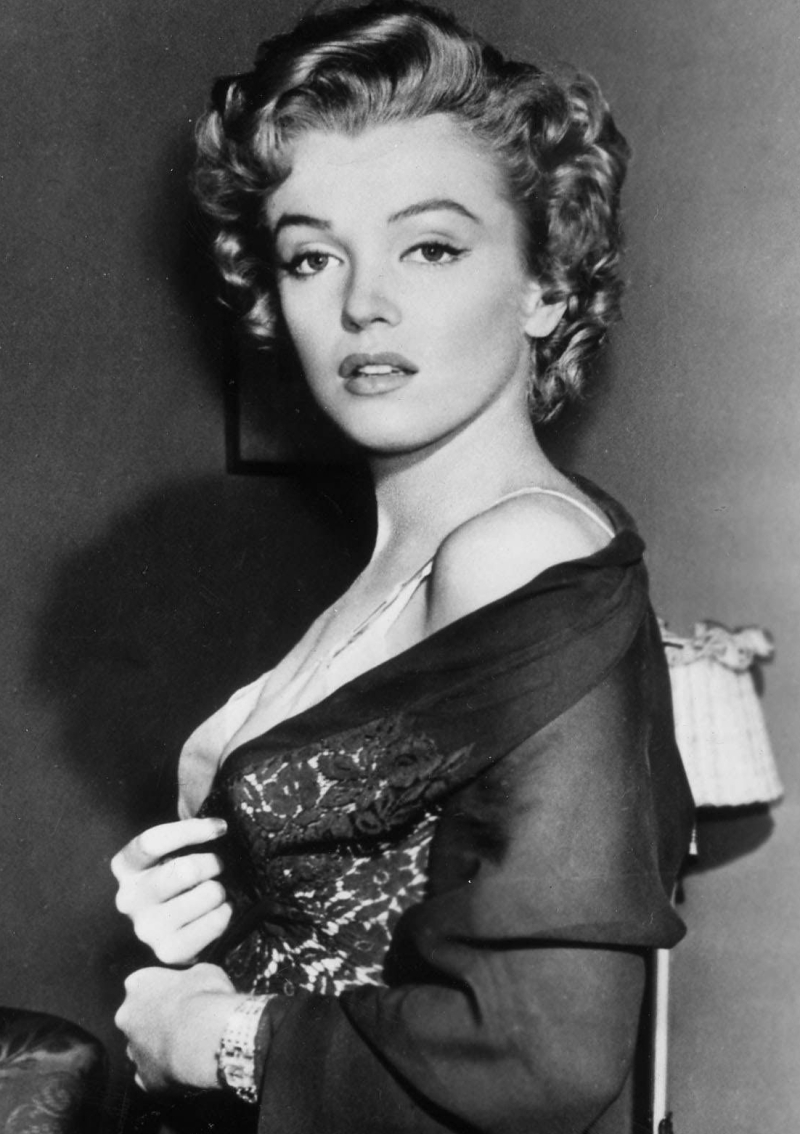 “There was just this scene of one woman seeing another who was helpless and in pain. It was so real, I responded. I really reacted to her. She moved me so that tears came into my eyes. Believe me, such moments happened rarely, if ever again, in the early things I was doing out there.” – Anne Bancroft on Marilyn Monroe 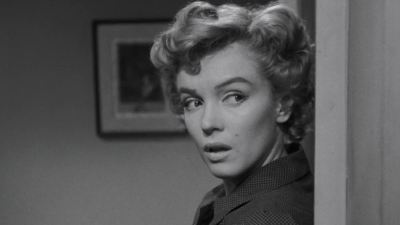 The moment Marilyn Monroe walks into the hotel of Don’t Bother to Knock – we are enthralled. It’s her first scene in the movie and without knowing anything about her beautiful, troubled Nell, and what her beautiful, troubled Nell has been through, we feel a pall hanging over this young woman. Monroe, on sight, is that powerful. Monroe’s tentative gait and unsure eyes enter the space (its own kind of asylum) where the lounge singer, Lyn Lesley (a grounded, lovely Anne Bancroft) sings swoony tunes in a cowboy themed room. It’s an intriguing juxtaposition – a nervous 1952 Marilyn (ten years before her death) – less made up, darker blonde hair, simple dress – passes the poster of glamorous Bancroft – not knowing she’ll be in a room with that woman’s soon-to-be ex, cocky pilot, Jed (Richard Widmark). That’s not so surprising – a seduction with Widmark. This is Marilyn Monroe after all, and even clad in simple frock and sad expression, she’s stunning to behold. But what feels unexpected is that the most understanding characters, the ones who will really sit down with this poor young woman and approach her with kindness, will be that hotel chanteuse and that cocky pilot. There’s no irredeemable cad in this picture and there’s no femme fatale either – even if the movie’s poster blared: “A wicked sensation as the lonely girl in Room 809!” 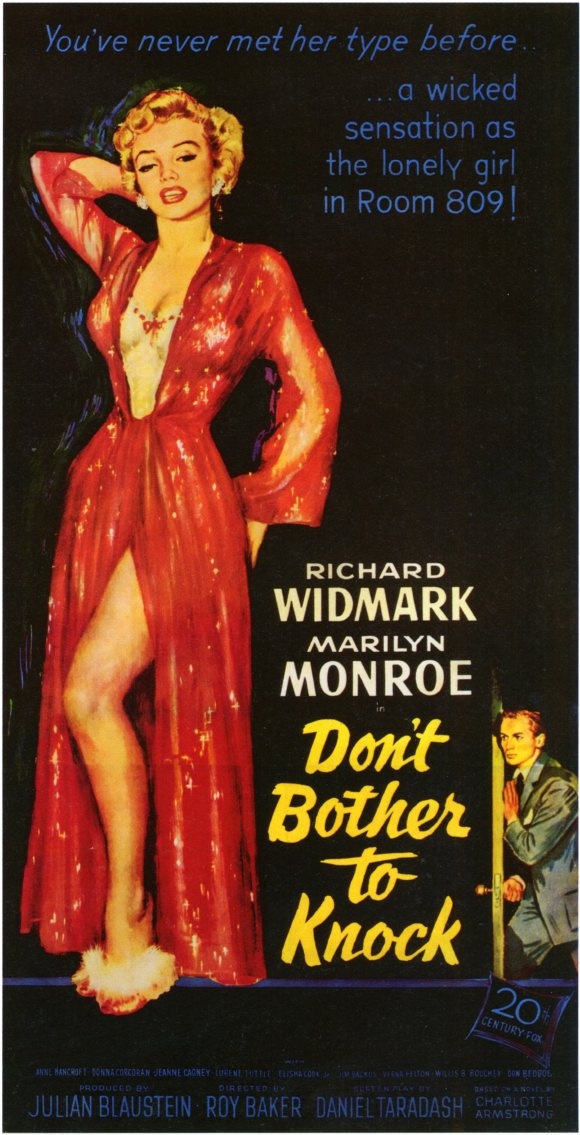 The scene continues and we’re further drawn to Nell. She walks up to a man she knows –  the elevator operator (Elijah Cook Jr.) – and she smiles. It feels disarming to us, and it surprises him, possibly angers him: “What’s the smile about?” He asks. “You seem so different in those clothes,” she answers with a curious mixture of eager happiness, even some relief. It’s a nice comment that is met with the slightly defensive: “I’m different all the time.” Immediately I’m thinking – let her say something nice, jeez. And then I think, he’s probably right – that he is different all of the time – and not in a good way. Cook Jr. excels at being so simultaneously wormy and woeful that right away you feel … she ought not be around this guy. Later you’ll learn he is indeed, not so nice to her, even as he’s supposedly doing her a solid. We don’t know how to feel about him.You see, not long ago, she was released from an insane asylum in Oregon, and she’s come to stay with him, her Uncle, in New York City. He’s gotten her a gig to babysit the child of some swanky hotel guests that night and she wonders if she’s ready for it. He thinks she’s getting better. He should have listened to her hesitation.

Nell reads to her little charge and then quickly puts the girl to bed. She eats the chocolates she turned down originally (a wonderful little moment) and walks through the suite, performing a beautiful, silent scene lasting two minutes where Monroe’s expressions, body language, how she reacts to objects, everything, comment on both her hope and her turmoil. Nell turns the dial on the radio (in a lovely, lingering touch, Lyn’s songs are piped into the rooms – Jed cannot escape her), then clicks off the radio, almost annoyed. She is drawn to the vanity table and puts on the mother’s perfume and diamond jewelry. There is something so touching and intoxicating about Marilyn placing those earrings next to her face – Norma Jeane to Marilyn – her skin lights up. And then she hears an airplane and everything darkens. She becomes haunted, her worried eyes moving towards the sound, her body twisting towards the window. It’s mysterious, but telling; it’s filling in details and nuanced. Nothing about this is easy, acting wise, and Marilyn makes it look effortless. 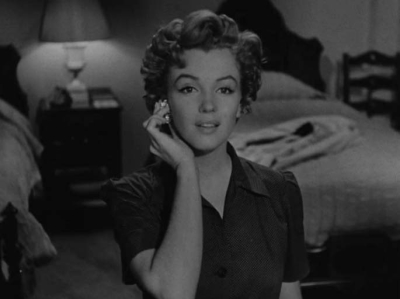 Director Roy Ward Baker shot on a short schedule, in sequence and reportedly printed the first takes. If true, she is all the more impressive. (As much as I revere The Misfits and Marilyn in it, I have seen interviews with Arthur Miller in which he says The Misfits was her first real dramatic role and I never understand what  he is saying -- Don't Bother to Knock was certainly a dramatic role. As were Niagara and Bus Stop and River of No Return, and there's drama and pathos in her comedic roles, as well as her smaller parts in pictures like Clash By Night and The Asphalt Jungle.)

In another room, there is the man who will take all of her in – Jed – restless and stinging after Lyn has dumped him for being, well, a cad. “You lack an understanding heart,” Lyn opines. In an incredibly erotic flirtation, he spies Nell from his window to hers (the use of space in this picture is wonderfully utilized –black and white cinematography by Lucien Ballard) and when lonely Nell signals him from her room, he comes over for a good time. He puts up with her odd behavior until it gets a little too much. Widmark is fantastic here – he moves from sexy to smug to sympathetic and we never doubt it. He’s turned on and then he’s concerned and then he just wants to get out. But he can’t shake how sad this woman is. When she comes on strong, something most men would dream of, he exclaims, confused and annoyed: "You bother me! I can't figure you out! You're silk on one side and sandpaper on the other!" MM answers, tragic: "I'll be whatever you want me to be!" He asks the sensible, perplexed question: "Why?" 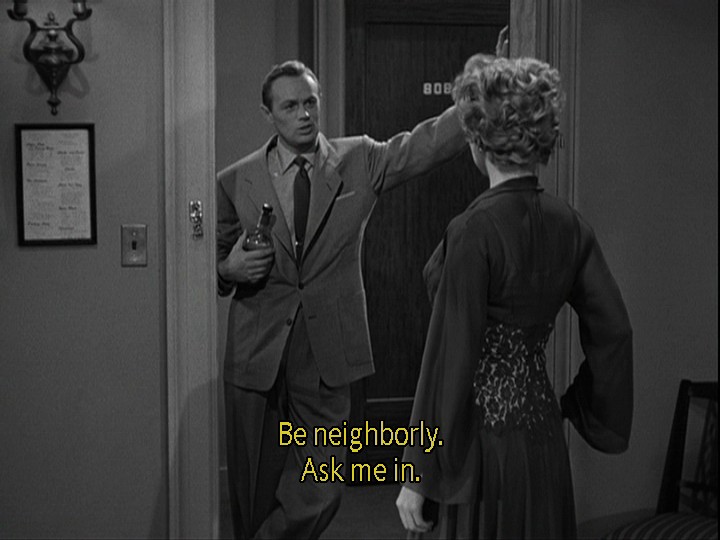 Well… she has cracked, that’s why. But not because she’s wicked. Her husband died and she remains debilitated by a deep mourning that fogs her mind into thinking Widmark is her dead love. She wants to resurrect caring, protection, escape. Her life was hard. Her parents whipped her. She’s attempted suicide. And who knows what is happening with that Uncle. She’s holding on and protecting herself. She’s vulnerable while deep rage pours out of her. That death and that abuse makes her cling to Jed and terrify the child (she ties her up so she’ll be quiet, and in another scene, you get the sense she might push her out of a window), and Marilyn showcases this with such raw intensity, such honesty, that she is genuinely disturbing. We are truly concerned for her. But Nell doesn't really mean any harm – and Jed doesn’t think so either. She needs help, and, perhaps, she yearns to be herself, to be appreciated, and to be appreciated for not being what everyone wants her to be. Normal. What does that mean? 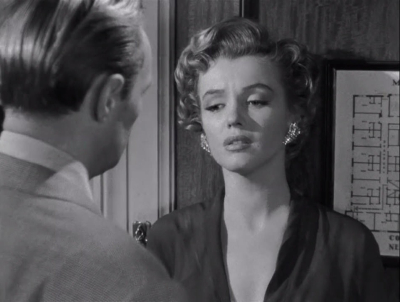 There’s such a prophetic sadness to Monroe’s complex performance, and knowing all we do (or think we know– there are so many books – MM manages to be ubiquitous and mysterious at the same time), it most likely wasn't a stretch for young Marilyn to understand the pathology and despondency of her character. As Donald Spoto wrote: “Marilyn made of Nell not a stereotypical madwoman but the recognizable casualty of a wider urban madness… As she said her lines that winter … she may well have thought of her own girlhood; when she spoke of the character’s loneliness in an Oregon asylum, the memory of her Portland visit with Gladys [her mother] may have come to mind.”

It’s a heartbreaking portrait, and a movie that sympathizes with Nell, but the moral of the story comes somewhat at Nell's expense – Widmark’s Jed becomes the decent man for not giving into temptation with the damaged woman. He finally shows an “understanding heart.” It’s almost heroic because, in real life, many men wouldn't be sensitive enough to resist. And you know that Nell will learn that soon enough. Likely, she already has. 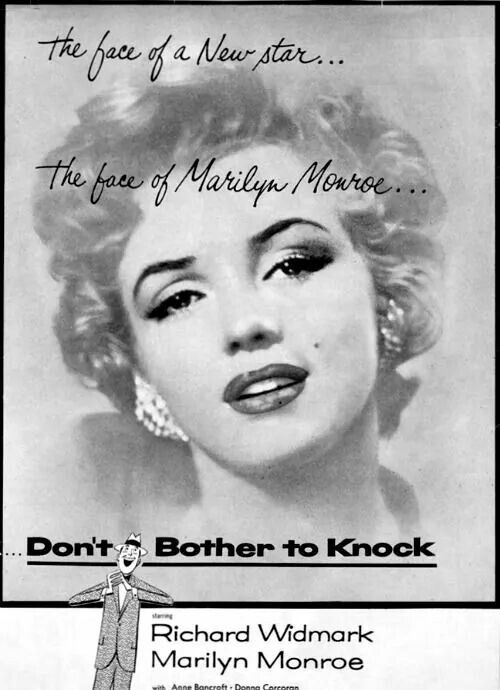 I absolutely,totally agree with you in your wonderful critique of Marilyn's dramatic abilities. Her mesmerizing dramatic performance in "Don't Bother to Knock" is sadly overlooked. Fifty years later, it remains powerful. I also really enjoyed her work in "Niagara", "River of No Return", and my personal favorite of her dramatic roles, "Bus Stop". In addition, most people fail to realize how difficult it is to also do successful, perfect comedy performances, such as her role in "Some Like it Hot". Her timing was excellent, and she lit up the screen, not as Marilyn Monroe, but as the character-Sugar. Some say that the persona and character of Marilyn Monroe was her greatest, and most brilliant, performance.