Elaine May and Mikey and Nicky

A shorter riff on this movie...

At the beginning of Elaine May’s Mikey and Nicky, John Cassavetes’ Nicky is holed up in a seedy motel room in Philadelphia, terrified and desperate. He’s in the midst of a nervous breakdown and looks like he’s been up for days with his messy, bed-head hair, handsome, haggard face and wrinkled white dress shirt sticking to his thin frame in an angst-filled, ulcer-ridden sweat. He’s stooped on a dingy bed and staring nervously rat-eyed at the dirty, chain-locked door, hoping no one busts through. He’s got a gun. Of course he’s got a gun. This place is the kind of fleabag hovel where people shoot through filthy locked doors or bribe front desk clerks who’ll look the other way when an offender blasts through those grungy openings and commit whatever bit of unpleasantness that happens on the other side. The joint is haunted with the lives of those who hide in the rooms, sitting on bed-bugged blankets full of dope, hope and desperate dreams. Nicky isn’t dreaming, his life is a wide-awake-nightmare. But he does have hope – he hopes to stay alive.

He's got a good reason to be scared – he’s heard there's a contract out on him. He calls the buddy he’s known since childhood, Mikey (Peter Falk) and begs for help. Nicky knows Mikey’s going to come up, even if Nicky throws down a towel and nearly knocks Mikey with a bottle. You feel for him. Mickey reassures him, spending the entire movie with his pal. Mikey’s an old friend and Nicky can trust him. Oh… hold on. Can he? Is he on the level? When you eventually learn that Mikey is not  on the level (and you don’t catch this right away), and once you realize that the hit man (played by Ned Beatty) on Nicky’s trail is being aided along by Mikey, you start to piece together that this friend isn’t the one Nicky should have called. You’re on Nicky’s side. You think. Keep watching. No, you’re on both of their sides because, what kind of hell are these men trapped within? What kind of life is this? Is Mikey really going to deceive Nicky? Is Nicky maybe a sociopath?

As the night wears on and these two talk, fight, hit each other and smack a troubled, sensitive woman, the friends reveal more and more about themselves and your emotions shift all over the place. Whatever alliances you had, whatever charm you’ve felt from these two guys, all that has been dragged around and sullied, dirtied up like that door in Nicky’s dumpy motel room. And May shoots it that way, never allowing a glamorous moment to enter the frame. You can practically smell the bars they’re drinking in. And yet, you don’t want to get out of this movie, you don’t want to unlock the door and make a run for it. You like being stuck with these two small-timers, you’re fascinated and drawn to them, and you wonder where this is all gonna end … who is going to make it through the night? 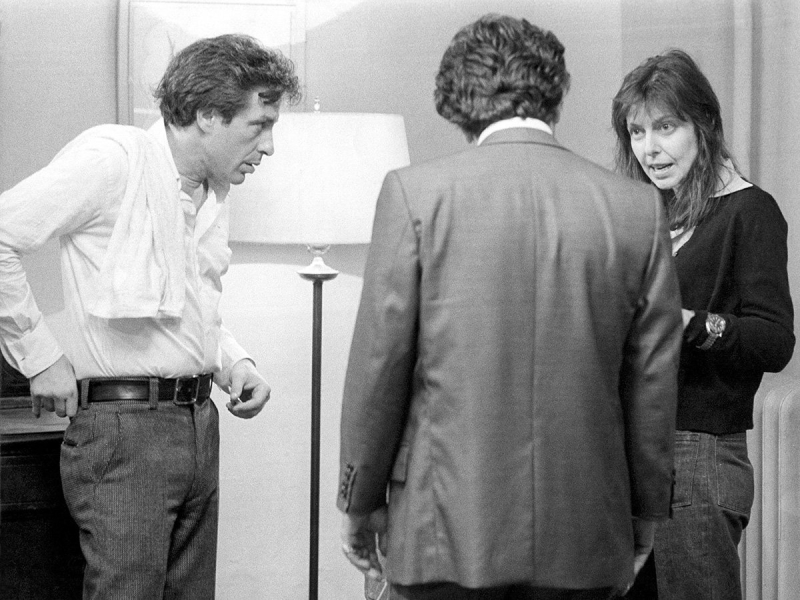 That is the genius of writer director May and her actor’s Cassavetes and Falk. In one night, in the ghostly urban environ of Philadelphia (a decidedly less romantic place than New York City or Chicago or Los Angeles, or at least May shoots it that way, haunting, at times oddly beautiful), we tag along with two scumbags who talk in junky beat-up bars and on city busses or in the streets and we are enlivened, anxious, depressed, disturbed and empathetic. By trusting the chemistry and brilliant interplay between Cassavetes and Falk, May not only shows her subjects as flawed, violent, vulnerable, selfish, guilt-ridden and manipulative men carrying around decades of resentment (as many friends do) but men who are constantly on the precipice of violence, emotion or literal, and violence ready to do them or someone else in. You feel jangly and uncomfortable watching these two – you are waiting for a shoe or two or three shoes to drop. Maybe on Falk’s head. 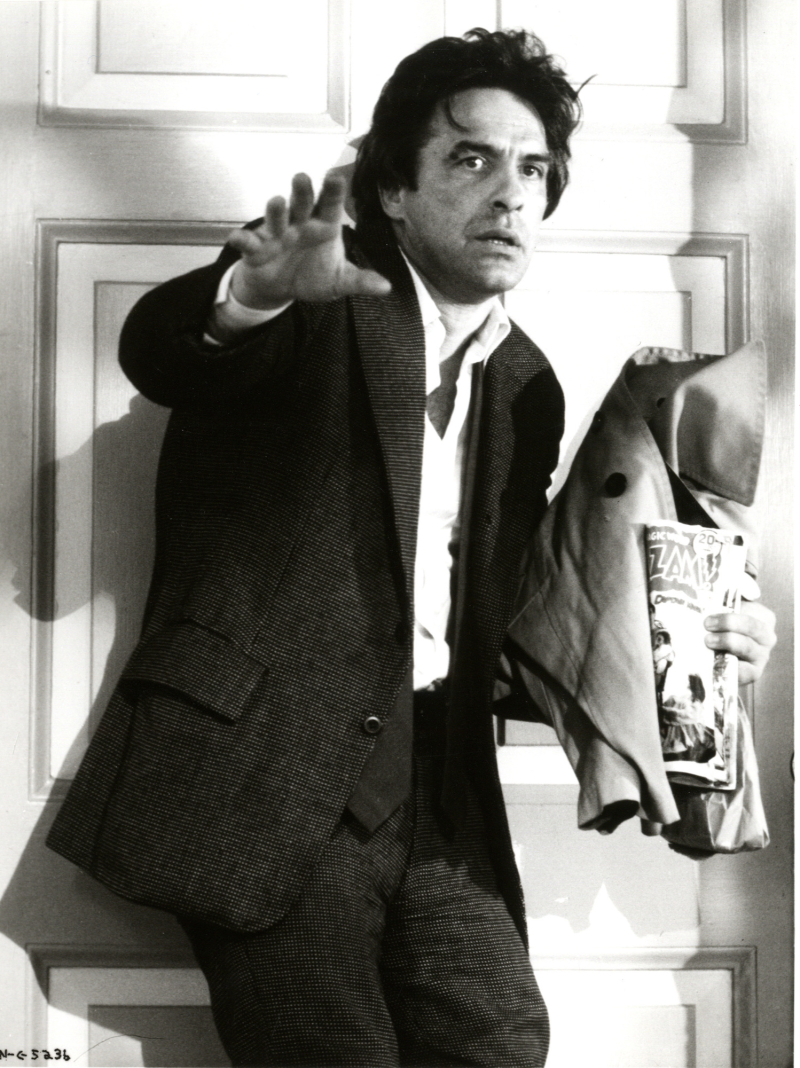 There’s nothing noble about these guys – when they stop off at Nicky’s mistresses apartment, Nicky spouts some hollow “I love you” line so he can nail her on the floor, while Mikey’s hunched over in her depressing kitchen, waiting for them to finish and for his turn. When Mikey’s rebuffed, he smacks her. Just as feel like Mikey’s a real son of a bitch, you feel sorry for him minutes later (in spite of yourself) when he accuses Nicky of setting the scene up to embarrass him, to hurt his male ego. But then you start to believe Mikey when he claims she’s just a psycho and needs to be coddled with sweet talk before the act, and then you realize you’re buying this atrocious behavior. God, you’re right there on the street with them. Nicky breaks Mikey’s watch – his father’s watch, something that holds sentimental value. What an asshole, you think. But they’re both assholes. You want to keep on with them regardless. They’re so compelling that they make unlikable characters not, lovable, but magnetic and, at times, totally recognizable. It’s what people call a “high wire act” and the artists walk it bravely. Too bad some critics in 1976 didn’t think much of this movie ( not all of course) - a movie that now stands as one of the most underrated works of the 1970s. What were they thinking? 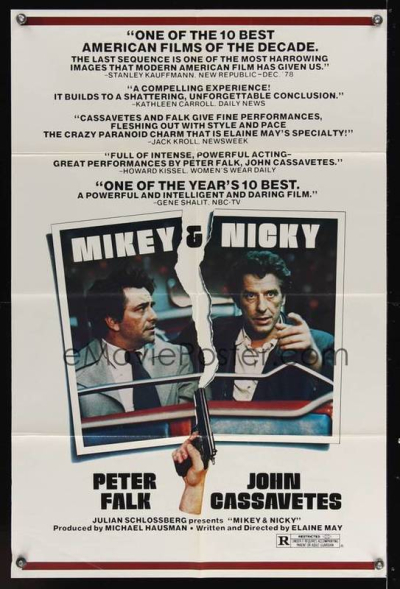 This was considered, by some, a darker turn for May, who had directed the brilliant comedies A New Leaf (which she wrote) and The Heartbreak Kid (written by Neil Simon) prior to this, though it’s not like those two films were light comedies. The Heartbreak Kid is as bleak as anything in Mikey and Nicky (maybe even bleaker) but we don’t get to see the sunny beauty of Cybill Shepherd running around in a bathing suit to quell any of the acidity (though her brittle beauty is the catalyst towards selfish, terrible Charles Grodin marital doom). Instead we see the perpetually ruffled and combative Cassavetes’ protagonists (and of course May was compared to Cassavetes’ own films – Husbands being a chief picture) skulking around in a paranoiac frenzy. And she captured their movements, their words, their chemistry, creating a world that feels empty (the streets) and full all at once. Full of fear, full of possible love that probably won't happen. Full of deceit. What she does with the darkness, the bars, the hotel rooms and the talk -- it's all perfectly realized -- and she keeps you off kilter in a way where you can't take your eyes away from these two supposed low-lifes.

She shot a lot on this one. The movie carries a notorious production history (it’s been talked about retrospectively enough, but May notoriously went over budget, reportedly shot more film than Gone with the Wind and, at one point, reportedly hid reels somewhere in Connecticut). She didn’t direct another film until her vastly underrated, excellent Ishtar came out eleven years later. Well, that’s a shame.

Mikey and Nicky is also funny, grooving on the darkly comedic and very human rhythms of Cassavetes and Falk through which even their explosions of violence play as darkly humorous, at least for a moment, until you’re taken aback and saddened by the needlessness of it all. It’s painful and poignant and challenging and funny and finally, heartbreaking. The picture ends as you might expect it to and yet, it feels totally surprising, this rush of emotion you feel as Nicky bangs on Mikey’s much nicer door, nicer than the one in his crappy motel room. He’s yelling in misery: “Mikey, you son of a bitch! You bastard! You bastard! Mikey!” His life is nearly over and damn, you really feel it. You believe it. You believe every second of this movie. A line uttered earlier by Mikey is now, not so much funny as more awfully prophetic, circling back to desperate Nicky screaming at his door: “It’s very hard to talk to a dead person. I have nothing in common.” Maybe Mikey’s telling himself that at this anguished moment. Maybe not.

Originally published in Kill Or Be Killed