Home Archives Profile Subscribe
Kill Or Be Killed: The Hitch-Hiker
Questions Arose: His Kind of Woman

A Rose and Her Thorn: Rabid 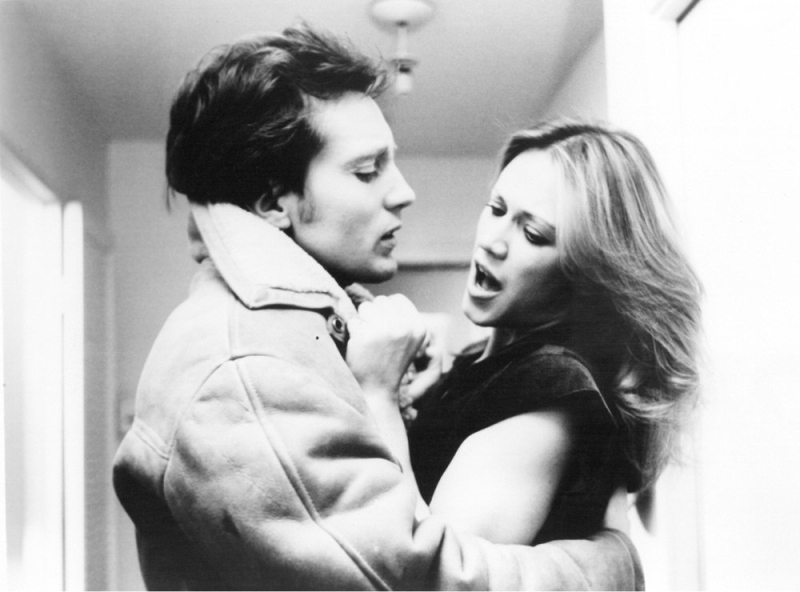 From my piece published at the New Beverly.

“One is not totally in control of making one’s metaphor when making a movie. You find that it seems right, and you’re not necessarily able to articulate why it is right. Certainly the premise of Rabid is outrageous on a certain level… Now, there was a time when I was making this movie where I said to my producers, ‘This makes no sense at all. This cannot work …’  He convinced me. He said, ‘No, it’s really got something. The imagery is really powerful and it will work….’ What people saw it as was a kind of metaphor for AIDS, later on, or for the spreading of various viruses, whether they were talking about the spreading of the virus of Cronenberg filmmaking, I’m not sure, maybe somebody’s going to propose that. But in terms of your own personal interpretation and whether or not the film strikes you as scary or ridiculous, well, I’ll leave it up to you.” – David Cronenberg 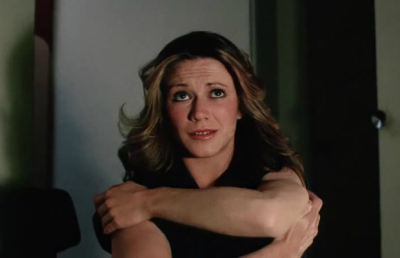 There’s a scene near the end of David Cronenberg’s Rabid in which beautiful, rabid Rose is revealed to her boyfriend, Hart. She’s just sucked the blood from her best friend who will join the epidemic of foaming-mouth zombies, suffering a new strain of rabies that is engulfing Montreal in panic and destruction. Hart’s been searching for his love – poor injured Rose (he crashed his motorcycle with her riding on back, nearly killing her) – after she’s had emergency skin grafting surgery to save her life. She’s stuck in an institute of rich plastic surgery patients, one man is snootily revolted that her bloodied body is brought in for others to witness (ugh!), but her life is saved.

But she takes off – mayhem has ensued. 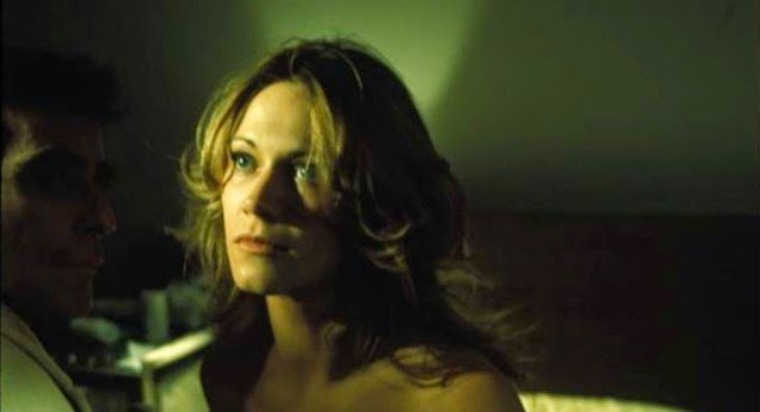 What on earth is going on? Well, then Hart sees her – on the floor of her friend’s apartment, Rose’s sharp, recently acquired phallus retracting back into the vaginal orifice that has manifested from her armpit after experimental surgery – surgery she didn’t ask for. And from that plastic surgery center –  it was the closest place to tend to her. Rose was not getting work done (I feel I must point that out because we know how those stories can spin, and I feel protective of Rose). Something about this injured girl next door entering this center feels both comic and exceedingly sad. They didn’t mess with her face, but we know this new, powerful mutation is present – we’ve been following Rose throughout this ordeal – and we are fascinated. Her mixture of terror, warmth and sexual intensity is alarming and, at times, heartbreaking. She’s strong and vulnerable and she can’t seem to reconcile the two – never mind the new power that’s unleashed. We see the men look at her and wonder what she wonders. But we also understand. She has a strange, startling power and she uses it. Repressed down, under that pretty face and welcoming smile, she’s most likely deeply angry. She also feels guilty about being so angry. 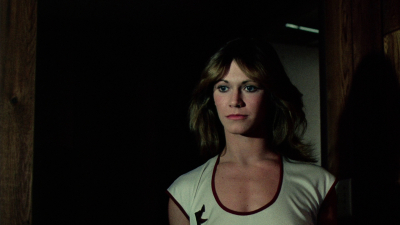 So, when Hart sees what she’s done to her friend, she looks at Hart with a penetrating mixture of deep shame and desperate self-defense. “It’s not my fault,” she nearly whispers as he stares at her in shock. Montreal, now descending into a terrifying virus, a madness, citizens infected with a zombie disease that will probably spread throughout the world, Hart figures out it was she who started it and turns on her. (Shades of the woman in the diner in Alfred Hitchcock’s The Birds – screaming at Melanie Daniels: “I think you’re evil! Evil!”) He states: “It’s you. It’s been you all along.” She asks, anxiously, “What are you talking about?” He becomes irate: “You carry the plague! You’ve killed hundreds of people!” 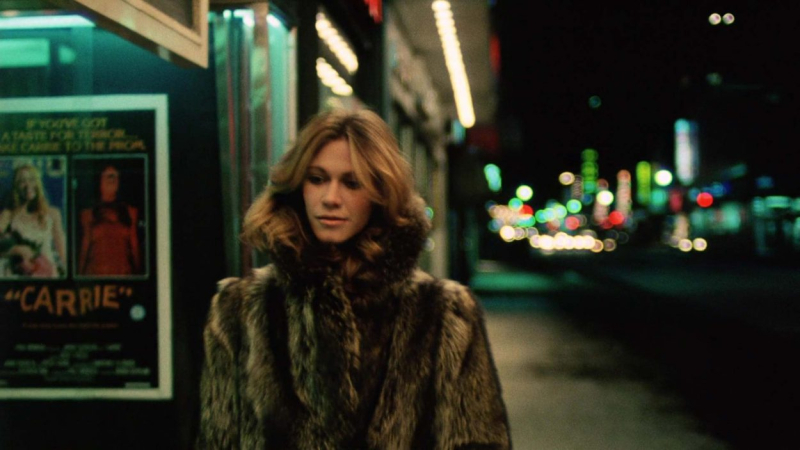 This is when my heart sinks for poor Rose (played by a liltingly affecting, at times poetic Marilyn Chambers) and I think David Cronenberg’s does as well. When she protests with such sadness: “I’m still me! I’m still Rose!” I think, oh, Rose, you are still you! With the same heart, the need for warmth, and your completely understandable fear and rage that many of us (particularly women) understand. When Rose cries to her doctor in an earlier scene, wailing, “I’m hideous, doctor! I’m crazy and I’m a monster!” we feel her anguish and self- loathing – that terror of destruction, that people hate you and that you deserve it (even when she doesn’t). It’s all played out with such primal urgency and it’s hard to articulate because Rabid is not a morality tale, it feels more like a dark fairy tale. Even her name – Rose – conjuring up duality is reminiscent of sleeping princesses and Anne Sexton poems. It opens so idyllically – Rose goes for a romantic motorcycle ride, two lovely people in love in leather on a nice day, and then …  she wakes up “hideous.” And after doing so, having no control over a narrative that will turn her into an Eve, a Lilith, a vampire and a woman with both a vagina and a sharp, scary dick – something a man cannot compete with. Hart yells: “You’re not Rose!"

Throughout its running time, Rabid works on such a primitive and lyrically allegorical level that we move along with it – curious and horrified and titillated to see where it will go. It’s funny and sad and absurd and a little bit of a turn on, too –  which seems strange. But maybe not. Cronenberg does not judge. 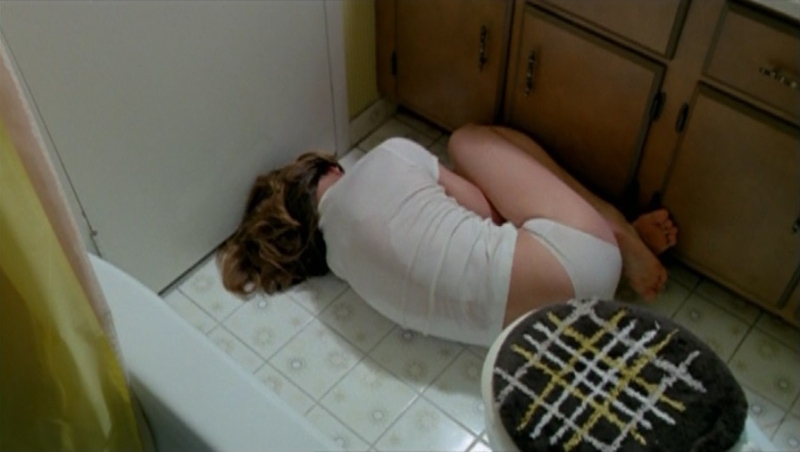 But, back to this moment with Hart (played by the uniquely pretty, almost feminine Frank Moore), at this moment, the movie shifts into a penetratingly potent metaphor of blame, of guilt, of anger, of disgust. A lover’s quarrel filled with the internalized hatred of the body. And this is something women often feel – they sometimes feel disgusting and worry about it – and in particular, they (we) feel disgusting to men. We have stomachs that swell with water retention and we curl on bathroom floors with cramps painful enough to make us vomit. We have fibroids. We have cysts. We have cysts with hair and bones and teeth. We have blood coming out of our  …“wherever.” It’s nature, it’s unfair anyone would judge or not trust a woman for bleeding but the idea that bleeding is weakness persists. As Rose declares that she needs blood to subsist, it’s upsetting and she’s scared, but it’s strong too. Blood is a source of strength. And also, anger. Rose then screams: “It’s YOUR FAULT!" 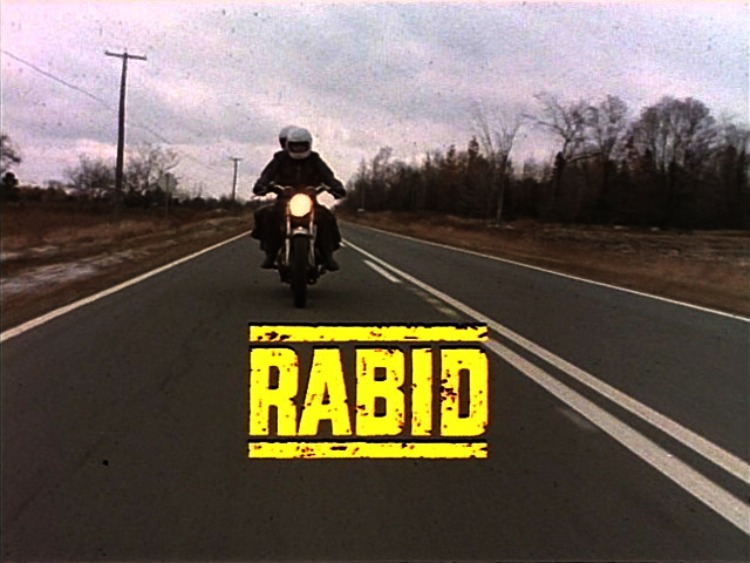 When I first saw this movie, I thought she might kill Hart, perhaps accidentally. I thought he wouldn’t understand her, or at least not even try. (No one really understands each other here, and that’s another intriguing aspect to Rabid) But in a beautifully tender moment, Hart turns off the anger and feels awful for her. He did get into that crash on the motorcycle and he did harm her. But it’s not his fault either. Really, nothing is anyone’s fault in Rabid, one of the reasons Cronenberg is always so complex. His films are often so emotionally messy, and bodily messy, tapping into very recognizable and mythic feelings of repression, of a loss of control, of psycho sexual urges, of mutations, of agency … positive and negative. In many of Cronenberg’s films, there is blood coming from the … wherever (see The Brood). And he’s comfortable with it, fascinated by the duality of women. But he knows others are not, or at least scared of women, which makes Rose’s boyfriend a kind soul: “There’s got to be a way we can fix this,” he says, attempting to soothe her. How moving. He’s walked in on his bloodsucking vaginal phallus girlfriend (!) and eventually sees her as Rose again. But there’s no way to fix it and she screams and runs and he falls down the stairs. She does not penetrate him for his blood, because she, I presume, loves him. She’ll make the sacrifice by the end. It’s terribly sad. 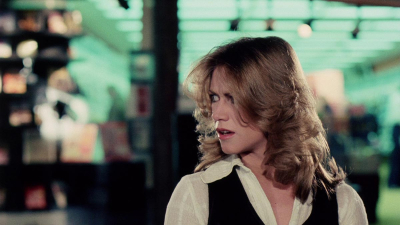 It seems odd to say that Rabid is a beautiful film, but in so many ways, it is. From the shots of Chambers in her fur coat, walking the streets at night, to her scurrying through the countryside, from even her bizarre orifice, it’s filled with haunting imagery. There are theories one can ascribe to it, some morbidly funny, some political, some virus-related, but, to me, it rolls along to its own rhythm, with you to make of it what you will – Cronenberg’s as messy as a period and as unexpected as a hormonal surge.

I love a scene in which Rose sucks the blood from a cow. It’s the most gorgeously fairy tale sequence in the movie, beautifully shot in the darkly blue-tinted sky as she walks along on a rainy night. She arrives at a farmhouse and like a sweet princess, is attracted to the warmth and fur of the cow (lying down). She tenderly pets the creature, projecting a multitude of emotions – kindness, innocence, a need to touch, to feel this breathing creature, she then feeds on the cow’s blood. And then she vomits. When the farmer catches her, he does what many men want to do to her – fuck her – and so she feeds on his blood. I suppose we’re to root for her here but I really wish she could have napped, silently, for just a little while, with that cow. Poor Rose. 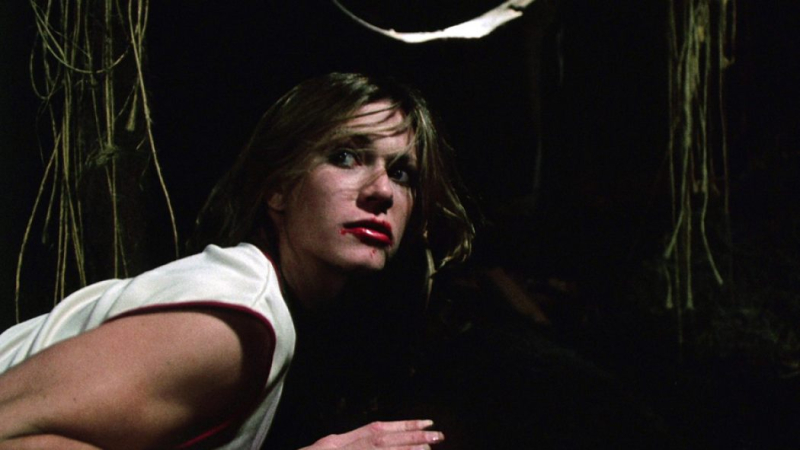 Thinking of Rose, and the poignancy of Chambers’ performance, I thought of some obvious analogies – of Ann Brontë writing, “But he that dares not grasp the thorn, should never crave the rose.” At the end of Rabid I recalled “Mrs Dalloway” by Virginia Woolf: “’Roses, she thought sardonically, All trash, m’dear.’” Rose is not that, of course, but she knows no one will ever see her the same and is terrified by what Hart has told her.  And so she locks herself in a room with an infected man and waits… It’s a test, but she essentially allows herself to die. And, literally, at the end, she is dumped in the trash as an anonymous Rose, workers ditching her body unaware she could be the cure. Not all, trash m’dear.