Home Archives Profile Subscribe
Kill Or Be Killed 13: Joseph Losey's M
Her Shadow Between Us: Rebecca

The Artistry of a Nightmare: Tobe Hooper's The Texas Chainsaw Massacre 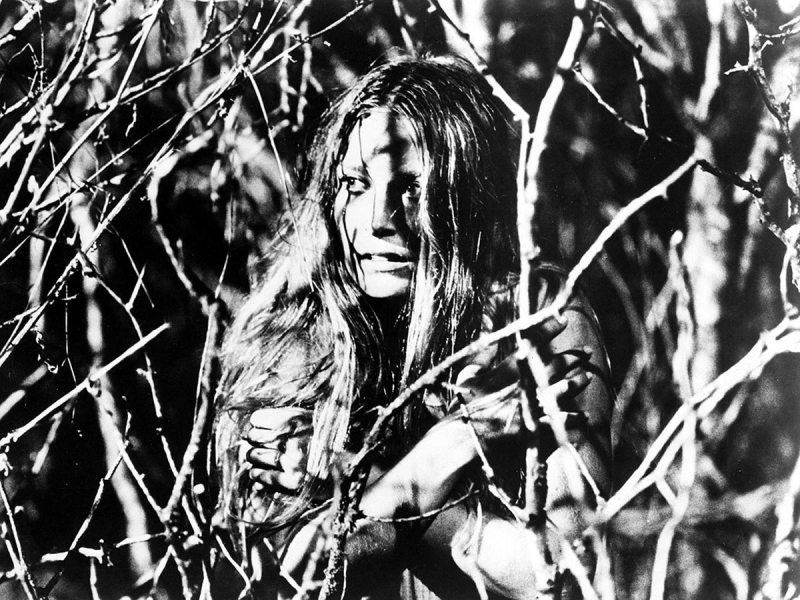 Happy Halloween! From my piece at the New Beverly

“The film which you are about to see is an account of the tragedy which befell a group of five youths, in particular Sally Hardesty and her invalid brother, Franklin. It is all the more tragic in that they were young. But, had they lived very, very long lives, they could not have expected nor would they have wished to see as much of the mad and macabre as they were to see that day. For them, an idyllic summer afternoon drive became a nightmare. The events of that day were to lead to the discovery of one of the most bizarre crimes in the annals of American history, The Texas Chain Saw Massacre.” 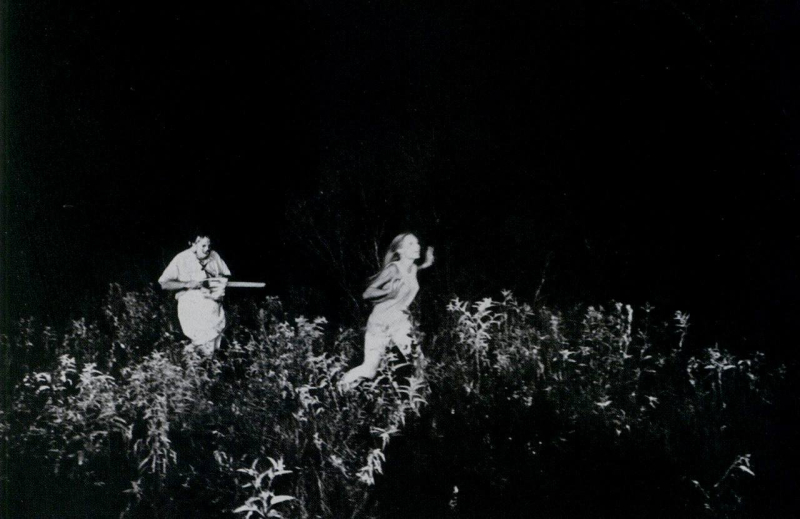 Sally running in the night. She is screaming and running, her white pants and long, golden hair gleaming in a darkness lit only by the moon. We’re watching her as she keeps running and running and running and screaming and screaming and screaming as a large man pursues, close behind. He’s wearing a skin mask and wielding a chainsaw that seems extra loud and extra horrifying – the ghastly saw sound that’s transformed from the regular use of limbing and bucking and felling trees, and is now a tool for cutting through skin and bone. Sally has witnessed just that – the cutting through skin and bone – from the hands and instrument of this terrifying creature/person/animal/thing chasing behind when her complaining wheelchair-bound brother, Franklin, was sliced right in front of her eyes. This thing, whom we will later learn is named “Leatherface” is, in fact, a human being, which is somehow scarier than any kind of mythological monster chasing poor Sally. And he chases and chases and chases – he is seemingly never going to stop. His bloodthirsty need to cut and kill is amped up and swelled with sick adrenaline just as her fight or flight mechanism has kicked in to ultimate breathless survival. She could win a triathlon with this kind of endurance, and she runs and dodges and cuts through brush and bramble with her legs and arms and face, not concerned with being scraped by the nature around her. 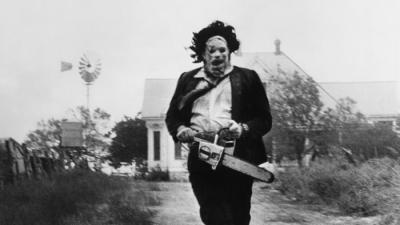 There is something seemingly unnatural (though entirely comprised of skin and meat and flesh, save for the chainsaw) close behind, and the outside night and landscape envelope around her. It’s both claustrophobic and agoraphobic. When there is everywhere to run, where is there to hide? Even the dark night can’t obscure heart-breaking Sally, she’s almost shining in it, and her fear is so visceral and real and such a wide-awake nightmare, that your thoughts race with her thoughts. You even feel her vision, focusing your gaze ahead along with her as she hopes and screamingly prays to run towards any kind of safety – a house, a person, a car, anything – her running echoing the inner hell of a level-ten panic attack blurring your side vision, but fixing on what is in front of you. She can’t see what’s in front of her except desperate possible freedom, and then she spies that house and clamors her way in. But that’s no freedom – there’s a half alive old man and a Mrs. Bates-like corpse sitting next to him – and she’ll jump through a window and resume back to the running and screaming and running and screaming through brush and bramble and on to another “safety” that isn’t a safety at all.

No safety. Ever. You are not passive as you are watching this. And no matter how many times you take in this long sequence (or, rather, I – I will speak for myself, I can’t account for others, though I sense many would agree), you never feel unaffected by this dreadful pursuit. Relentless isn’t an adequate word to describe this sequence; there should be another term for it, something mirroring the trauma we can feel in our bones. It’s true. We can almost smell her fear, we can feel Leatherface’s breath, his blade, even his hands that aren’t even free, he’s holding a chainsaw, and we sense him grabbing her hair (even if he doesn’t) as it flies behind Sally like a long, dreadful scarf. 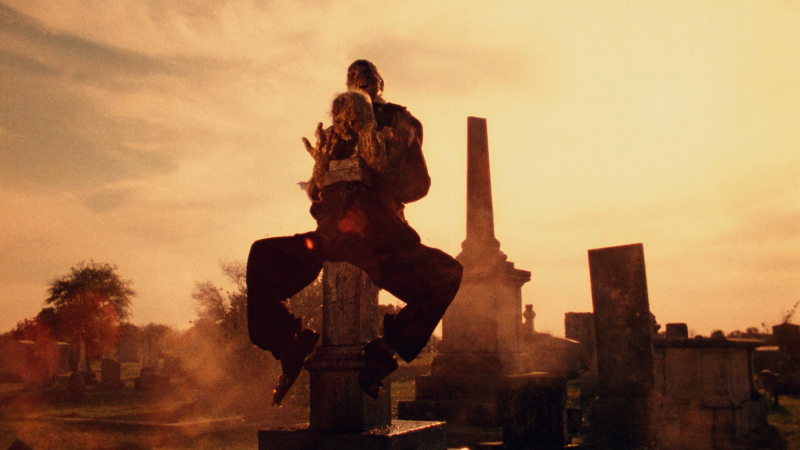 That vicious, unforgettable pursuit from the late, great Tobe Hooper’s landmark masterpiece, The Texas Chain Saw Massacre, so powerfully acted by Marilyn Burns and Gunnar Hansen (and by the entire cast throughout the movie), is both horrifying and distressingly emotional. It is also strangely beautiful in its nightmare vision, real and unreal – you are down on the ground with the trauma, running alongside it – and you can’t process any of this until later, when the images float in your head, usually at night when you are attempting to sleep. (Dear lord, these kinds of things can happen.How close have I been to a family of lunatics?) Hooper’s low budget work of incredible ingenuity is filled with beautiful craft and stunning visions that never take cues from a standard playbook of horror – they appear and sound and move to the poetry of a director (and editors, J. Larry Caroll and Sallye Richardson, and cinematographer, Daniel Pearl) who is considering the stench and the heat as well as the skin and the bones and the muddy mental tones, both terrifying and comic – sometimes all at once. And then there’s that scary idea that things seemingly solid and All-American – family and meat – have twisted and rotted to the point of gleeful sociopathy. 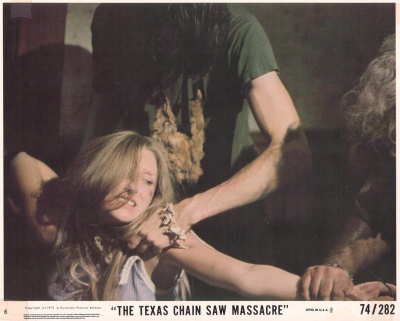 Certainly, this has been expressed or known before (nowhere is ever innocent), but there is a special quality to The Texas Chainsaw Massacre that feels like an assault, and certainly at the time, like nothing anyone had ever seen. You practically feel the movie spilling out of Hooper’s head, as artfully planned and written (by Hooper and Kim Henkel) as it was. The reality of a dangerous, absolutely not innocent world (Vietnam, post Manson-family fear still resonating in the culture, Manson-family-like hitchers, whatever the hell is in our meat) is amped up into a horror movie that feels almost like a documentary-fantasia. As told in a 1986 L.M. Kit Carson essay in Film Comment, Hooper talked about the movies in his head:

“I can remember my first 6mm lens-shot looking up out of the crib at the shadows dancing on the ceiling. At the same time, I was learning to talk, I was learning to see everything in camera coverage: wide shots, close-ups, etc. I didn’t exactly know I did this until I was about 20: one evening outside San Francisco I was watching the Pacific Ocean from a Cliffside—suddenly the Panavision aperture in my head widened and went away. And I realized that all those damn years I’d been shooting movies, with and without a camera.” 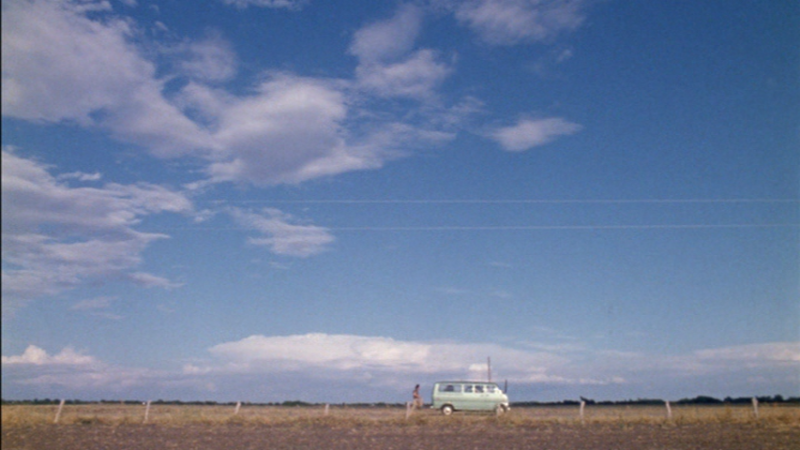 You absolutely get that Hooper’s been shooting pictures in his head, and may even worry about him a little. From the low angle shot of Teri McMinn’s Pam walking from the swing; to the wide shot of the demented hitchhiker, Edwin Neal (incredible here, he’s so needy-creepy, but you almost feel sorry for him), kicked out of the bus and flailing his arms, practically dancing some kind of pagan invocation (that moment always, always sticks with me); to Hansen’s Leatherface exploding out of the sliding metal door with such a shock and such perfect timing that it never fails to surprise; to the opening credit sequence (that magnesium flash sound); to the brilliant set piece at the family dinner table, where everyone involved (Burns, Neal, Hansen, Jim Siedow, John Dugan) were actually losing it from shooting in the heat and with extreme exhaustion and whatever else was going on (read this fascinating piece from Texas Monthly all about the shoot), the picture is visually stunning and sui generis. You are dropped into a sort of fairy tale – Little Red Riding Hood meets the Big Bad Wolf’s weird-ass family or Hansel and Gretel pick up the Ed Gein’s long lost brother – and further understand that those Grimm tales resonate because they were produced and imagined from the horrors and fears of real life. With that, the picture became its own kind of fable – not warning tale, for it never works that kind of obviousness – but a lore that soaks into the collective consciousness almost as if it actually happened. Indeed, the opening narration, intoned by a serious John Larroquette, makes it seem as it did. Spawning sequels and even a bad remake along with countless essays and academic study and late-night screenings and discussion and controversy, it’s a movie that is watched endlessly but never softens with age. It never de-sensitives, even as the violence is relatively bloodless. 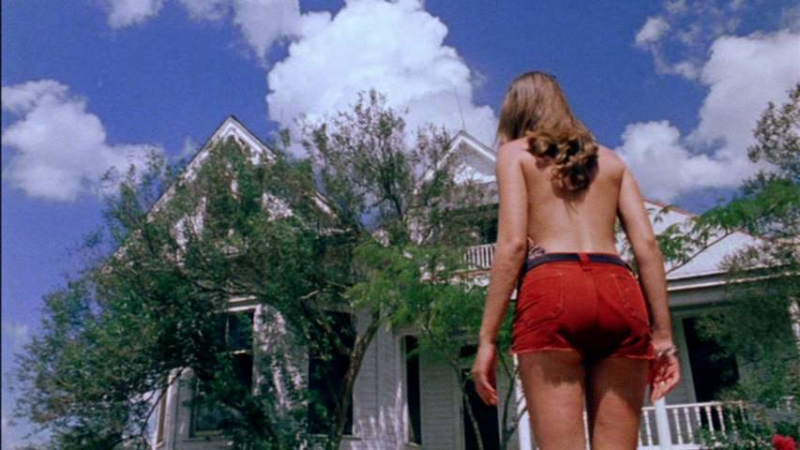 And I think that’s a positive within all of the mayhem presented within – we should be sensitive to violence, we should be disturbed by what is depicted in the film. Further, we should know or, rather, accept, that some things cannot be explained – life is scary and dark and it makes little sense at times. Life is also, like the film, darkly humorous. In the picture, the humor comes in a way that makes you catch yourself. You are almost laughing or you are laughing, and, not out of delight, but out of some blacker place, or maybe for relief, a relief that doesn’t really come. Kind of like how those nice, twangy country songs on the van’s radio don’t help soften things either – my favorite is “Fool for a Blonde” by Roger Bartlett & Friends, a song poor Sally will likely think of differently once this is all done. With all of this swirling together and with the images and sound design, the film’s humor is blurred with the horror in a curious way – it’s unsettling and mysterious. I think of when these Texan teenagers take a little break from their road trip, and that old man is seen yammering on – an old guy no one really pays attention to (except us) – but they should. He says: “Things happen here about, they don’t tell about. I see things. You see, they say that it’s just an old man talking. You laugh at an old man, it’s them that laughs and knows better.” 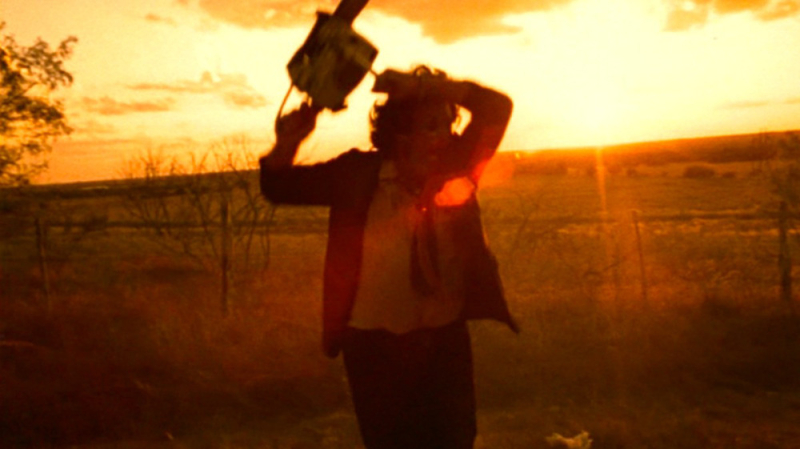 Indeed. And laughing with the film feels dangerous because the film itself does – every corner of the thing. How many movies still feel threatening after all these years? Movies that you think about on long road trips through isolated areas or movies that come to you, giving you a chill when you encounter a strange person at a lonely gas station? Would you ever dare pick up a hitchhiker (which seems scarier now since few thumb rides anymore)? This is a movie you dream about, or thought you dreamt – those awful chase dreams – running and screaming on endless loops in the dark night as poor Sally does. Often you can’t scream in those dreams, and you want to. In The Texas Chain Saw Massacre, Sally’s screams – from her long run fleeing Leatherface, to the demented experience at the family dinner table – are not freeing or even helpful. 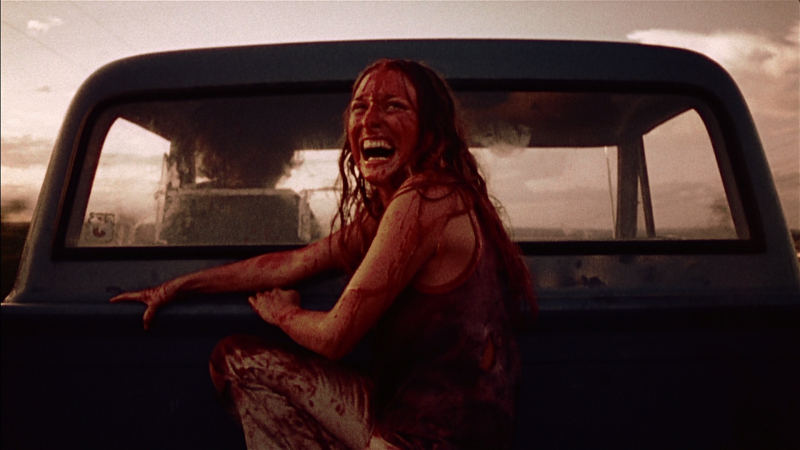 They are choked with desperation and, finally, exhaustion. And we are exhausted right along with her. Thank God she has the strength to bust out of that house, saving herself, and, as a result, is saved by that trucker, the one light in the darkness. Smiling (or some version of horror-smiling) and covered in blood in the back of the truck, nearly embracing her potential freedom (please, don’t let the truck stall or the driver turn into an evil monster, we think), Sally is finally, finally, getting the hell out of this nightmare. It’s a beautiful and poignant scene: it’s that one moment of hope for the world and almost happiness. Almost.