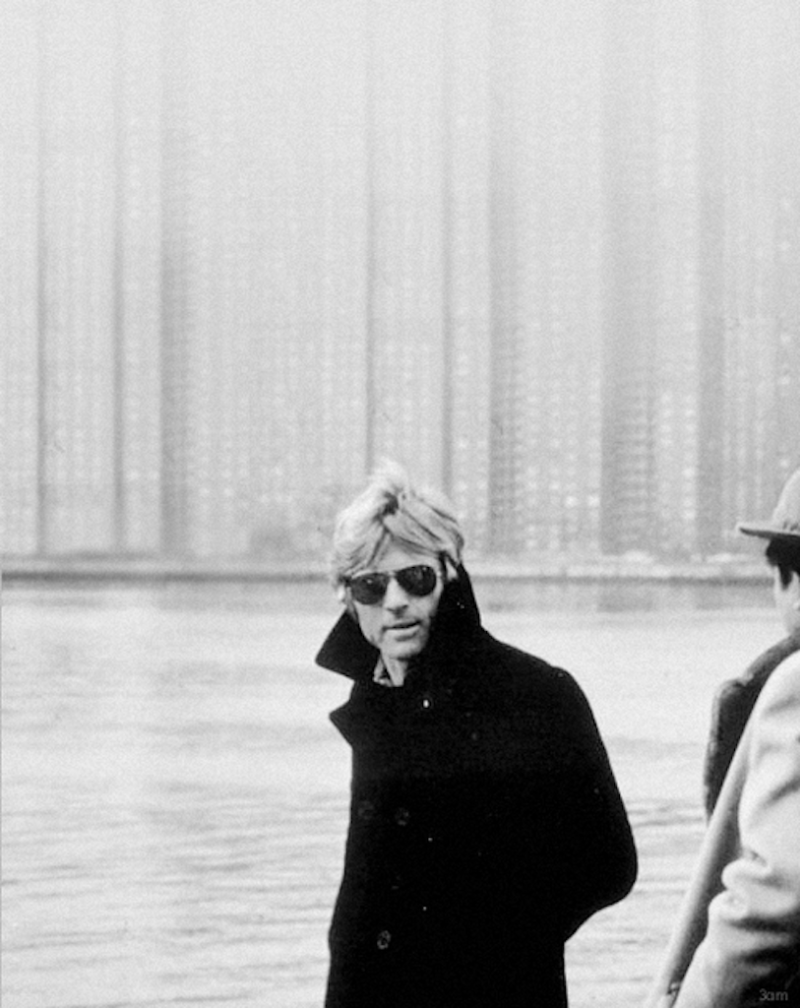 From my New Beverly piece on Sydney Pollack's Three Days of the Condor, the perfect Christmas movie, especially now.

Kathy Hale: Why did you tie me up like that? I mean, you thought I’d call the police. I wouldn’t have.

Kathy: Well, sometimes… I take a picture that isn’t like me, but I took it, so it is like me. It has to be. I put those pictures away.

Kathy: We don’t know each other that well.

Joe: Do you know anybody that well?

“Lonely pictures.” So says Robert Redford’s on-the-run CIA analyst Joe Turner in Sydney Pollack’s Three Days of the Condor, stopping for a moment to contemplate the photographs of the woman he’s held hostage in her own apartment while fretting over his endangered life, the CIA, his dead colleagues, including his dead girlfriend, and later, a CIA within a CIA, oil, invading the Middle East (prescient), and whatever else is going on in that big, frightening, treacherous outside world. The woman, Faye Dunaway’s Kathy Hale, sits nervously (and it’s Dunaway-nervous, a mold-breaking kind of neurotic that’s unmatched by any other actress), looking at the man who is about to tie her up, maybe rape her, trying to believe his story or not believe his story, while he muses over her doleful black and white pictures of empty park benches and bleak trees. She answers with some defensiveness, it’s her art after all: “So?” We’re with her on this one — what’s wrong with lonely pictures? He says, “You’re funny. You take pictures of empty streets and trees with no leaves on them.” Suddenly this beautiful, word-filled man with an unusual job of reading everything all day feeding codes and plots into a computer, realizes that this beautiful, visual woman who takes pictures of chilly emptiness, has a life beyond an available car and warm pad he can hide out in as he attempts to unravel an insane conspiracy closing in on him. Now he’s trying to figure out her pictures. She again defends her photography (and obscures its meaning, she’s private, and some man has forced himself into her domain and starts deconstructing her art, who can blame her): “It’s winter,” she says.

It is winter. And it’s Christmastime, and Christmas music is playing all over the movie – all of these cheery, classic carols taunting these characters who, like a lot of people during the holidays, are stressed and sad and fucking irritated by aggressive happiness and all this “Good King Wenceslas” business, ready to practically kill themselves. (Recently, at Slate, Daniel Harmon made the excellent claim that Condor should be considered a Christmas classic. I agree. I re-watched the movie last year during the holidays and it made me feel better about the gloom of forced cheer.) Kathy’s preparing to go on a ski trip with a boyfriend and you get the feeling she doesn’t really want to go. (Perhaps this is just me but I always read this like she’s being forced into an activity her boyfriendlikes to do –  ski – when she’d rather be taking pictures). But that is now. Joe’s not buying that winter excuse because he’s so damn specific. Trying to get to what’s really going on here, her sadness and alienation, a situation that reflects his own and one he’s now thrust on her tenfold (she, too, has to figure out who to trust in order to survive), he says: “Not quite winter. They look like November. Not autumn, not winter. In-between. I like them.”  That he’s so particular could be annoying (so she took these before Thanksgiving? So what?), but it’s not, he’s genuinely halted to consider this human being before him and just why she’s running around in-between winter, before all the obnoxious holiday music drowns the world, taking photographs of forlorn objects and leafless trees. It’s also not corny, as some critics suggest, like the symbolism is supposed to resonate so much that we’re awestruck by Pollack’s meaning. He knows we get the symbolism; it’s more that Joe is actually trying to consider her work and her and have some kind of connection. What’s wrong with that? And a lot of people, those curious with one another, would have that conversation. I love how she answers so simply: “Thanks.” What the hell else is she supposed to say? This is not the same Dunaway as Helmut Newton sexy-violence-high fashion photographer from The Eyes of Laura Mars and he’s not Tommy Lee Jones (though Dunaway is forced to face another insane situation and work through her art), but it would be interesting for these two women to meet up in in the near future. They could discuss how colossally fucked up the world is and how it’s reflected, beautifully, in their photographs. Oh, and what about the Pentagon Papers? Watergate? Alan J. Pakula’s Klute and The Parallax View?

The mood around the fantastically entertaining, politically-charged thriller, but, still, sad and rightfully paranoid, Three Days of the Condor, reminded me of another film photography discussion: Alan Arkin’s adaptation of Jules Feiffer’s darkly comic masterpiece Little Murders, also a film about alienated people surviving New York City (albeit with less Hollywood sheen, and more hilariously heightened paranoia). Marcia Rodd’s first sort of date after her violent “meet cute” finds her in Elliott Gould’s apartment, looking at what? His photography. Gould one-ups Dunaway’s desolate park benches by taking endless pictures of unhappy dogshit. And like Dunaway, he’s good at it too. Rodd compliments his pictures, but then starts psychoanalyzing in a more critical way: “Isn’t that awfully limited?”  Gould explains this is all he likes to do and she says, “No wonder you’re depressed.” He says, calmly, bemused: “I’m not depressed.” She doesn’t believe him: “So, this is it? This all that you do? You don’t… ski?” All Gould can say is, “Ski?” You get the feeling Dunaway’s unseen “tough” and “understanding” boyfriend has said the same damn thing to her. “You really need to ski.” At least Redford gets her pictures and before they sleep together, asks to see more of them, the ones she doesn’t show people. And, to me, that is part of the reason why she begins trusting him. Though some critics at the time (and now) don’t buy the romance between them, and the rapey undertones – that she would consent to sleep with a guy who has previously pushed a gun in her side, threatened violence and tied her up in the bathroom while pacing around her apartment rambling about reading for the CIA and who would invent a job like that and people are trying to kill him – because what the hell? This is a guy who looks like Robert Redford rambling insane shit, not a guy who looks like David Berkowitz. But so what of that – she’s a visual person – and this movie idol man is believably truthful (not “kind” she says about his eyes, but honest) and they have undeniable chemistry (you never know who you’re going to meet and how), that it’s sad when he’s worried he can’t even trust her at the end. As Pollack said in a 2007 interview: “It’s about a man in a paranoid business who trusts everyone – and he turns from that to a man who’s suspicious of everyone because of what happens to him. In the process, he meets a girl who trusts no one, who has her worst nightmare happen – a guy kidnaps her at gunpoint – and she finds that she blossoms. So, at the end of this movie, when they say goodbye, he’s the suspicious one, suspecting that she may tell on him.”  Yes. That she finally believes his situation and helps him is not only touching, it’s also essential to Joe’s survival. Without her, he’d be dead. 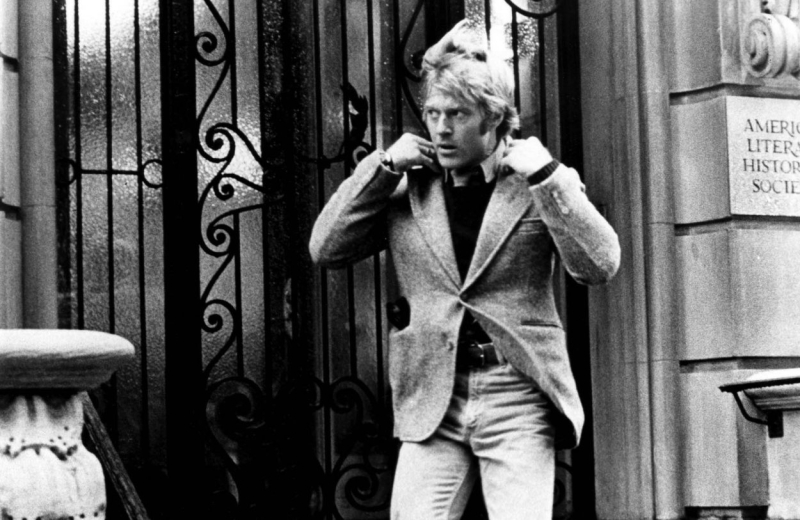 We follow Joe, thrillingly, from one reveal after another, all of the layers culminating in a face-to-face with Max von Sydow’s brilliantly cool assassin Joubert (rogue for hire) who becomes (stick with me) something like Kathy: After all that, he helps Joe too. After offing Atwood (Addison Powell, CIA Deputy Director of Operations for the Middle East – the boss to Joe’s senior, Higgins (Cliff Robertson), CIA’s deputy director of the New York division), he warns Joe of smiling men in cars who look trustworthy but aren’t (Kathy would never trust someone like that either, just as Redford running up to her in the street outside her car showed, and which her photography suggests). He recommends Joe become an assassin too – move to Europe – he’s good at this stuff. In their final scene, Joubert even brings up Kathy, the observational details, asking if he chose her based on age, her looks (Joe says it was random). Joubert hands him a gun and gives him a ride. We also wish for a moment (perversely, given the presented future occupation), that they’d go off together. Kathy, a fine suspicious fit for Joe and skilled at observation herself, had to leave. Taking off with von Sydow’s seductive, fine-boned creature seems appealing. But alas, Joe claims he’d miss America too much. “A pity,” Joubert says. 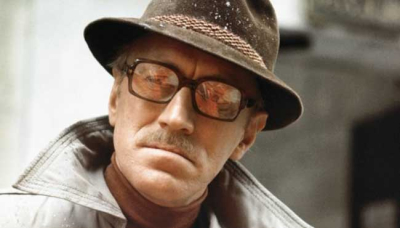 And, then back to Christmas in New York City. (The movie was adapted from James Grady’s novel, “Six Days of the Condor,” which I’ve not read, but it mercifully cuts down the timeframe of holiday hell). By the end, a smiling Higgins has a car for Joe on a crowded holiday-bedecked street while a likely miserable, alcoholic freezing-his-ass-off Santa Clause is ringing a bell. “God Rest Ye Merry Gentlemen” is being sung (again, madness-inducing) while Joe attempts some kind of power through the press. It’s ambiguous if that’s going to work and Higgins tells Joe to get ready to become like one of Kathy’s photographs: Lonely. What the hell is going on in America? The world? Who to trust? Will any of this shit work? Merry Christmas.