The Greatness of Grier: Jackie Brown 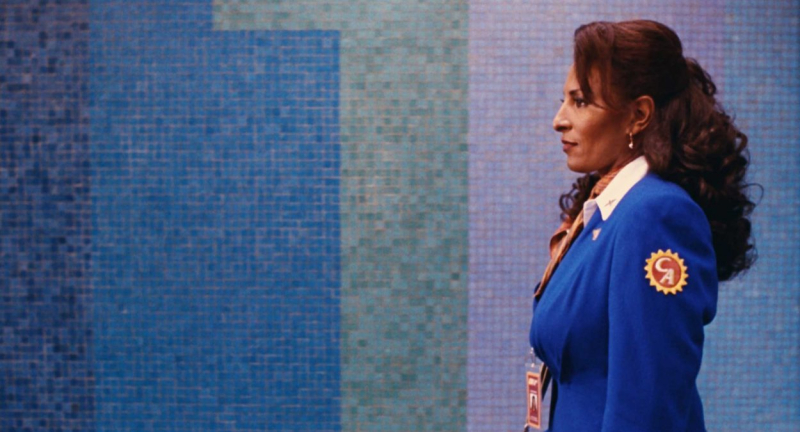 “I was saving every dime and I was so crazy and heartbroken thanks to a third attack on my life, which nearly killed me. It’s not in [the memoir]; the editors took it out. But that’s when I changed because I fought back. This was the ultimate decision that changed me into who I became. I’m now working on a film script about my life, and we put that third attack back in. Because that was the moment where I said, ‘You know what, I don’t give a shit about marriage, I’m so tired of men raping women and getting away with it.’ For several seconds during the attack, I went fucking crazy, all hell broke loose. I was so mad at the world. So I went back to Roger [she went to the Philippines to shoot movies with Roger Corman] and asked, ‘Is that job still available?’ I needed to get away. He told me to read Stanislavski, and I did and grew at such magnitude. I’m so respectful of the actor. I was approaching these B-movies like it was Chekhov or Tennessee Williams. For me, it was just like theatre, and there is no take two. You’ve got to be perfect. I had to go to the other side of the world to find out who I was. I didn’t think I would survive it, but here I am talking to you.” – Pam Grier, in an interview with Globe & Mail, 2015 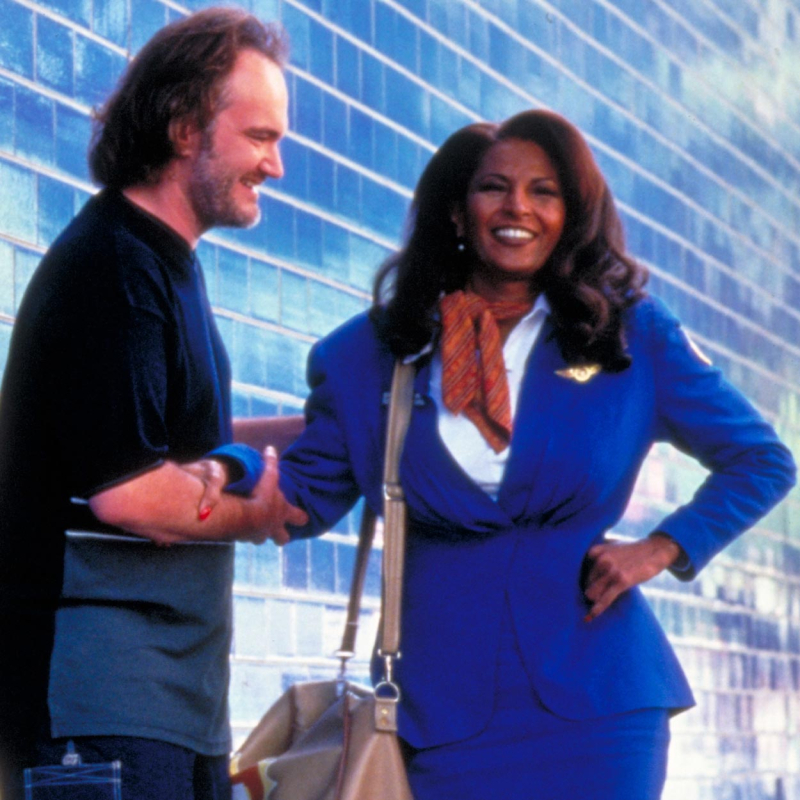 “When I originally was sent and read the script, I thought I’d be paying the dope ho, with the bra and the hotpants. When Quentin said I wasn’t, I asked him what role I was reading for, and he said ‘You’re not reading! You are Jackie Brown!’” – Pam Grier, Empire Magazine, 2011

When Robert Forster’s older, still handsome, slightly tired, calm and cool bail bondsman Max Cherry first eyes Pam Grier’s Jackie Brown, his pickup from jail, he falls in love with her. Right then and there. And he can’t even see her clearly. She’s walking toward him in the slightly disheveled flight attendant uniform we previously saw her sporting, crisp and flattering even if for crappy Cabo airline, opening the movie’s credits in the tiled LAX tunnel while Bobby Womack’s “Across 110th Street” plays. We’ve taken in her beauty, her power, her vulnerability, her simultaneous mystery and realness – we know what she looks like, we know what she acts like, she’s smart. We also know she’s in trouble, she’s tired, stressed and, as Michael Bowen’s jerk-off Los Angeles cop Dargus has stated to her: “You’re forty-four years of age. You’re flying for the shittiest little shuttle-fucking piece of shit Mexican airline that there is. Where you make what? $13,000 dollars a year?” 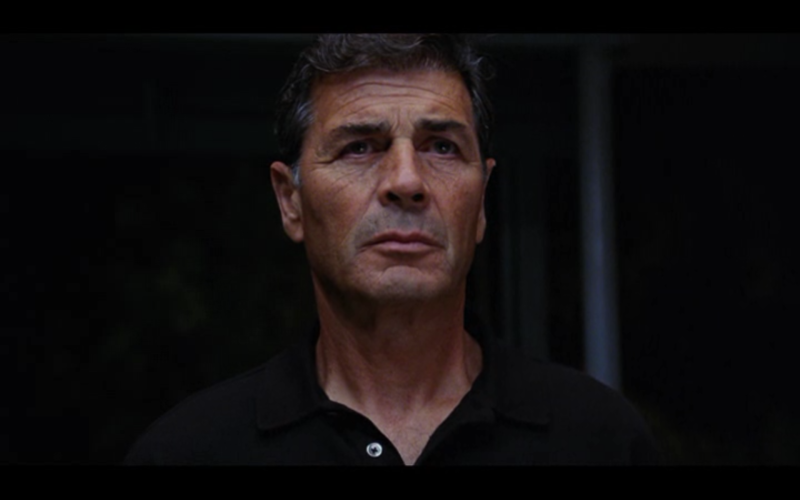 Max is informed of some of the details, but he’s not thinking about that as Bloodstone’s “Natural High” kicks in  filling up his smitten brain while she walks closer and closer. He just knows whatever is emanating from this woman – she is the one for him. When they’re face to face and he’s looking at Pam Grier, the chemical draw is in full focus, and there’s no doubting the attraction. We’re not sure how she feels about him — She’s understandably exhausted, she  needs cigarettes and wouldn’t mind a drink when he requests one. Only, she wants to go to a dark bar. “Why?” he asks. “Because I look like I just got out of jail, that’s why.” 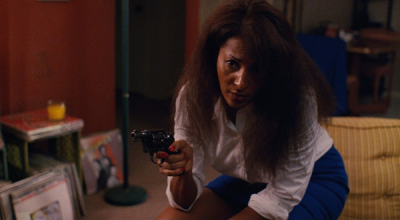 Well, there’s a lot more going on here in Quentin Tarantino’s Jackie Brown as we’ll see later in the evening when Jackie manages to nab Max’s gun from his glove box and works out a plan with the arms dealer she’s been smuggling cash for (Samuel L. Jackson’s charming, funny but not messing-around-and-will-fucking-kill-you, Ordell).  It’s all so beautifully crafted, so layered, so full of multiple emotions – Jackie’s stress, survival and smarts, Max’s by-the-book life fogged up with love, Ordell realizing he’s underestimated Jackie. In another movie, a dumb movie, Max would spy the gun missing and suddenly get pissed, violating his cool. Not in this movie. With a script brilliantly adapted from Elmore Leonard’s “Rum Punch” by Tarantino (his only adapted screenplay), this movie knows that Max isn’t a square. He may be an efficient, decent-hearted bail bondsman, but he’s got street smarts and wisdom and, even if he’s fallen in love, he’s not fallen stupid. So, in the morning when he returns to Jackie’s apartment asking about the gun, not only is he not angry, he even suggests she keep it for protection as he sits down for a cup of coffee. She puts on the Delfonics’ (vinyl) “Didn’t I (Blow Your Mind This Time)” and they discuss something you don’t hear much in movies without a lot of pity or annoyance or Diane Keaton’s Nancy-Meyers-written Erica Barry bemoaning her need for turtlenecks while living a charmed life in a beautiful house on the beach in the fucking Hamptons – aging. Max isn’t too concerned about it (he says) although he felt insecure and did something about his hair he confesses, while telling Jackie he doesn’t feel so sorry for her as she still looks about 29 years old. 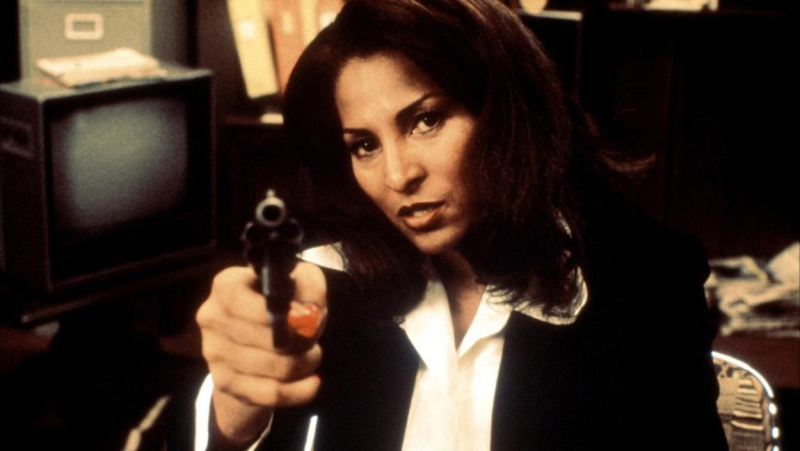 Yeah, well, she’s got beauty, sure, but she’s got something more frightening to deal with as she gets older. Jackie says, “You know I make $16,000 dollars a year plus retirement benefits that ain’t worth a damn. And with this arrest hanging over my head, Max, I’m scared. And if I lose this job, I gotta start all over again and I ain’t got nothing to start over with. I’ll be stuck with whatever I can get. And that shit is more scary than Ordell.”

Suddenly the movie becomes so much more than a crime picture, a heist job, a valentine to the ’70s, or a neo-noir (though it’s all of those things), and delves into the reality of gender, race, class and the very honest struggle of a smart, single woman just trying to get by in a hard world. There’s no typical tropes hovering around for the movie to cheaply milk – no kids, no long speech about her ex pilot husband, no dumb neo-noir femme fatale moment where she’s trying to be vampy and double crossing (Jackie does not need to try to be sexy, she already is, and Max sees it even after her night in prison, wishing she could take a damn shower), that the movie, at times, almost feels like a miracle. Who makes movies like this? And why aren’t more movies like this? 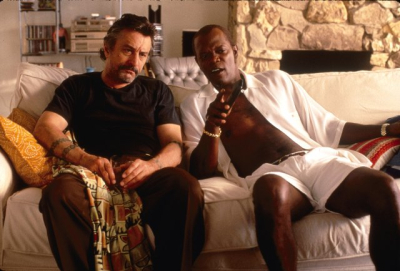 Like Tarantino’s direction itself – stylish, cool, tight, but also relaxed, taking its time, in profile close-up, to show Ordell thinking, or Robert De Niro’s hilarious but deadly Louis, trying to figure out the phone, or Bridget Fonda’s stoner beach bunny sweetness mixed with amusingly acerbic shit talking, or Michael Keaton’s ATF agent chomping his gum, a little bit of a douchebag but not a terrible guy. There’s also the fantastic soundtrack adding heft and emotion to actors already doing the same. All of this surrounding Pam Grier who is, in a word, complex. And Grier plays this so convincingly and so movingly, that when you rewatch the film, you realize you’re watching one of the greatest works by an actress in now, almost twenty years. And a rare one, given that a 40-something African American actress is actually the star of a movie made by a major filmmaker.

Tarantino doesn’t get enough credit writing fantastic, complicated roles for women. Like other “tough” directors before him, Samuel Fuller (whom he thanks at the end of the picture), who wrote and directed women as multi-dimensional human beings (The Naked Kiss, Pickup On South Street, The Crimson Kimono, China Gate) or Robert Aldrich (Autumn Leaves, The Killing of Sister George, Whatever Happened to Baby Jane?, Hush, Hush, Sweet Charlotte, The Legend of Lylah Clare), Tarantino writes a woman not just as “ass-kicking,” and “strong” but also as a person with interests, a life, intelligence, wit, vulnerability. Uma Thurman as the multi-faceted action hero assassin, “The Bride” in Kill Bill Volumes 1 and 2 is a supreme example, as is Death Proof (where women not only know about cars, but actually know how to properly drive one, like really know how), Inglorious Basterds and even The Hateful 8 where the baddest bitch is not just a bitch, she’s actually planned what goes down (some critics were offended by this character and how she was treated, I found her fearless and wonderfully hateful. As the title of the movie states, this is not a movie about the forgivable five and she’s not getting any breaks for being a woman…) all of these pictures give us sides to both very real women and very heroic women, without being cute or condescending about it. Never do you feel in any of these movies, something like, “Hey wouldn’t it be cool to show a woman who knows what the hell the Vanishing Point car is?” They just know this. Like a lot of women do. 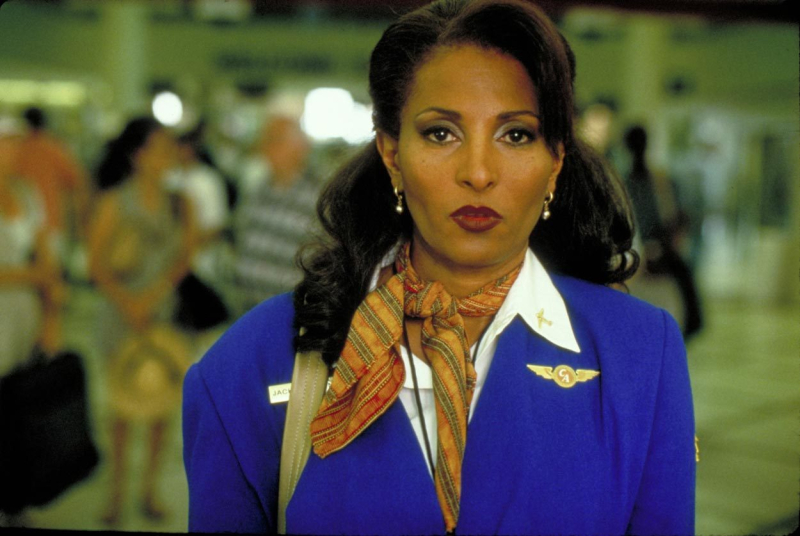 Which is why Grier is so powerful and poignant in Jackie Brown. Many might have assumed her cult icon status from Foxy Brown, Coffy and The Big Doll House would mean she would be working with her “black belt in barstools” – and that is quite something. It’s inspiring. Those are important roles. But Grier does so much more, internally, as Jackie Brown. In one scene, after the switch-shopping bag-trick in the ladies room, she’s been interrogated by Keaton’s Ray Nicolet who is wondering… what is she up to? He leaves the room, and she sits there, defiant, but scared, wiping tears from her eyes – tears of “Holy shit, am I going to pull this off?” It’s a moving and strong observation of a woman who is keeping it all together. She is balancing so much stress and so much future stress, but she’s also a smart, proud person who is trying her hardest to make it through. That will make a person emotional. Not weak. Emotional. And if she’s using Max, well, she’s not. She’s offered him a cut and she never lied to him. After asking if he’s scared of her, Max places his thumb and pointer finger together, and admits: “A little bit.” It’s lovely and honest. And then, in the sweetest, most romantic moment, they kiss each other goodbye. She’s got a thing for him too. 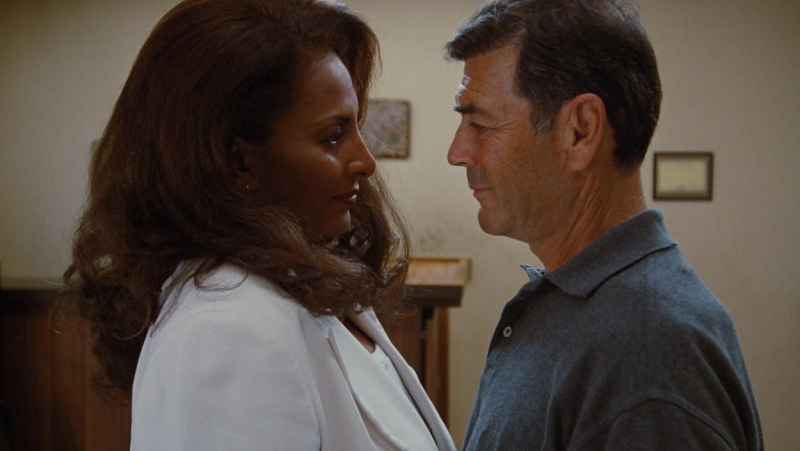 Once again, Max watches her with his soulful eyes but this time, she’s driving away, not walking towards him. Though he was worried about her and probably still is, he didn’t underestimate her from the beginning and he sure as hell doesn’t underestimate her now. That’s love but that’s also respect. And a wistful awe.
My piece for The New Beverly on Quentin Tarantino's Jackie Brown and the power of Pam Grier.  Don't miss it at on the big screen in QT's personal, beautiful 35 MM print at the New Beverly tonight!

For me,this is Tarantino's best film by a street.I also think that it his most touching and,for want of a better word,human film.The soundtrack is,as usual,excellent and the whole cast are good but Pam Grier and Robert Forster are head and shoulders above everyone else in it.As a viewer,you want Jackie and Max to get together,even though you are pretty sure that they won't,but the ending is beautifully played out.I wish Mr. T had made more films like this one.

Hooray for Bridget Fonda. She can go from this near-masterpiece to a bowl of crocodile shit like "Lake Placid' and she's still a marvel. Wish she'd return to acting.