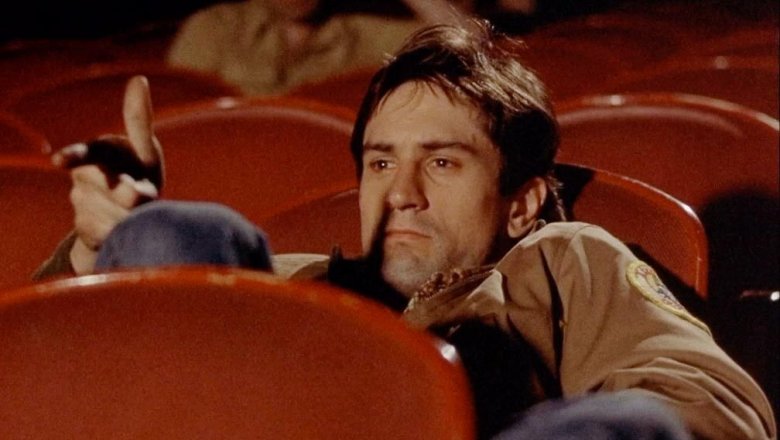 It's the 40th anniversary of Taxi Driver. Here's a repost of my piece, from 2011, when I saw its new restoration in Berlin.

Last night in Berlin was the world premiere of the 4K restoration of Martin Scorsese's 1976 classic, Taxi Driver. Not surprisingly, and after many viewings throughout my life, the movie, all red light and red blood and red anger, is still lingering in my mind. And Bickle's above proclamation, "morbid self-attention" is more relevant today. So much of the picture feels frighteningly prescient. Like The King of Comedy, it seems to speak of an entire oncoming generation -- Travis Bickle's and Rupert Pupkin's, primping (inadvertently or on purpose) for their 15 minutes of fame and glory. 15 minutes and more. From Bernard Goetz to Reality TV to TMZ to YouTube to Twitter, we love to celebrate or watch or laugh at our misfits, our train-wrecks, our crackheads and ... ourselves, ready for their (our) close-ups on ... anything. We're not the Me Decade/Generation, we're the Look at Me Generation.

Screenwriter Paul Schrader and supervisor of restoration, Grover Crisp, were there to present -- Crisp going over the technical details; Schrader to briefly tell us what inspired his screenplay, a screenplay he wrote at a mere 24 years old while he was living in his car. Schrader admitted to feeling like Travis Bickle, and even owning a gun. That he, at one point, realized he hadn't talked to a single person in a month, and was so alienated by the city, that he felt he was dying a young death in his auto-coffin. He may as well have been a night shift taxi driver. Schrader said that "he had to do something about it." Much like Bickle attempting to gain advice from the Wizard (and the Wizard's advice is awful), because he felt like he was going to do something ... he just didn't know what, and that he was worried about it (a moment in which we feel terrible for Bickle, reaching out, receiving nothing), Schrader was worried too. He was going to do something.

He took that anxiety and anger and did do something -- he wrote Taxi Driver.

Here's the back-story of the restoration via the Berlinale:

"In order to restore the film in spring 2010, the original 35mm negative was first read by a high resolution 4K scanner. The film was also re-graded and digitally restored in 4K: the media files were restored by Sony Pictures in California under the supervision of Grover Crisp; Scorsese’s cinematographer Michael Chapman supervised Scott Ostrowsky as he created a colour matched version that was approved by Scorsese. The 4K files were subsequently given a digital clean up by MTI film in Los Angeles. This involved removing scratches, stains and tread marks from the archived negative. Some scratches proved especially difficult to remove without altering the underlying imagery, particularly the faces of characters. The restoration of the sound was equally extensive and involved the production of a new multi-track stereo soundtrack from the film’s original recordings. The final version of the restored film was approved by Martin Scorsese in January 2011."

To see the film on the big screen (which I hadn't viewed, writ large, since college), was a revelation. There's been much debate about the restoration of the picture -- that it might take away the grit of Travis Bickle's New York City -- a city that he discusses in terms of filth and scum (which made me wonder, while Bickle was telling his surprise cab fare Senator Palantine the needed changes to the city, if this had been Mayor Giuliani's favorite movie). But watching the movie, I believe the right balance was achieved. Never once did you feel like you weren't in NYC 1975, never once did you think the vibrant reds took away from the dirty streets, the garbage, in fact, they only seemed to highlight them more. I always though that even Betsy's dresses, often red striped or pure white, were an interesting counterpoint to the junkies and lowlifes (who were also, incredibly vibrant, even before restoration) -- she is, of course, an "angel," as Travis proclaims her. But soon, to him, like all the rest of them.

And the film, as gritty as it is, was always beautiful. Just the shot of the cab in the mist ... like something from a dream. Or Matthew ("Sports") slow-dancing with Iris, a sick moment of pimp manipulation set to the romantic Bernard Herrmann score (on their phonograph), that manages to be creepy/gross and lovely all at once. And there with that bright red -- Matthew's red polished fingernail clutching Iris's hair.

So many moments of the movie you notice even more on the big screen, and in such crisp detail. Bickle's clear racism is more apparent and disturbing (and, I will add, his fear). And even the humor, which does exist in Taxi Driver, is funnier. And not just in the Albert Brooks moments. There's something about Travis not understanding "The Pilgrim" by Kris Kristofferson ("I'm no pusher ...") that's amusing (this beautiful woman is giving him a supreme compliment and he can't see it). And yet, he buys the record, a lonely, heartbreaking moment. He doesn't even bother to listen to it. (Also interesting that Schrader was raised in the tradition of the Pilgrims -- Calvinist -- this can't be a coincidence).

And yes, the final messy shoot-out is gloriously, horrifyingly gory, and hasn't been scrubbed to death to save our stomachs (or worsen them). It still combines a kind of grindhouse blood (so red ... but in some cases, a repulsive brownish red), among the cheap plaid suits and Iris's hot pants, and remains so recklessly real and beautifully composed all at once.

And finally, putting aside the restoration -- there's the story. The fall and rise of Travis Bickle. "God's lonely man." Critics and viewers often discuss the golden age of 70s filmmaking -- and Taxi Driver is certainly one of the era's highest achievements. But it goes so far beyond that. It's so incendiary, that I don't think it could be made today. And not only because of the advent of the blockbuster or the uber popularity of 3D or the idea that "real" characters have been wiped out of popular cinema, but because the movie, like some of the greatest art, feels so potently combustible. Oddly, not once did I think of John Hinckley during the movie  -- I thought of the world and I thought of myself.

Taxi Driver makes you ponder the world we live in, beyond New York City and now, and then, as a perfect character study, it makes you ponder yourself. Your soul searching, fucked-up, boot clad Cowboy and your soul searching, fucked-up, mohawked Indian. Because, truth be told, it's tough to not relate to Travis Bickle -- shy and disturbed, angry and self-hating, valiant and violent, and, in brief moments, with that weirdly winning grin, charming -- just trying to get organezized.