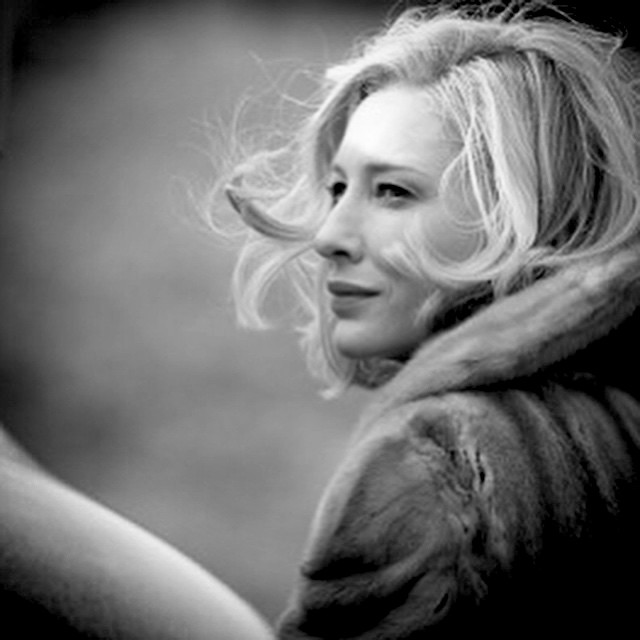 The Fall 2015 issue of Filmmaker Magazine is out and the cover features my interview with director Todd Haynes. We discuss his newest picture, Carol, Patricia Highsmith, Karen Carpenter and more. Here's an excerpt from the interview. To read the rest, buy the newest issue of Filmmaker or subscribe to their premium content.

“Persistently, I have the vision of a house in the country with the blond wife whom I love, with the children whom I adore, on the land and with the trees I adore. I know this will never be, yet will be partially that tantalizing measure (of a man) leads me on. My God and my beloved, it can never be! And yet I love, in flesh and bone and clothes in love, as all mankind.” – Patricia Highsmith 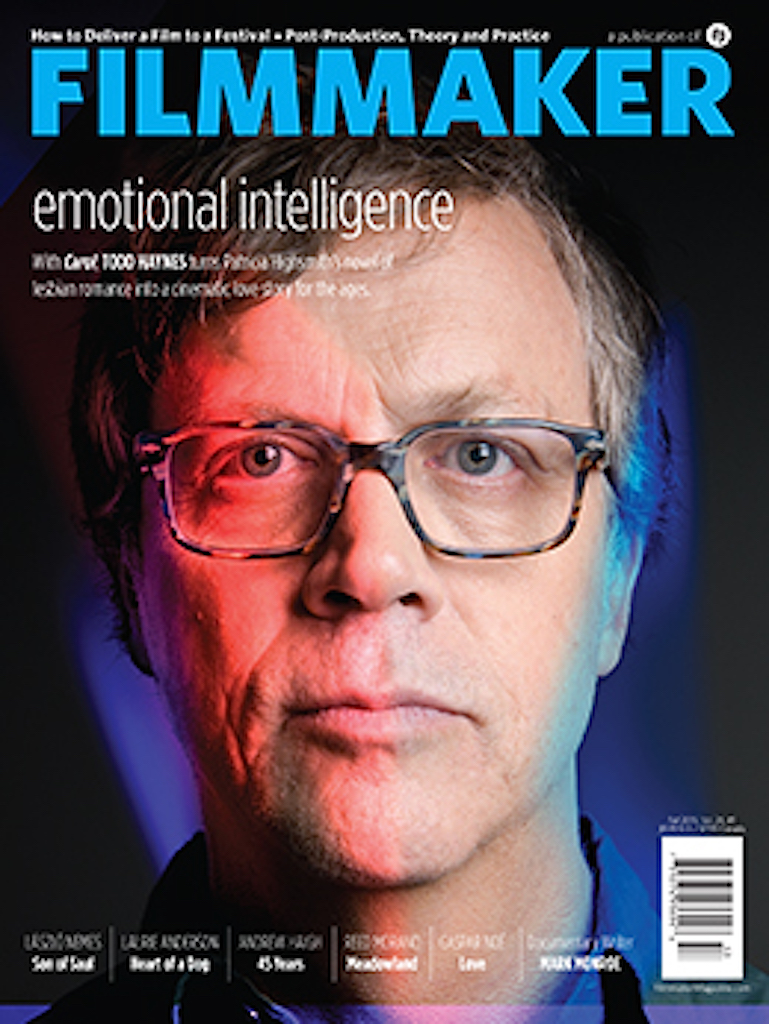 A key movie to first understanding Todd Haynes is his Karen Carpenter “biopic” cast entirely with Barbie dolls, Superstar. This 1987 short that, due to Karen’s brother, Richard, and music rights problems will never be released, seems to define not only Haynes’s subsequent cinema, but also how much he understands the ways in which popular culture, music and memories interweave with the struggles of being a woman, the struggles of sexuality and the struggles of controlling ourselves in a world that won’t really allow it. Superstar goes beyond Karen Carpenter, digging into our own memories and insecurities. For those who first heard of it and were curious (Barbie dolls?), the defining moment is when you realize how the movie isn’t a joke, a gimmick, or a load of Gen X irony; it’s thoughtful and disarmingly moving. Watching this Barbie doll — her face being shaved down onscreen, her plastic limbs growing smaller and smaller, her sad little voice fading off as her angry brother yells at her (“People gasp when you walk on stage!”) — you’re completely rapt. Haynes casts such a spell that you’re not even thinking about these characters as Barbie dolls; you think of them as human beings shoved into Barbie dolls as a sort of mask of supposed perfection. It’s such a brilliant way to tell the story you can’t imagine it being told in any other manner. 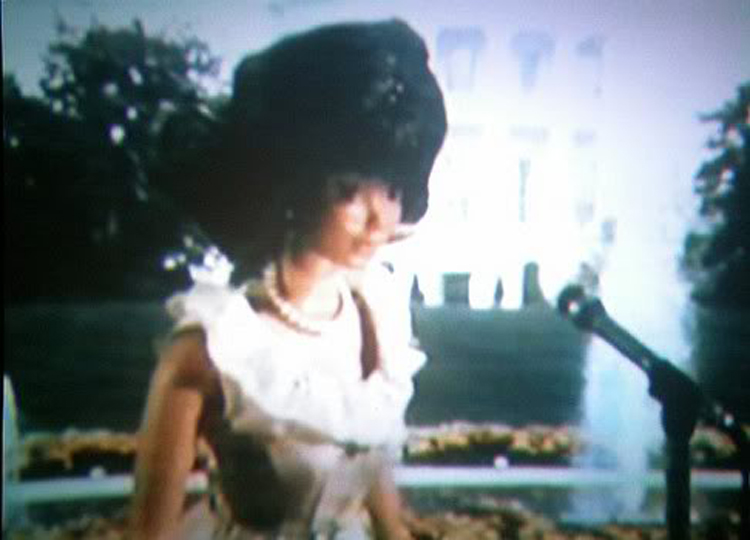 Haynes is a filmmaker who always reveals his intelligence. His study at Brown University, where he received a degree in art and semiotics, and his ever-curious brain, evolutions, experimentation and empathy are all apparent in movies like Poison, Safe, Velvet Goldmine, Far From Heaven, I’m Not There and his TV mini-series, Mildred Pierce. And yet, there is nothing showy about this intelligence; it’s not overly academic, it doesn’t present itself blatantly or in inaccessible ways. There’s joy there, too, and exuberance — watching Cate Blanchett’s skinny Dylan running around a Fellini-esque Pennebaker landscape in I’m Not There is mysterious, telling and exhilarating. 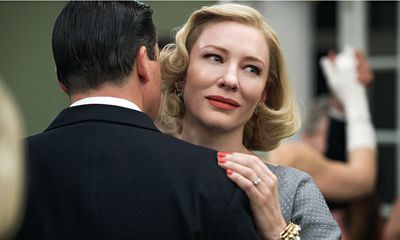 In his newest picture, Carol, Blanchett slinks into a department store wearing a creamy mink coat, all cool elegance like an early ’50s David Bowie, intimidatingly beautiful and furtive all at once. She’s a vision of near perfection but, like Karen Carpenter’s shaved face, she’s going to be unmasking the pain and fear she’s enduring through that thing that nearly always breaks us — falling in love. And falling in love with a woman.

Adapted from Patricia Highsmith’s 1952 novel, The Price of Salt, the film tells the story of wealthy housewife, Carol, who falls for a younger shop girl and budding photographer, Therese (Rooney Mara), as Carol’s marriage is falling apart and she’s trying, trying to live her life, keep her own child and find happiness as a lesbian in such a restrictive society. She can’t be open about it, but Carol wants to experience young Therese, and by all rights she should be allowed to, since she’s getting a divorce. The two embark on a road trip, on which her husband Harge (Kyle Chandler) has her tailed and recorded, evidence to be used against her in a nasty divorce and custody dispute. It’s a road movie, a look at lesbianism in the ’50s and, in some ways, a thriller, but it’s also just a beautifully rendered love story, a subdued slow burn that’s universal to anyone falling in love, and one marked by exquisite period detail, gorgeous, shadowy cinematography by Edward Lachman and a stirring score by Carter Burwell. And the excellent actresses share a chemistry that is so deeply felt that, when they finally consummate their gradual, somewhat timid courtship, the passion is not just typical overwhelming movie passion, it’s layered with a sadness that perhaps… this won’t work out. But perhaps it will? 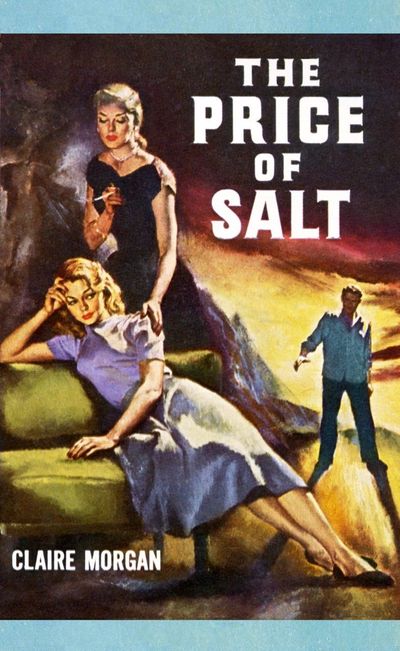 I talked to Todd Haynes to discuss not just Carol but the themes in all of his movies, how Patricia Highsmith works so well within his study of human behavior and how things aren’t worth doing unless you’re “afraid.”

Let’s start with a rather simple question: This is your second adaptation from a novel, and your first for a feature after your miniseries, Mildred Pierce, from James M. Cain. What drew you to the Patricia Highsmith novel, The Price of Salt? How did this start?

This is probably the first film I’ve directed that I didn’t really initiate myself. It had a long history of trying to get financed and written before I came on board. A window opened up in my schedule, and I knew a lot of the key people who’d been involved with it for the last several years, namely Liz Karlsen, the producer. The costume designer Sandy Powell was attached, my dear friend who I’ve worked with twice before Carol. Cate [Blanchett] was attached. So I’d heard about it. And then, all of a sudden, I had a moment of availability, and Liz, who goes way back with [producer] Christine [Vachon], as do I with Liz, asked her, “Do you think Todd would be interested in this project?” They sent me Phyllis [Nagy’s] adaptation. At that point, I didn’t know the novel. I read it all — the script and the novel — in May of 2013. I have to say, that book floored me. I really found it to be one of the great accounts of first love. I think it took Highsmith’s acerbic, hard-bitten, unsentimental sensibility to bring all of the power of a criminal story to the panic and the uncertainty and the frailty of early love. But then, it [also was] entirely a story about the amorous experience. The whole thing was just too interesting. I couldn’t say no.

The history of the book is interesting, too. It was written under a pseudonym, Claire Morgan, and became a popular book. Also interesting is that, like your movie, you can read it as maybe having a happy ending, unlike a lot of the more salacious lesbian novels of the time.

Absolutely. All true from everything I know about it. In the various Patricia Highsmith biographies, I read a little more about the [book’s] evolution. She didn’t always have this ending in mind, and there was a publisher or editor who encouraged her in this [happier] direction. And she didn’t write it under a pseudonym; she wrote it assuming that it might be her second novel published with Harper’s. But all of the mainstream publishing houses at the time were too scared by it, and her own professional advisors told her she should do it under a pseudonym. She was off to a very strong start as a novelist of the crime genre, and this might derail it. It did get published in her lifetime in the ’80s under her name, and, I think, the title Carol. 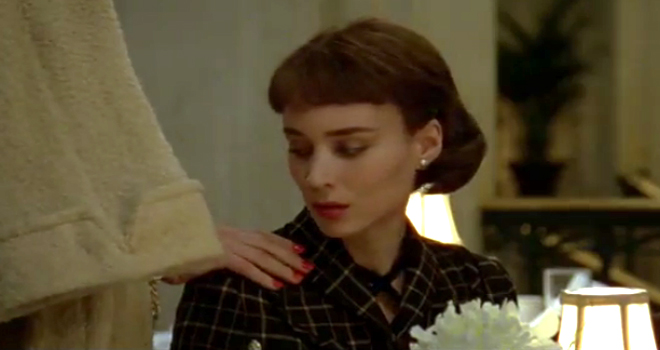 Did you find any parallels, when you researched Highsmith, with your own work? She writes a lot about identity, gender and sexuality, about psychological masks, hiding one’s own true self and how we create ourselves, via a character like Ripley. And I see that in I’m Not There or Velvet Goldmine or adapting your own body in Superstar. She also writes about the social constraints of trying to be yourself in a restrictive society, which you deal with in Far From Heaven. 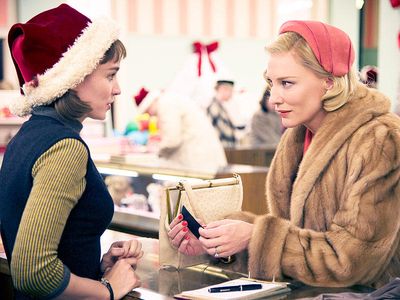 I don’t know if I necessarily saw direct, personal affiliations with it, but when you say that, yeah, I think there are interesting lines of thinking to be developed there. I think no one could have brought [Highsmith’s work] to the cinema in a more compelling way than Hitchcock —  and this is not just true with Strangers on a Train, this is true for many of her novels — but I do love that strange sort of linking of the homoerotic and the criminal in her work. Almost always male homosexuals are the subjects of that kind of alliance, and I do find that to be really fascinating. It doesn’t paint this positivist portrait of homosexuality, at least among men. There’s an unmistakable sort of fixation on it, and a way in which covert desire has to be transformed into something else. The two themes are always running in parallel with each other and unspoken about — or almost nearly unspoken, because it’s so prevalent in the work. It bristles through the Ripley stories and, obviously, Strangers on a Train and many [others] I’ve read. That desire, that instinct to tell a story about desire always having to be disguised, a desire that at some level is antisocial — I think, in that way, even The Price of Salt has to be included in that taste or tradition of hers.

To read the rest of this interview, buy Filmmaker on newsstand or subscribe for premium content here.