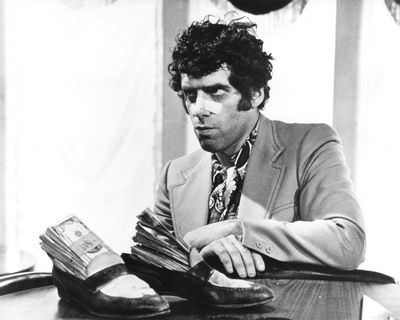 "I was friends with Steven Spielberg, and Steven and I were going to do California Split. I worked in Steven's home for about eight months. MGM said yes, and suddenly everything changed. Jim Aubrey, head of the studio, was the smiling cobra -- and the snake struck. He said, 'I want it changed. I don't want what's going on here. I want a straight movie. I want the Mafia to chase the two guys -- they owe the Mafia money. The Mafia catches the two guys, they get away. And I want Dean Martin to be the star of it. He wears a lucky chip around his neck, and he gets shot and the chip saves his life.' He even had the title for it -- 'You call the movie Lucky Chip. You've got to be kidding me. I pulled out of it with a hundred twenty-seven dollars in my pocket. People said, 'You are the greatest moron of all time. You should do what they want.' But to me I couldn't do it." -- Joseph Walsh (California Split screenwriter) 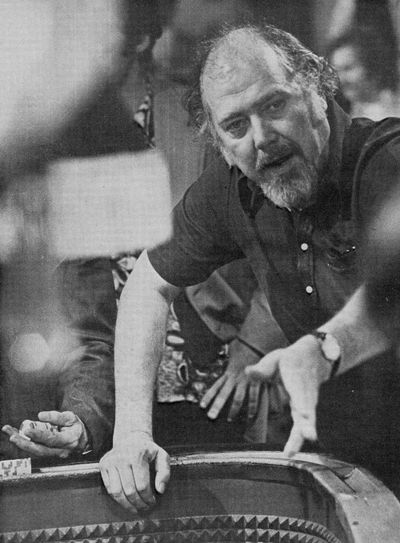 When Robert Altman made a picture about gambling, he didn’t hit you over the head with one of the most obvious and easiest ways to sap “meaning” out of a movie – the overdrawn, bathos-ridden addiction story. The sadness of lost lives, lost money, destroyed relationships, underscored, twice, in ink. But he didn’t make it all Rat Pack glamour either. The complexity and sorrow are all there, of course, but Altman allowed these feelings and concerns to creep up on you as you observe, laugh and, in the end, feel a little blue for two characters you grow to love. There’s a melancholy to winning and Altman got that. But there’s also a whole lot of fun in a life unfettered, especially when you’ve just met an exciting new friend. He got that too. There’s a reason people do things like gamble excessively – it can be thrilling tossing the dice, staying out all night and drinking in bars where some women don’t even bother to wear pants. How can we not get it? 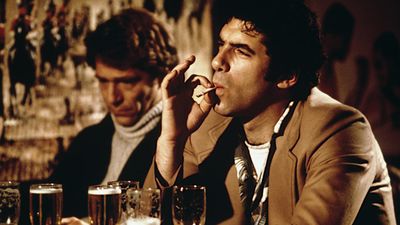 And how can we not with Elliot Gould and George Segal as our guides? Paired with the wise words within screenwriter Joseph Walsh’s autobiographical screenplay, based on his own gambling predilection and problem, Altman crafted one of those movies so special it’s hard to even write about.  It’s just so alive and breathing and real and charming and sad you can practically smell it. It’s a movie I turn to time and time again because, even if I know it’s not a healthy world, I want to be in that world again. I want to experience its off-kilter cool, its bummer vibes. I want to, once again, fall in love with its scruffy-cool, wisecracking, charismatic leads.

And you do fall for them. Segal, as magazine writer, Bill Denny, who bonds with Gould’s Charlie Waters, the more experienced gambler in something like their own love affair. Their relationship is one of camaraderie but, not so fast. Even Altman doesn’t let that become an easy kind of connect the dots. These men have mutual mysteries, are their own men, and probably, won’t ever truly understand one another like brothers. Gould, the fast-talking, charming rogue; Segal the more pensive, lonely and wary of the two. Their friendship always contains an edge – and since the movie feels so real and unexpected, you’re never sure what that precipice entails. Bill does find himself circling further and further into the money pit, which leads to a trip to Reno in a game in which former world champion Amarillo Slim (who plays himself) is one of participants. Bill wins and wins and wins and… what does that do for him? You have to think about it. And wonder if he’ll be OK. And if these two guys will ever be friends again. Probably not. And with no showdown between them, no big speech; you don’t need one. All you need is to look at Gould and Segal and you… just know. Through all of this winning, something has been lost. 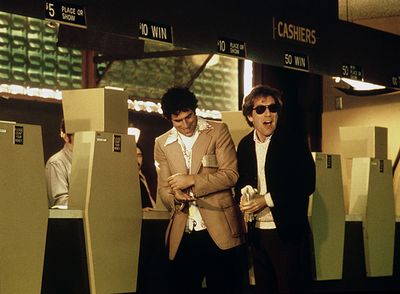 Reviewing Karl Reisz’s fine The Gambler (written by another great gambling enthusiast and addict James Toback), Pauline Kael made a point of mentioning California Split’s wonderful inclusiveness: “The big difference is … not just that Altman’s allusiveness is vastly entertaining while The Gambler seeks to impress us, but that California Split invites us into the world of its characters, while The Gambler hands us a wrapped package and closes us out.”

Along with the fantastic pairing of Segal and Gould, Walsh’s script helped allow us in, and he fought to maintain his voice every step of the way. That tension obviously worked onscreen, lending the performances such freshness, that no matter how many times you watch the movie, you feel a little disarmed. It always feels so new. On top of that, Altman cast many real-life addicts as extras, carpeting the movie wall-to-wall with lived-in faces, utilizing hise eight-track sound system to wonderful effect -- the gabbing of a minor player could add weight or humor to a scene. Gould and Segal are central, but everyone has a part, and even, at times, a voice, in California Split.

Altman places us in this unbalanced world of gambling addicts and eventual friends, with their varied adventures, games, female friends (or hookers, Ann Prentiss and Gwen Welles, who are never demeaned or condescended to and are given their own humor and humanity, something you wouldn't even see today), goons, oranges and conversations – conversations that veer from betting on the names of all Seven Dwarfs (“Dumbo wasn’t in that cast?”) to the fantastic statement, “Everybody's named Barbara.” 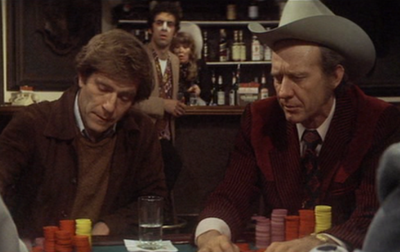 It all comes together so naturally that, at times, you can’t believe you’re watching a movie. And yet, it doesn’t feel like a documentary or something so real that you could view it all on your next jaunt to Reno. It’s pure Altman. He’s working in a universe that knows it’s human, knows it’s cinematic and knows it’s meaningful but isn’t going to tell you what to think or even what it all means. 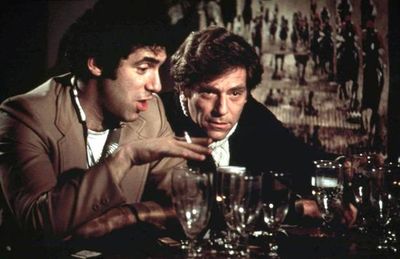 You must decide that for yourself. Along the way, you spend time with two effortlessly natural actors playing such incredibly different men, but ones who give you so much fun that when you feel the movie’s underlying sadness, it makes it all the more aching; all the more human, all the more bittersweet. And utterly inimitable.

California Split was followed by a discussion with me and Guy Maddin talking to George Segal and Joseph Walsh. Elliot Gould was set to attend, but was called unexpectedly for a shoot on "Ray Donovan." More to follow about our conversation, which was fantastic. Segal and Walsh are funny, smart, obviously enormously talented and incredibly sweet. They were the absolute highlight of Telluride for me. And, the below picture with George Segal, well, this was more than wonderful. 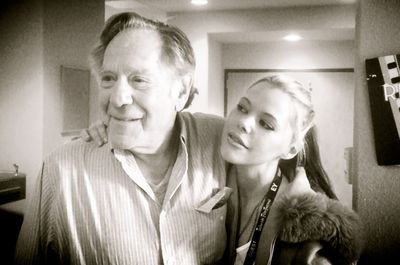 Well said. At times it feels like a documentary. Random and inevitable. You nailed it: inimitable.

Know the Walsh daughter...ballerina/choreographer..she's brilliant too.