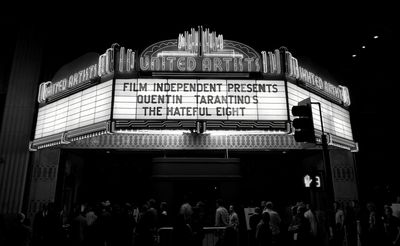 Without seeing a shot of it, not one spectacular sweeping frame, not one lovely snow-covered panorama, not one majestic vision of horses, “rip snorting through the bottom of the landscape,” I got it. I got it on stage with chairs and actors and pantomimed guns and imagined stagecoaches and blue coffee pots laced with poison. Quentin Tarantino is (hopefully) gonna shoot the hell out of his newest script, The Hateful Eight, and, importantly, in “big super CINEMASCOPE 70MM filmed gloriousness.” Those are Tarantino’s words, spoken directly from his script; words he repeats with a giddy exultation of cine-love that becomes both exciting and funnier the more you hear him say it. We see it in our mind’s eye and we truly understand it: super CINEMASCOPE 70 mm is fucking glorious. 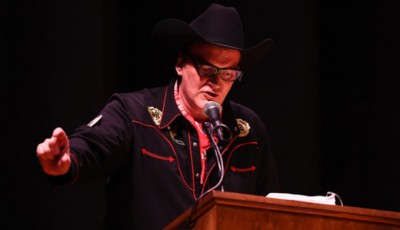 But will he direct it? That was the lingering question after the script was leaked, Gawker media was sued for copyright infringement (the suit has since been dismissed, with Tarantino allowed to re-file by May 1st) and Tarantino decided to do something unprecedented – perform a live read of the script, on stage with actors, and for just one night. Those of us who watched Saturday witnessed something special, once-in-a-lifetime, but something we’ll hopefully view in… “big super CINEMASCOPE 70MM filmed gloriousness.” Tarantino said before that, after the script leak, he wouldn’t shoot it, that he would publish the work instead. And now we've heard he will shoot, this winter, and then… this one-night-only event. Oh, he better make this movie. 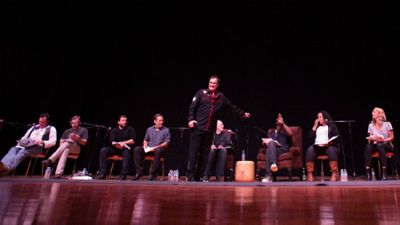 Taking the stage at the beautifully renovated downtown Los Angeles United Artists Theatre, a movie palace at the Ace Hotel on Broadway, Tarantino, clad in black cowboy shirt and black hat, announced to the eager audience how singular this event was. “This is the first draft,” he said. There will be changes, second and third drafts. One major change will be the script’s final chapter, titled “Black Night, White Hell.” He’s re-writing that. “This is the only time you’ll see this version,” he declared. Suddenly this all seems so intimate. 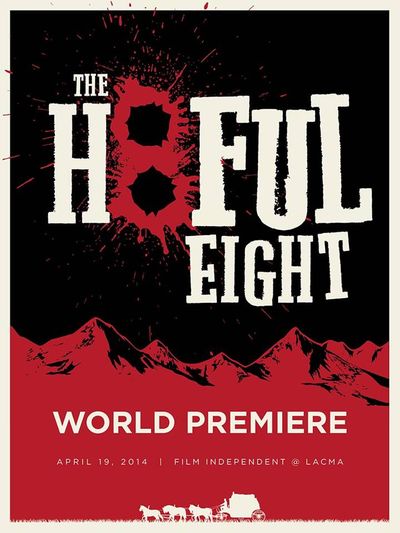 Sure, a person could have read the leaked first draft online, but sitting here on a Saturday night after walking from your downtown parking spot, leaving your cell phone in the trunk of your car and working your way through the throng of attendees who are keeping to themselves, searching for their seats or ogling others (people were so loud returning from the intermission, Tarantino had to tell them to keep it down), it’s an entirely different experience. Tarantino is in control of this read – and it’s so physical and direct. You are inside of his process. They’ve only rehearsed a few days, but they got it. The writer-director himself read from his pages, passionately imparting to us his intended camera moves, coolly raising a coffee pot for occasionally mimed pouring. And then the actors: Kurt Russell, James Parks, Amber Tamblyn, Walton Goggins, Denis Ménochet, Tim Roth, Bruce Dern, Michael Madsen, Dana Gourrier, Zoë Bell, James Remar and Sameul L. Jackson. This is exciting. 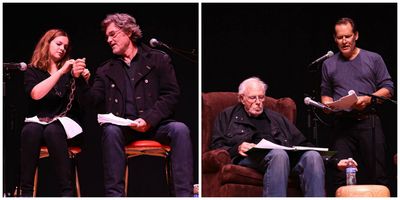 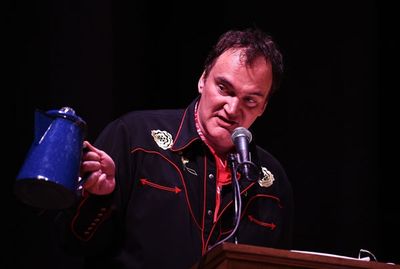 Everyone’s blizzard-bound, and, as such, stage-bound, which is interesting given the “big super CINEMASCOPE 70MM filmed gloriousness.” But who says 70 mm should be strictly David Lean or Cleopatra? And clearly the script, as read by Tarantino, utilizes wide-open spaces, flashbacks set outside the haberdashery and a stagecoach traveling through snow. And a face in 70 mm close-up can be a thing of magnificence – think Joaquin Phoenix’s injured, feral mug in Paul Thomas Anderson’s The Master. 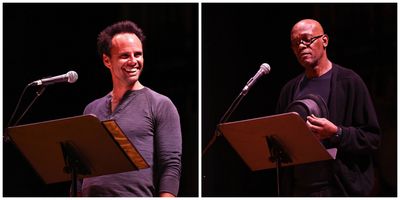 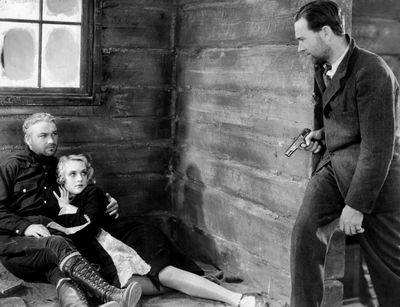 The script’s fittingly been compared to The Petrified Forest and Key Largo, and even Agatha Christie’s Ten Little Indians. I see other works in there, like Tarantino's own, Reservoir Dogs, but also confined, pressure cooker pictures like Felix Feist’s The Threat (1949), Mervyn LeRoy’s Heat Lightening (1934) and Howard Higgins' High Voltage (1929), a movie recommended to me by a friend after I described the reading to him. (QT influence by proxy). The tense High Voltage features a group of also snow-bound bus passengers stranded in a church with their driver, a female prisoner (Carole Lombard) with her lawman keeper (Owen Moore) and a mysterious man (William Boyd) already hiding out, on the lam. 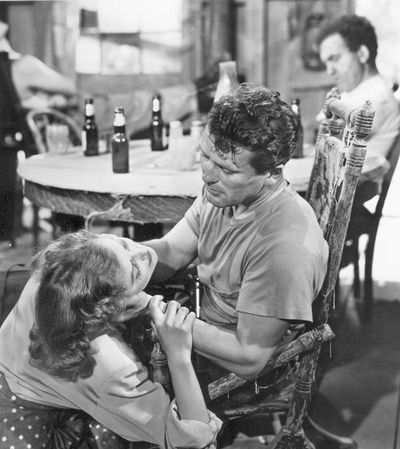 High Voltage isn't  a perfect movie, and it’s not no where near exactly like The Hateful Eight, but the snowy spirit contains some similarities, even if Lombard never, ever drops an N bomb (a word used frequently in The Hateful Eight, which QT amusedly warned the audience of the first time it's uttered). Samuel L. Jackson would have livened up High Voltage movie enormously.Thank god he exists in cinema in general, and to be the stirring Lee Van Cleef-looking centerpiece of The Hateful Eight, much like the gravel voiced Charles McGraw's inspired ferociousness in The Threat. Do not mess with these men. Ever. 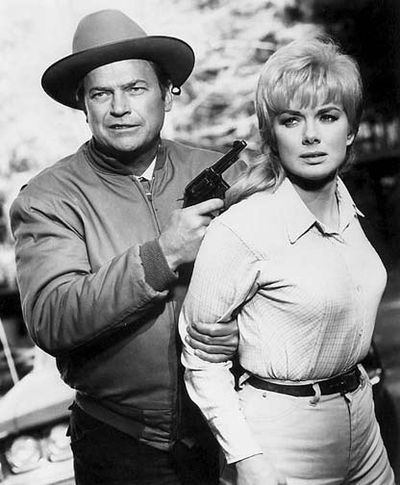 I’m not sure if Tarantino was thinking of any of these movies while writing his script (and the script is distinctly, terrifically pure Tarantino, right down to Kurt Russell instructing one to move "molasses like") but regardless, it further proves how Tarantino can drift you towards other movies, even if unintended (a wonderful thing). For instance, there’s also Burt Topper’s entertaining, down and dirty, The Devil’s 8 (which I know Tarantino admires), a 1969 AIP picture starring the diverse crew of, among others, Christopher George, Ron Rifkin, Fabian, Cliff Osmond and, my favorite, Ralph Meeker. The similarities are really in title only, but dammit,Tarantino knows a great title. 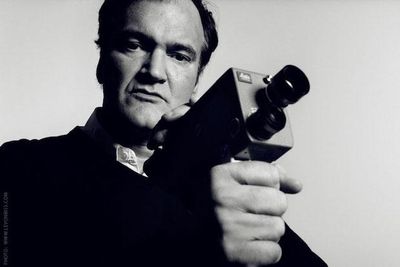 And he knows a great motion picture. We saw it read, live, on stage, now let’s see it sweat and bleed and pulsate on the big screen in, of course, “big super CINEMASCOPE 70MM filmed gloriousness,” grateful to be hateful.

And that coffee is "Strong, Hot and Good", just like Cheyenne's mother used to make.