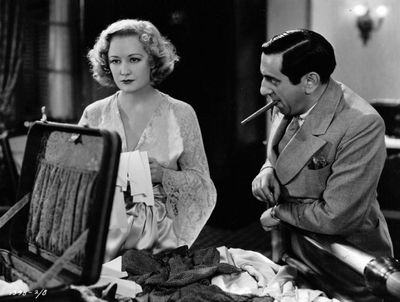 Each week, The Dissolve "designates a movie of the week for staffers and readers to watch and discuss, with a leadoff essay on Monday, a roundtable-style forum on Tuesday, and another related feature to follow."  This week, they chose Ernst Lubitsch's Trouble in Paradise and asked me to write their related feature. Here's an excerpt from my piece on the pre-Code comedies of Lubitsch. Read it all at The Dissolve. 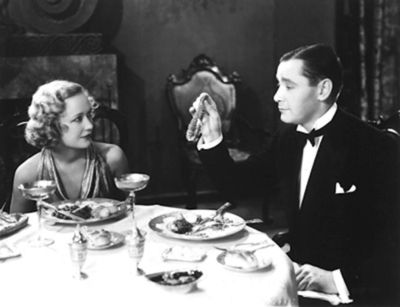 Most, possibly all, of the multiple themes of Lily’s romantic entreaty could apply to Lubitsch’s comedies made between 1929 and 1934, most co-scripted by Samson Raphaelson. (Though not his one drama of the period, 1932’s Broken Lullaby.) These movies offer not just a twist, but a twist atop a twist, and a joke atop the joke: the “superjoke,” as Billy Wilder called it. Those themes repeat: the lively, often-painful love triangle, the sexual and romantic jealousy, the thrill of sex, and in this case, the carnal kicks co-mingling with the art of stealing, an act more erotic than gold-digging. (Gold-fleecing is much more penetrating.) And then—important during one of the worst economic times in America’s history—there’s Lily and Gaston’s hard, artful work, something to respect, to take pride in.

Stealing is magical in Trouble In Paradise. Sleight of hand is more titillating than Don Juanery. (Don’t hook, darling: crook.) Prostitution is too easy, too boring—about as boring as marriage. And marriage needs to stay saucy, or who needs it? Here’s the power and thrill of pre-Code Hollywood, propelled into elegant, inventive, intelligent orbit within the luminous world of Ernst Lubitsch. 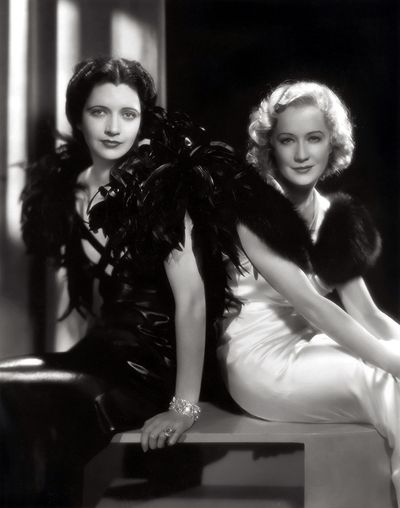 The Motion Picture Production Code was adopted under Will H. Hays in 1930, but not fully enforced until Joseph Breen got his mitts all over it. (“Pre-Breen” is a more appropriate term than “pre-Code,” Thomas Doherty writes in Pre-Code Hollywood: Sex, Immorality, And Insurrection In American Cinema 1930-1934.) Pictures were submitted for review, Trouble In Paradise among them. Lubitsch was told to remove some of the more “scandalous” lines, including “Oh, to hell with it!” But countless movies flaunted the “Don’ts” and "Be-carefuls” the Code warned filmmakers about. Just a handful of the transgressions indulged in films ranging from scrappy Warner Bros. gangster pictures to glossy MGM melodramas: criminals getting away with it, sex before marriage, adultery, drug addiction, drunkenness, mockery of matrimony, and suggestion of nudity. (Check how many times Barbara Stanwyck and Joan Blondell dress and undress in William Wellman’s Night Nurse.) 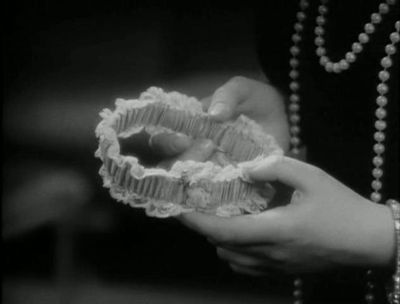 From 1929’s innovatively crafted talking musical The Love Parade (Lubitsch’s first sound picture) up to 1934’s Code-rupturing threesome in Design For Living, Lubitsch worked strictly at sophisticated Paramount. (Also released in 1934, The Merry Widow was an MGM picture.) There, he became one of the studio’s top directors, a name audiences remembered just as they would Frank Capra’s—rare for a director at the time. For a brief spell, he was even Paramount’s Head Of Production, which, according to Lubitsch biographer Scott Eyman, was possibly related to the director’s quiet turmoil once Breen took over, and Lubitsch needed to “get out of the line of censorship fire and take some time to figure out what to do.” After all, Lubitsch comedies were about sex, love, joy, and the messy human complications that come from voluptuous adventure. Breen and the Catholic Legion Of Decency held such ardors suspect, a wicked playground for lotharios and trollops. 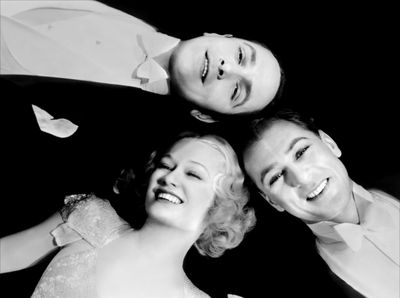 For Lubitsch, a romantic triangle or adultery wasn’t just the side story, it was often the central plot, making his pre-Breen pictures as gracefully scintillating as William Wellman’s Other Men’s Women or Dorothy Arzner’s Merrily We Go To Hell. According to the Code (as quoted from Olga J. Martin’s Hollywood Movie Commandments, quoted in Doherty’s Pre-Code Hollywood), a love triangle needed “careful handling,” especially if “marriage, the sanctity of the home, and sex morality are not to be imperiled.” Furthermore, adultery was a forbidden subject and “never a fit subject for a comedy.” Lubitsch disagreed: He found it a comedic, musical, elegant, fantastical, oh so real-life. 1932’s One Hour With You concerns both triangles and adultery, and has its own sticky history between George Cukor and Ernst Lubitsch. Originally assigned to direct One Hour With You, Cukor was doing such a frustrating job that the exacting Lubitsch took over the production, according to Eyman: “For the next six weeks, Cukor sat quietly on the set, drawing his salary, confining most of his conversation to expressions of approval after each Lubitsch-directed scene.” The result was a direction credit for Lubitsch, a lawsuit from Cukor, and a compromise with the added credit, “Assisted by George Cukor.” As Eyman wrote, “Lubitsch pictures could not be mass-produced.” 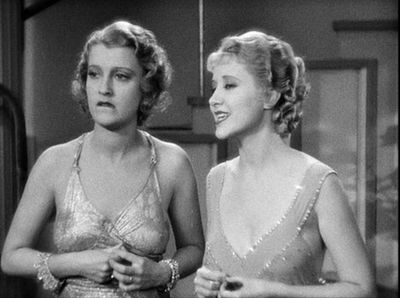 Despite the picture’s difficult production, it’s a fascinating, joyfully randy work about, yes, cheating. Colette (Jeanette MacDonald) is married to impish Andre (Maurice Chevalier), who can’t help but succumb to her horndog best friend Mitzi (Genevieve Tobin). He even sings his dilemma directly to the audience, praising his wife’s virtues while gleefully returning to the potential mistress with, “Ohhhh! That Mitzi!” When the deed is done, Andre again breaks the fourth wall and asks, in song, “What Would You Do?” inquiring of men—and, since this is Lubitsch, women, who aren’t exempt from the equation—how they would handle such a pickle: “Do you think you could resist her? Do you think you would have kissed her? Would you treat her like your sister? Come on, be honest, mister!”

Never mind that that the song explains and excuses his indiscretion; it’s so damn charming that viewers feel mischievously complicit with Andre. (I wonder how many couples gave each other the side-eye during his ode to adultery, or even a jab in the ribs.) Chevalier’s considerable Gallic delights help him get away with such things, but even us non-Chevaliers, we’re all human, we all transgress. Be honest. Grow up. Get over it. 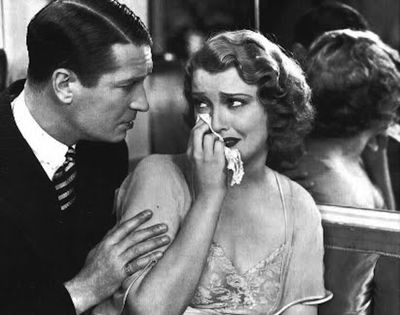 And yet Lubitsch isn’t merely flip here; he understands the pain Andre and his Mitzi have caused the distraught Colette. Even Colette’s lovesick revenge kiss with poor Charles Ruggles (which becomes another amusing Lubitsch twist on deception) is tinged with sadness. She can’t even cheat properly! And Ruggles, well, he doesn’t have a chance next to that dashing so-and-so Chevalier. Pain presents itself in all Lubitsch’s comedies, with some characters standing on the precipice of tragedy.

In 1931’s The Smiling Lieutenant, Chevalier’s Niki is forced to marry a besotted princess (Miriam Hopkins) after she mistakenly accepts his smile and wink, when in fact, he’s directing the amour to his girlfriend, beer-drinking band leader Franzi (Claudette Colbert). Stuck in an unhappy marriage with the ridiculously prim, innocent Princess Anna, Niki refuses to sleep with her, leaving her to play a sad game of checkers on the marriage bed with her blowhard father, King Adolf (a wonderful George Barbier), which is simultaneously hilarious and poignant. (The father-daughter relationship becomes increasingly touching as the movie progresses.) Franzi has tearfully left Niki with a garter to remember her by, but she later becomes his mistress, trysting with her lover while his wife putters around the palace, unfulfilled and heartbroken. This is a comedy musical? Lubitsch goes even further. Once Anna discovers the affair, she summons Franzi to the palace. (In a kinky touch, Niki has been using the police to arrest Franzi and deliver her to their rendezvous spots.) The confrontation is surprising—both women flop on the bed to blubber their eyes out. Franzi realizes Anna is no enemy and takes pity on the square, surprisingly sweet princess, teaching her how to play a jazzy piano, wear silky négligées (to the tune of “Jazz Up Your Lingerie”), and let down her prissy, pinned-back hair. The mistress instructs the wife how to properly make love to the man the mistress loves. Well, they both love him, but someone has to get their man. The princess reigns (although she’s much less self-sufficient than Jeanette MacDonald’s Queen Louise in The Love Parade, or Countess Helene Mara in Monte Carlo), and Lubitsch allows sacrificial Franzi a mournful exit with the self-defeated, undeserved line, “Girls who start with breakfast don’t usually stay for supper.” 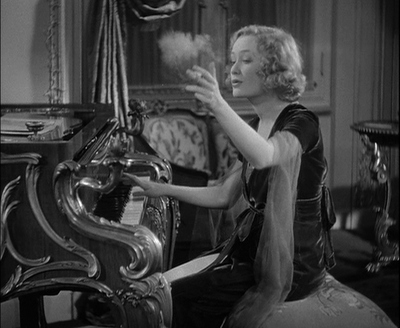 Perhaps this is a flawed, too-easy resolution to the aching triangle, but it’s also an ironic twist. It’s the aforementioned “superjoke.” With The Smiling Lieutenant, Wilder perceived the superjoke as “the wrong girl gets the man.” Some joke. And yet it works, leaving viewers with the shot of Colbert dejectedly waving from behind her back so Niki and Anna can dig into their final scenes of jazzed- and juiced-up foreplay, and finally, a whole lot of sex. Poor Franzi. It was fun while it lasted. In Trouble In Paradise, the short but memorable affair is not only fun—if that is the right word for a thing so elegant—it could have been marvelous, Gaston says. “Divine,” agrees Mme. Colet. But what can transform such smooth, dreamy sophistication into something clumpy and common? The cops. And so Mme. Colet, knowing Gaston intended to rob her but has fallen in love with her, watches him flee into the night with his other lover. She’s understanding enough to allow him to nab her pearls as a parting gift for Lily, and like Franzi in The Smiling Lieutenant, she’s left alone. Such is life. Gaston and Lily ride away in a cab, culminating their sex-as-stealing one-upsmanship, with Gaston grabbing Mme. Colet’s stealthily snatched wad and stuffing it into Lily’s purse. That purse sits on her lap, or, if one wants to be Freudian about it, between her legs.

And so the crooks get away with it. Paul Muni’s Tony Camonte and James Cagney’s Tom Powers would have been impressed, had they lived. Even they have to pay for their crimes in pre-Code films—but what spectacular endings those two were granted. Gaston and Lily aren’t gangsters or killers; they’re aristocrats incognito (the reverse of Jack Buchanan’s sweet incognito hairdresser in Lubitsch’s Monte Carlo, also released in 1931.) But they do indeed break that bendable code by making lawlessness so sumptuously attractive that pickpocketing is not only exceptionally suave, but synonymous with sex. 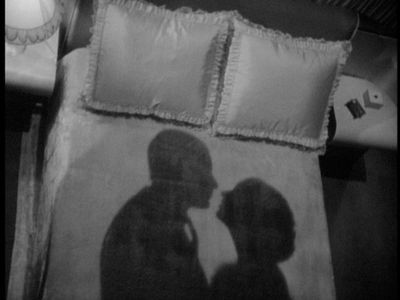 And yet within this dreamscape so graceful that it feels musical, with its fluid panning shots, meaningful use of clocks, knowing shadows on beds, superbly climbed staircases and perfectly timed edits, is a waft of Depression-era actuality. Gaston gently complains, “You have to be in the Social Register to keep out of jail. But when a man starts at the bottom and works his way up, a self-made crook, then you say, ‘Call the police! Put him behind bars! Lock him up!’” Reading that, not with Herbert Marshall’s exquisite cadence in mind, and instead with James Cagney’s rat-a-tat pugnacity—well, the two men could have shared a drink together. Marshall may have been too sophisticated, too elitist for Cagney, but he wasn’t a snob. And between the two of them, they had the streets and boudoirs covered. And even better in Lubitsch-land, in which a bit part is often allowed a big moment, they could have invited the fellow who contributes to Trouble In Paradise’s famous opening shot, the garbage-man gondolier.

Read the rest of my piece on Lubitsch's pre-Code comedies and especially their triangles, continuing with Design for Living and what may have even charmed that uptight schoolmarm Joseph Breen, The Merry Widow, at The Dissolve.