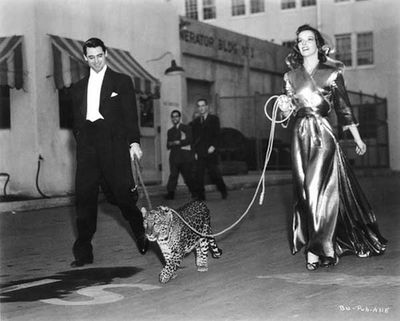 Hapy Birthday to the late, great Howard Hawks. Let's celebrate with one of his best, Bringing Up Baby. Here's my brief ode to Hepburn, Grant, bones, dogs, leopards and... "You're a fixation."

We should all miss the screwball comedy. An inspired, trenchant, romantic, witty, glamorous, sexy (so sexy) genre that went the way of telegrams, automats and men wearing fedoras without looking ridiculous, these pictures, when shifted into high gear, were funnier, racier, edgier and sometimes, exceptionally daring, more than say, anything Kate Hudson has ever tried to lose a guy in ten days over. (Apologies for dragging her into this.) And top baby is Howard Hawks' 1938 Bringing Up Baby, in which the luminous lunatics aren't relegated to amusing supporting straitjackets; they're running the asylum. That's Katharine Hepburn as Susan, an adventure-seeking, possibly insane heiress who immediately decides she's found her man after setting eyes on David, the bespectacled, uptight, also possibly insane paleontologist playd by Cary Grant. Why is she so smitten? Well, yes, he's Cary Grant, but Grant works this nervous nerd routine so beautifully that you actually wonder. And then, Hepburn! She's so maniacally, gorgeously single-minded in her approach (as you probably well remember, she manages to trap him in Connecticut with a pet leopard, a yapping dog and Grant's missing intercostal clavicle, which results in many amusing double entendre of "where's the bone?"), that she's more Marx Brother than Desperate Daniela. And who doesn't root for Harpo? Scripted by Dudley Nichols and Hagar Wilde (with some winning moments of ad lib by Grant and Hepburn) and directed by Hawks with such an energetic pace (Hawks told Peter Bogdanovich, "You get more pace if you pace the actors quickly within the frame rather than cross cutting fast"), there's so much joyful, inspiring anarchy here that the movie never grows old. It still feels remarkably modern. 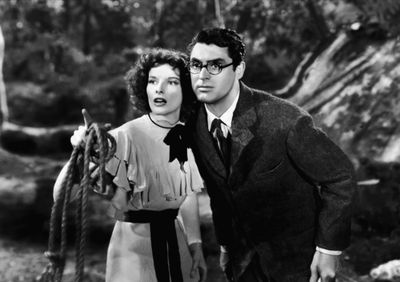 Much like Hawks' frequently comic (and yes, dark) Scarface (my favorite Hawks' picture and I think, one of the greatest American films ever made) in which Paul Muni is the front and center murderous, oddly lovable loon, Baby offers a rejection of how one should conduct oneself in supposed "regular" society, both in living lives with "dignity" (Oh, Grant and that colorless potential marriage) and how one persuasively woos a suitor (is stalking OK? It is with Kate Hepburn), that the picture remains downright radical. Both Scarface and Baby look at the American Dream, what it's supposed to represent in career and marriage, and decide they are going to create those dreams themselves, no matter how crazy. And with some powerful, deadly pets along for the ride. In Scarface it's Tony's tommy gun, in Baby it's Susan's leopard. 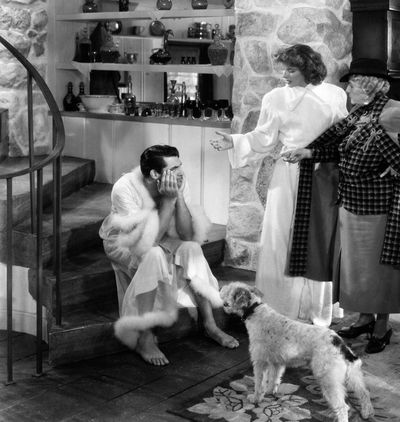 And in Baby, all side actors are tested to their limits with this dizzy duo (that's Charles Ruggles, Walter Catlett, May Robson, Fritz Feld and more) and go along (exasperated), attempt to stop but mainly, endure their tumult. And then there's the lines -- here's a famous one, perhaps the most famous: When Grant opens the door to Hepburn's perplexed Aunt Elizabeth (Robson) who demands to know why he's clad in Hepburn's frilly bathrobe, Grant jumps and memorably exclaims, "Because I just went GAY all of sudden!" To this day, that line always, always kills. 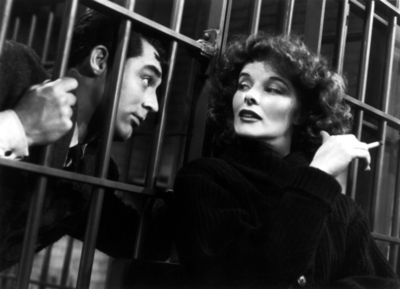 But my favorite is one that truly slid by the squares-ville production code: When Hepburn play-acting "Swinging Door Susie," a hardened ex-con who hollers out "Hey Flatfoot!" (can we lose "pig" and bring this copper slur back?), states, "I'll unbutton my puss and shoot the works." Oh, my. Wonderful. "Open up, I'll make you feel hot," she says. Indeed she does. God bless you for keeping that in there, Howard Hawks. 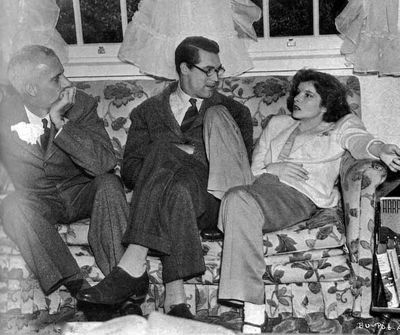 And then there's this scene. And that gown:

*From MSN Movies 100 Favorite Films in which MSN writers pick their favorites. This one made my list. Read them all here.

No many how many times I watch "Bringing Up Baby," it's never enough. If only romantic comedies of today had an iota of the wit and charm of this movie.... Thank you!