The Power of the Purse: Marnie 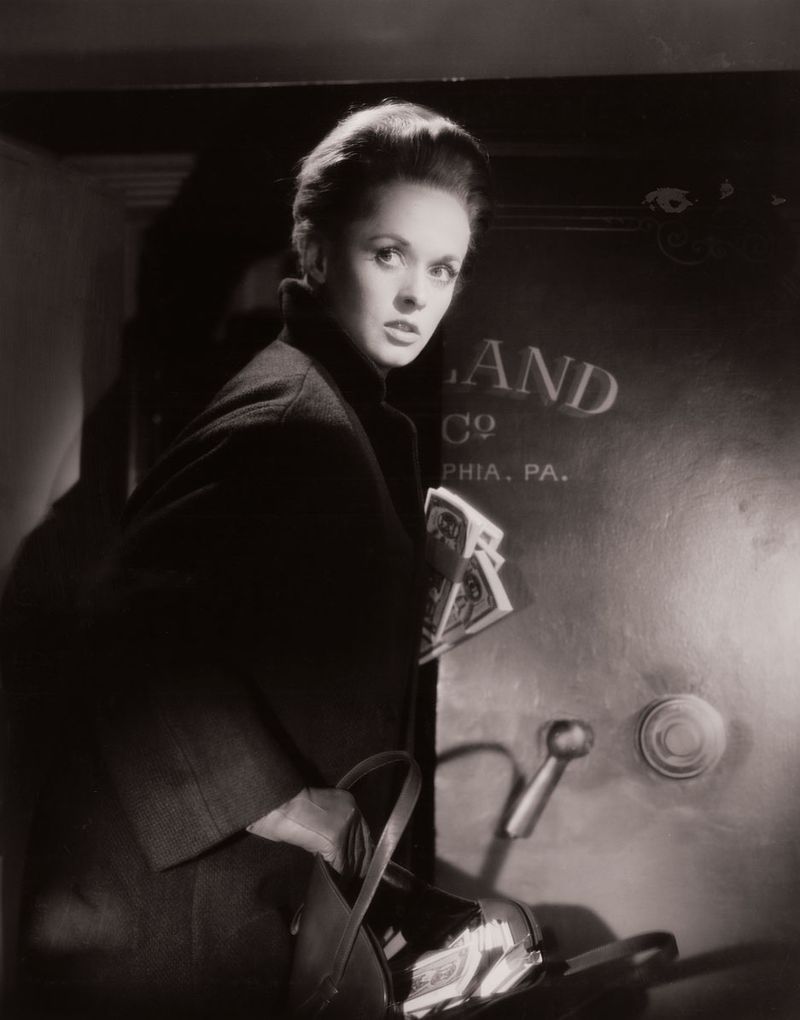 When Madonna's "Sex" was released, actor Udo Kier, who was featured prominently in some of the book's best pictures, was asked about Ms. Ciccone. What she was like? But more specifically, since Kier had ample chance to see, what was her vagina like? (A question one should probably not ask but those things were asked) Mr. Kier's answer? "Organized."

He could have been talking about Tippi Hedren's handbags in Marnie. 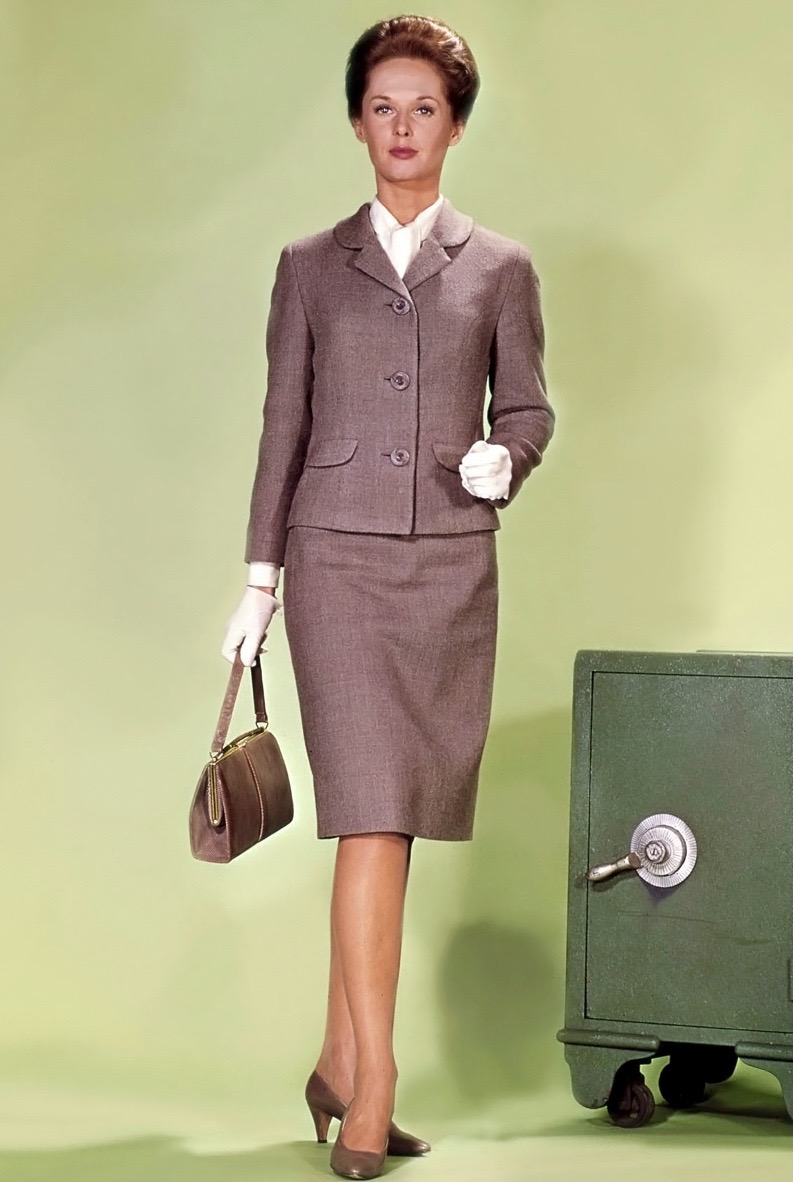 The Hitchcock handbag -- they're lovely, and fetishistic -- creamy, dreamy vaginal things. Vaginal. I don't find this a stretch. With all those crisp, snapped, soft or hard bodied rectangular satchels and muffs (sorry), Hitchcock's women clutched wombs of wonder that, like, many ladies obsessed with their handbags, seem to serve the purpose to only mystify men. Who cares so much about a damn handbag? Women do. And not just for fashion, as Hitchcock so astutely noticed, but for what Kier also so astutely pointed out. Organization. Organization in that some feel is a chaotic organ that will spill out of your satchel in messy, sticky, dysfunctional, bloody, passionate disarray. And purses, they often lose control. Or you're worried they will. Or, rather, men, are. Purses -- they are often quite efficient, even when messy. 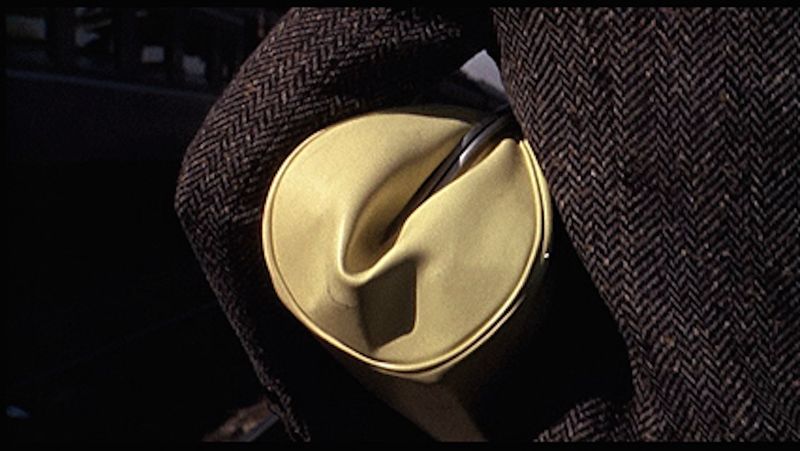 But back to Marnie, one of my favorite Hitchcock pictures, and, of all purse-filled pictures, I find her handbags, suitcases, ID cases and wallets the most intriguing. 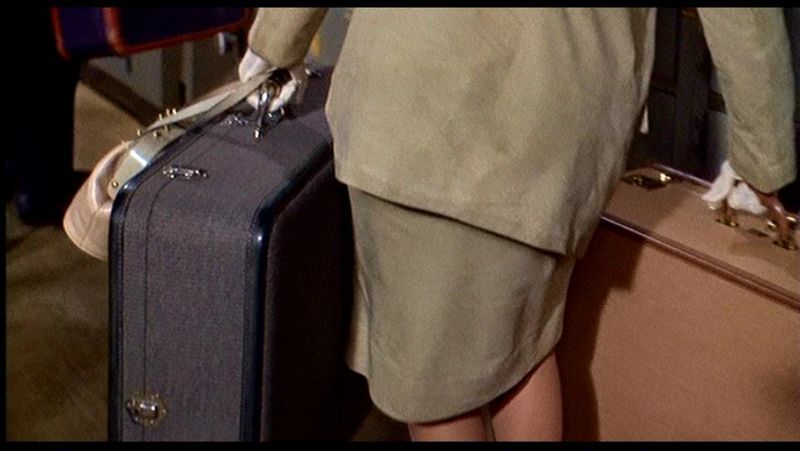 The yellow purse the raven-haired Marnie clutches while walking to the train looks (or feels?), I will say it again, vaginal. It can’t be an accident, at least I don’t want it to be -- she needs that thing. An eventual cool blonde (there are many colors), a compulsive liar and thief so traumatized by her past that her only arena for both escape and personal gain is work, she moves from city to city, nabbing jobs with her expert demeanor and skills (she is an efficient secretary) only to embezzle from employers. And dump that money in her various, vaginal bags. 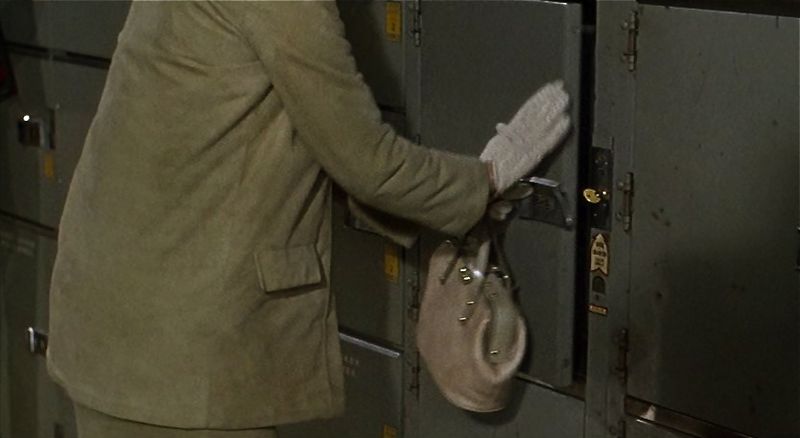 Perhaps the imprisoning Freudian arms of Mark Rutland (Sean Connery) understands a well functioning handbag. Rutland. Yes. He'll supposedly fix her. Icy, "frigid," (to him) --  a traumatized woman who can't stand the color red (of course she'll spill scarlet ink, liquid menstruation, on her white silk blouse) and one who has an unusually strong bond with her horse (saddles).

She's clearly never had a normal or healthy sexual encounter (which is very sad) and though she shows flickers of attraction and flirtation, she appears to hate men. Or maybe just all of humanity. But she does possess one heart-aching weakness -- she loves her mother to the point of masochism. 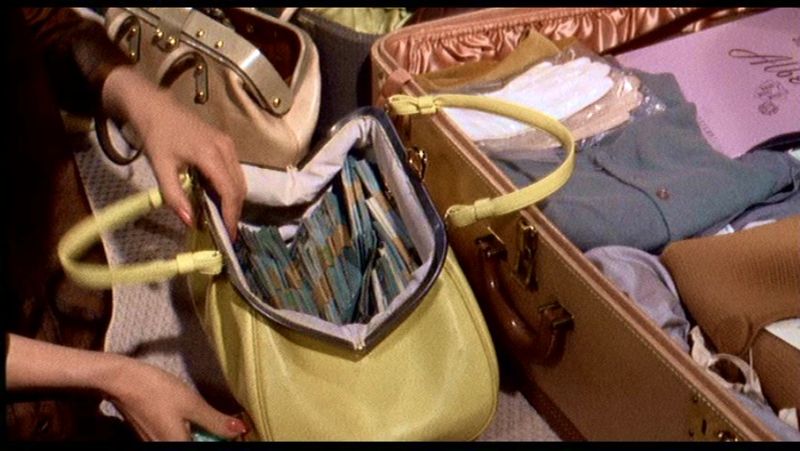 I'm not the only one who has noticed this. The controversial Camille Paglia brought up the Tippi vaginal-satchel in her BFI book on The Birds. There's also "The Women Who Knew Too Much: Hitchcock and Feminist Theory" -- author Tania Modlesk discusses other feminist takes on Hitchcock's use of purses, keys and safes. But she makes a fascinating case for Marnie, her mother and that fur wrap -- the luxurious non-utilitarian opposite of the clenched, accessory-stuffed purse. It's a sensual gift. And one her mother will reject. Modlesk writes: 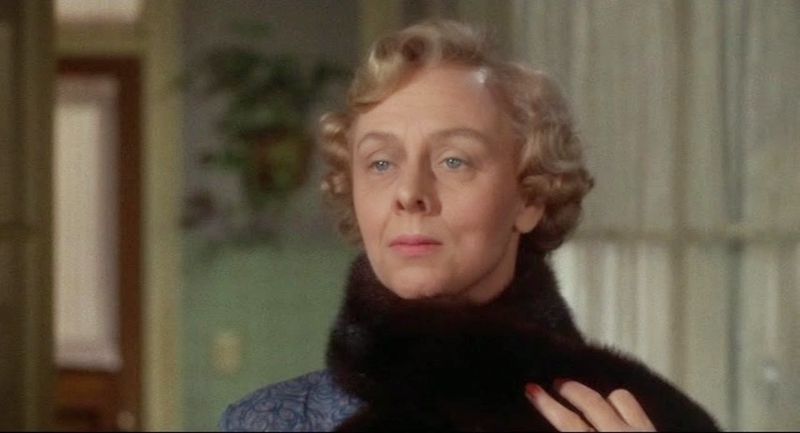 "But there is a fetish that no one to my knowledge has remarked upon, oddly enough since it is one of the most classic fetishes of all time -- the fur piece. On the first visit to her mother, Bernice, Marnie brings her this fur and wraps it around her mother's neck. A few minutes later, the fur set aside, Marnie watches with longing as Bernice combs [the young blonde girl visiting] Jessie's hair, captured in a signature shot of Hitchcock tracking into the hair at the back of the head, evoking desire and longing on the part of the one who looks [Marnie is the one looking]... Jessie leaves the house, and Marnie immediately places the fur around her mother's neck. Shortly thereafter the two go into the kitchen (to make 'Jessie's pie')..." Jessie's pie. Well, that leads to a jealous argument. And Bernice admonishes her daughter with the potent demand, "Mind the drippings, Marnie." What a muddled household. Not unkempt, just mentally untidy. Brushing Jessie's hair and minding Jessie's pie are more important than stroking that sweet furry piece. And worse, her mother (an ex-prostitute), remarks that Marnie's hair is, well, whoreish: "Too-blonde hair always looks like a woman's trying to attract a man." Never mind her mother's hair is also quite light. Marnie needs to get out of there. It's time for her to change identities (Marnie Edgar/Margaret Edgar/Peggy Nicholson/Mary Taylor) and stash more jack in her pocketbook. 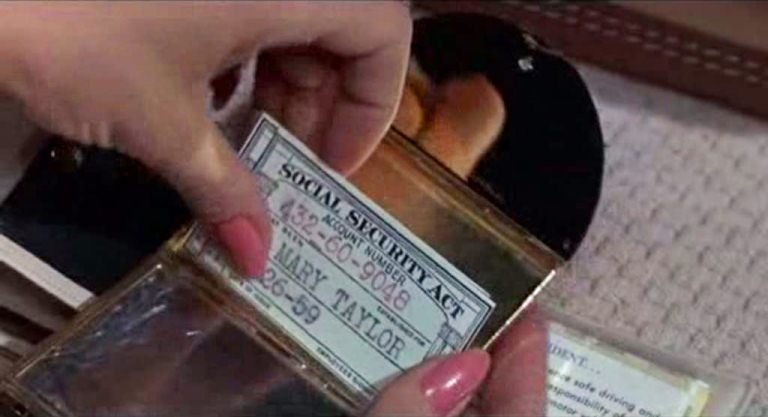 However, it's only a matter of time when Mark Rutland will supposedly figure her out. Here come the man readying to shake that pocketbook and empty the thing out, stick his hands inside, figure out her secrets, lies and perhaps the red-lipstick-sex within. Most women don't like it when you open up their very personal purses without asking (you think Catherine Deneuve wants you to spy the dead rabbit she's carrying in her Repulsion reticule?) and Marnie would be no exception. 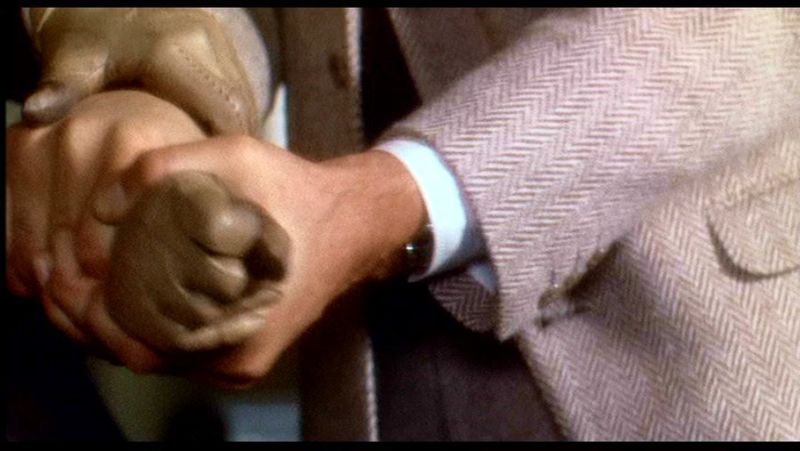 Gripping and grabbing her soft flesh, he'll take apart her clutches. (And it's not nice -- at all -- as we will see) These were vaginal satchels more than likely approved by Hitchcock but chosen by costumer Edith Head. Certainly Ms. Head understood the power of the purse. The male Hitchcock and the female Head (these names are just too much) must have enjoyed penetrating their pursey mystery and allure. 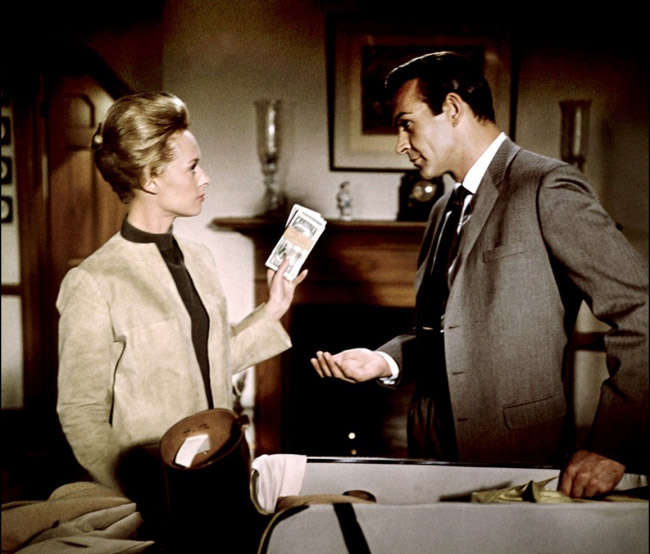 Though Mark's the romantic lead, he's a pervert himself, a very troubling person, and maybe not the healthiest partner for this wounded woman. And yet, he is trying to understand her, albeit in often terrible ways. The movie is sympathetic towards understandably troubled Marnie, making it tough to blame the woman for her antisocial tendencies. In her experience, men (people) are beasts who've only done her harm (flashback to a very young Bruce Dern freaking out a very young Marnie). The world is a cold-hearted place and she finds no solace at home, no father and no maternal warmth. 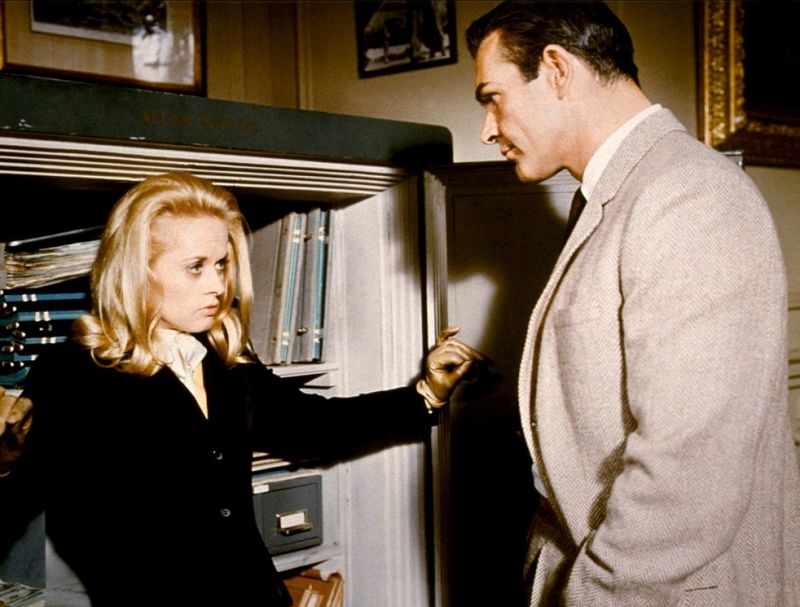 In return, she violates the world (men) by lying, cheating and stealing without ever giving them the full pleasure of her body (and how can blame her?). There are moments (of which I can do nothing, this is Hitchcock filling the controlled receptacle) when I think Marnie should just flee Mark, everyone, in fact, and ride her horse Forio ("Oh, Forio, if you want to bite somebody, bite me!") and push her remaining pleasure into her sex-repressed satchels. 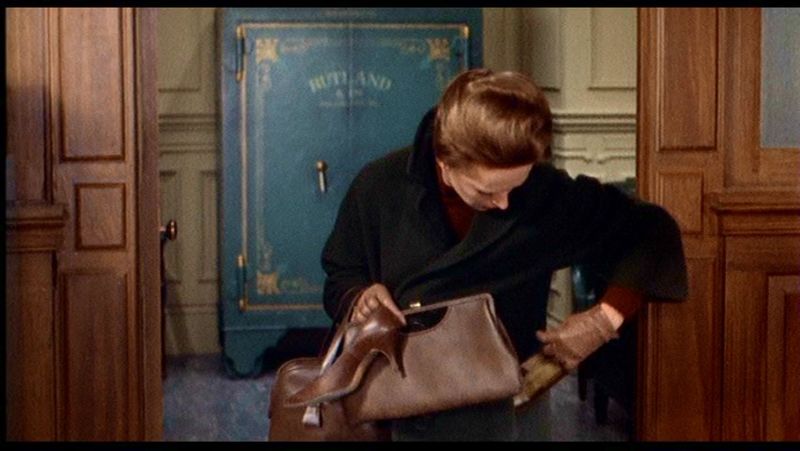 She may move on to something better, something more loving. Like pretty, organized purses and their vaginal sisters, there is such a thing as productive, controlled chaos. So, sister Marnie? Embrace the pussy riot. 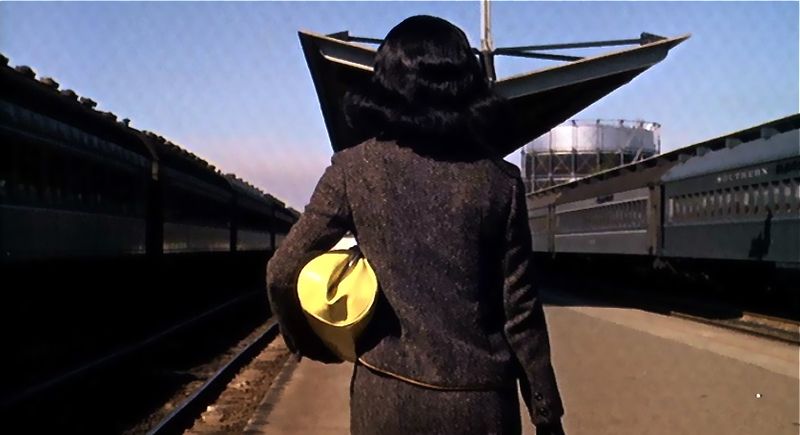 One of these days I'm gonna get organizized. Behold the power of the muff.

Why stop with Hitchcock and Head? How about the name Rutland? A dirty mind is a terrible thing to waste.

Ah, the money shot in that clip--cathartic. Purses--my favorite consumer items (next to books and art supplies). It used to be shoes, but I've aged into handbags. Interesting. Hitchcock was into that too, as you've pointed out so well.