You Wander Down the Lane and Far Away 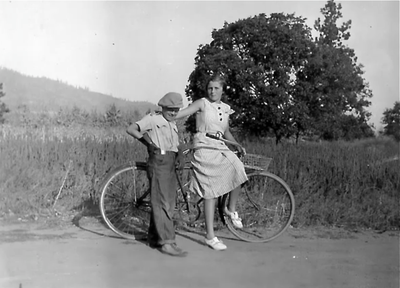 I finally saw a picture. Little Dorothy Gentry -- the girl who grew up on an orchard in Oregon's Rogue River Valley. The woman I barely knew while growing up in Seattle, Bainbridge Island and Oregon's Willamette Valley. As I wrote and experienced last month, the woman who went to Alaska and who passed away this October.

When Dorothy died, I discussed the scant photos I'd seen of Dorothy and her family -- her mother and my mother. There were only two pictures I could remember, and one I didn't see in this collection. Maybe I imagined that picture?

But for the first time in my life, this week, I saw less than a dozen old pictures. I looked at my great-grandmother Ethel for the first time in my life. I saw Dorothy as a baby, as a girl and as a 13-year-old, sitting on her bicycle, appearing almost protective with a boy I'd never seen before. I saw their house. I saw Dorothy's friends. I saw Dorothy as a young mother with her brood. I saw my little mother. I saw my aunts and uncles as children. It all looked so stark and questionably happy and beautiful. Nature and growth unfolding around these people, little people, they seem, with enormous problems to face in their futures. The orchards seem protective. Or a trap. I'm not certain. 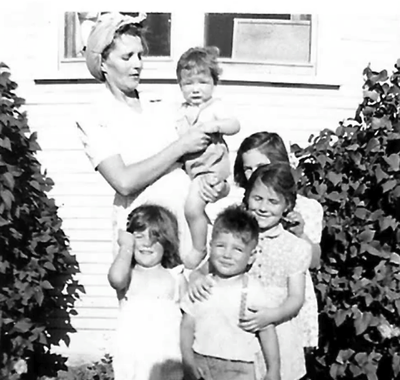 Grandparents leave us -- and often we have no idea who our family really are. And we'll never know. Dorothy and her kin, her entire life, haunt me. I've always felt rootless, yearning to understand my blood ties, where they came from and what kind of people they were. I heard bits and pieces of ancestral drama and tragedy (abandonment, prison, mental institutions) but only through my mother, and from what she could piece together. It was a mystery and It seems everyone wanted to keep it that way.

Dorothy was not the matriarch to discuss her past. As far as I know, she rarely talked about her mother, she rarely discussed her first husband, who fled the family and eventually went to prison (Dorothy married several times -- one died in a barroom brawl, another was a pharmacist, I don't know who the others were). After ditching his family, my grandfather lived, for a time, with this family on an orchard, and my mom was hungry all the time. The kids would try to run over there to eat fruit -- but they'd be shooed off the property. And then he was sent away -- he spent time in prison with his brother, my grandfather was there for grand theft, something like that, his brother was there for murder. Only a few days ago did I learn Dorothy had a younger brother. My mother told me. His name was Bobby, like my brother. Dorothy's Bobby, sometime in his early thirties, was killed by a drunk driver. Bobby is the boy, standing with his big sister next to the bike. He's wearing a hat. He  liked hats. And I like to think that his mother Ethel was happy to see him in hats. She liked them too. 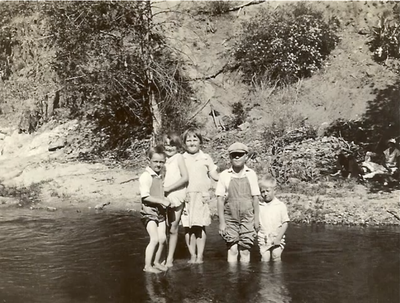 That's half of what I glean from these mysterious, first-seen photographs. There's so much I don't know. I should have asked more questions -- but I never felt I could. I rarely saw Dorothy to ask, and the few letters were about happy things -- flowers, books, movies. I worried that her past would only bring sadness. Though I'm sure there was joy and some wonderful stories, I didn't want to dredge up painful memories. Chiefly, about my great-grandmother Ethel, who was sent to The Oregon State mental institution at about age 28 or 29, when Dorothy was a young girl and remained interned until her death. When I was a little girl, my mother took us out to visit Ethel -- I barely remember. We stopped to eat hamburgers and everyone seemed happy, happy with a question mark. There was a cold pall that would hang over the meeting. She had to go back. I was too young to understand her mental state, but according to my mother, she was not crazy. She'd been through horrors at that institution (I can only imagine what kind of treatments occurred during that time in Salem, the real Cuckoo's Nest, where they filmed the movie.) and that was her life. She was used to it now. "Normal" life, she felt, was too late. She could not re-enter regular society. And she didn't want to leave. Real life was now too frightening? I thought of Ethel first arriving, packing up her suitcase and walking into that place, barely 30 years old. From vast fruit-filled orchards, biting into sweet things, feeling the sun and the rain, to white walls and white starched nurses and cups of pills -- Ethel looking out at the sun and the rain, only being allowed to feel it on her pretty hair and pretty face in designated, organized outings. 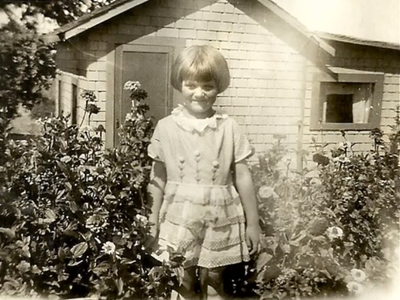 She should never have been locked away. From all I've heard, she suffered anxiety, and she likely received horrific treatments during that dark time of mental health institutions. She was misdiagnosed. I was always fascinated by her. I remember, at around age ten or so, discovering her old, snazzy suitcase in a closet after she died. I went through her carefully folded clothes and noticed her name "Ethel Gentry" marked on all of her garments. Maybe this was the institutional rule. Maybe she didn't want people touching her pretty things. I knew she'd feel fine if I did. I put on her fancy nightgown and wandered around the house. I went into the kitchen and filled a highball with soda and ice and pretended it was liquor. I thought this was something she would do, sexily swill a drink --  something I saw in old movies. I staggered around, pretending to be angry and drunk but thinking I was so crazy glamorous. I imagined this was how Ethel might have conducted herself towards all those jerks and orderlies in the loony bin. Movie Star. (Ethel's mother was a dressmaker and a costumer for the movies. Ethel was born in California. Her father died in Los Angeles. I just learned all of this today). Well, now my play-acting makes more sense, even if I had no idea at the time. But I doubt she was treated like a movie star. 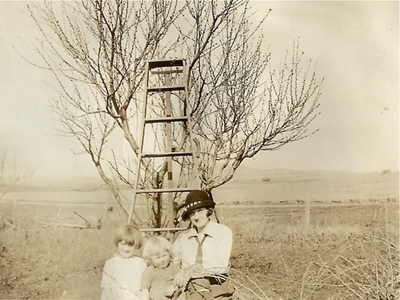 Ethel has never been clear to me. I don't know what happened to her. Those times, especially for women suffering depression and anxiety, were obviously different when Ethel was a young woman. My great grandfather McKinley (he went by Kim), who I do remember vaguely as a little girl, I only saw him about three times (I have a memory of picking cherries with him, eating so many on the drive back home that all of us kids swore off cherries forever) -- I adored him.  But I've never understood why he agreed to send Ethel away. Was she dangerous? Did she want to go? I can't believe that. She was acting odd, is all I've heard. Odd. In these photos, she looks what has been described to me -- unique, smart, stylish, musical (she played piano beautifully) -- an interesting woman. There she is. Fantastic. Sitting with her children, a tree and a ladder, clad in menswear complete with a fabulous hat and tie. And, in another photo, lovely in her silky shirt, bobbed hair and long necklace. But I have no idea what was really going on during this period. If I romanticize her, I say she was a woman ahead of her time, a woman who spoke her mind  -- a woman who could not be contained. But then, this is nothing new. Women are still demonized, written off as crazy, blamed for other's problems. She was a "problem." So, remove her. 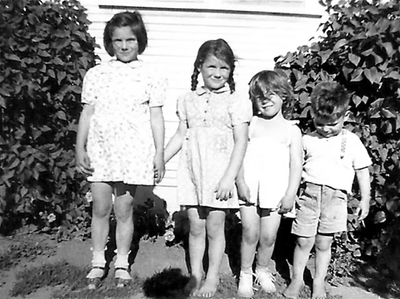 I've written about how we view images in pictures and in movies, sometimes as time-capsules, and looking at these photos reminded me of how I took in The Virgin Suicides -- how those memories, by the boys who never really knew those girls, unfolded in their minds. I feel my blood when I look at these photos, but as I've stated before, recollections never play out in fully developed narrative timeframes, as perfectly balanced and structured strands of thought. As I reflected, they are not tangible, easily understood events. Memories can be visited but never wholly embraced. They can be strong and unforgettable, but bit by bit, they lose their edges, making them, for many, even more melancholic. The more they elude us, the less simplistic they become -- never just happy or sad, but mysterious and bittersweet, replete with or bereft of emotion for reasons often beyond comprehension. 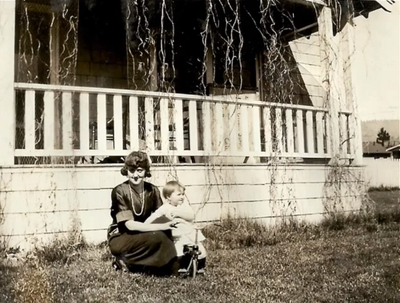 I'm trying to comprehend. And I certainly feel things. I feel nearly overwhelmed, in fact, looking at these photos for the first time. And I think of Dorothy, the little girl who lost her mother, her husband and then her brother. She was not a perfect mother. She should not have left for the wild frontier of Alaska, almost unreachable, so early in my mother's life -- leaving my teenage mother alone to watch over her younger brothers. But now, even as I feel anger for her leaving my young mom and two boys, I better understand her need to flee, as selfish as it was to her kids. She wanted to start her life all over again. The men leave. The mothers are sent away. Her mother, confined and creative and lovely, undergoing god knows what, could not run away. Dorothy could.