On the Road with The Hitch-Hiker 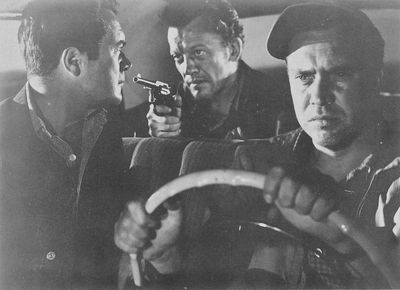 I'm on a road trip to LA and spent my birthday in Fargo, North Dakota. Turned on the motel TV upon waking and saw *these* fantastic mugs: O'Brien, Lovejoy and Talman in Ida Lupino's 'The Hitch-Hiker.' Now *that* was a present. And perfect for the long drive ahead. Well, maybe not. I won't be picking up any Talmans along the way... 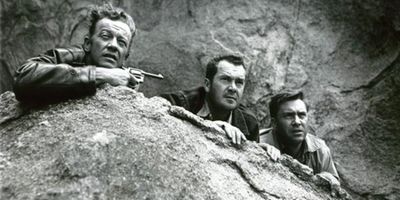 In the 1930s and '40s, the great Ida Lupino earned deserved esteem as an actress with her tough, sensitive performances in movies like High Sierra, They Drive by Night, Moontide and one of my favorites (among so many more) Road House, and would continue her talents into the 1950s with The Big Knife, While the City Sleeps and the searing yet roughly romantic Nicholas Ray masterpiece On Dangerous Ground. 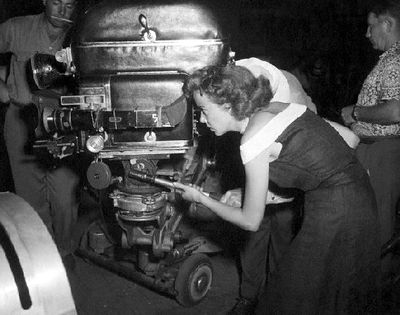 But the intelligent, unique and creative actress spent time studying the mechanics behind the camera, resulting in forming (with her then husband Collier Young) the independent company The Filmakers, where Lupino would eventually work as producer, director and screenwriter on many fascinating pictures. Lupino's  first directing job came with the 1949 picture Not Wanted (for her company The Filmmakers), taking over for director Elmer Clifton after his heart attack. In 1950 she made Outrage, a thoughtful, emotional B-thriller that took on the controversial subject of rape -- and not so easily. She made you think when audiences could have simply gotten an exploitative kick from the then saucy subject matter. Throughout her career as a director, Lupino would continue to approach taboo subjects with sensitivity and grit (The Bigamist is another interesting standout I love and have written about a few times), but, for me, her greatest film is the intriguing psychodrama The Hitch-Hiker, starring Edmond O'Brien, Frank Lovejoy and a bug-eyed, wonderfully insane William Talman. 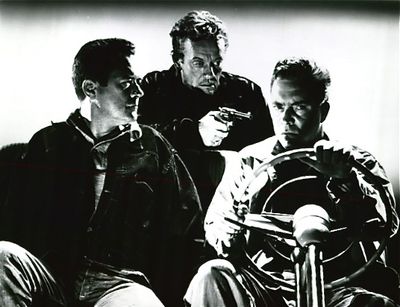 Chronicling a horrifying road trip in which two fishermen (O'Brien and Lovejoy -- both such underrated, interesting actors with such well upholstered faces) pick up a deranged hitchhiker (Talman, another force), Lupino directs with shadowy menace and intense nervousness (mirroring postwar anxiety) in this tight character study/thriller. Thanks to Lupino at the helm, that back-seat driver of a panic attack Talman pointing that gun and the artistry of cinematographer Nicholas Musuraca, this movie is truly scary. And man, these are some faces she's directing -- you can barely stand watching poor Lovejoy and O'Brien endure this nightmare and yet, I feel like I could look at their mugs for hours. 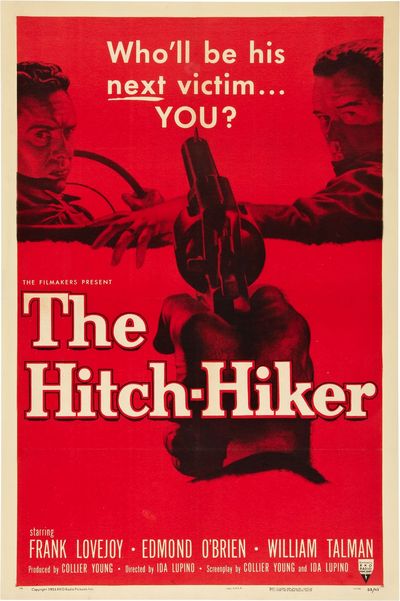 Yes indeed, before Kathryn Bigelow, women could direct hard boiled so called "men's pictures" that were uncompromising and frightening. And she well understood women too -- Lupino understood people, and people in dire straights. And yet she remained humble about her status and talents. She called herself the "Poor man's Don Siegel," and was dubbed the "Queen of the B's" and enjoyed a solid career (especially for a female director), making a string of fiercely independent, entertaining, thought-provoking pictures that stand the test of time. Thankfully many have now sung her praises (including Martin Scorsese) and books have been published about her, citing her influence, distinct style and cinematic bravery. She's more than a B, but she's certainly a Queen -- a tough queen of her own kind. And a female director every woman (and man) working in the business should study and revere.

And here are the pictures from my road trip. Seven states in three days:

Love this film even though William Talman showed up in my nightmares for months after viewing it. And I agree, this is probably Lupino's best work as director.

William Talman still scares the hell out of me in "The Hitch-Hiker." But if you were a kid in the 1950s, you also remember him as D.A. Hamilton Burger on Perry Mason. I also can remember Ida Lupino as the only female, among the four revolving stars of Four Star Playhouse, 1952-56 with David Niven, Charles Boyer and Dick Powell. But Frank Lovejoy was my big favorite as a private eye in the too short-lived Meet McGraw of the late 1950s. How I wish I could find it on DVD with its beautiful use of "One For My Baby" by Arlen and Mercer as a theme. Lovejoy left us too soon. I think he was only 50 when he died of a heart attack at his NYC home while doing Gore Vidal's "The Best Man"on stage in New Jersey.

Thanks for singing the praises of the wondeful Ida Lupino, my fav noir actress, and I ain't just blowin' smoke. I love THE HITCH-HIKER, one of the original "psychos on the open road movies", as I have dubbed these glorious potboilers. I also appreciate the identification of ON DANGEROUS GROUND, one of my very favorite unsung noir mini-masterpieces. A poor man's Don Siegel, a very rich woman in deed.

Ida Lupino is terrific. I hadn't realized that she had such a extensive television directing career as well. I will always think of her in her bitter sweet performance in Peckinpah's Junior Bonner.

Not to long ago I saw The Hitch-Hiker and really loved it, but like the film The Set-Up they both seem to portray protagonists that don't really deserve what is happening to them. I wrote an email to Richard Edwards who among many things co-hosts the "Out of the Past" Podcast an excellent resource for anyone looking for more understanding of the great noir films. I don't think the Professor would mind my reprinting his great response to my question.

Thanks for listening to Out of the Past! And thanks for a 5 star review at iTunes. Much appreciated!

Regarding your question about style vs. theme in the noir universe, many of the most famous films noir focus on a fateful mistake by a lead male protagonist (think about a film like The Killers or Out of the Past). But noir, like any cinematic storytelling milieu, has many rich veins and potential directions. In films like The Set-Up and The Hitch-hiker the male leads might not done anything to deserve their fates, but they are living inside a noir universe that doesn't play fair. In the post-war period, the goal-oriented protagonist himself is being called into question, since goals themselves are being questioned. A prizefighter, in a noir universe, is fighting for more than just a victory in the ring, and that fight will involve a punishing and indifferent world that can rear up its ugly head and knock down a champ like Stoker more than any flesh-and-blood opponent in the ring. Similarly in The Hitch-hiker, why these two men are singled out begins to address the pervasiveness and randomness of crime in the post-war period. Evil will begin appearing where it is least expected, and this is the outcome of a world-weariness emanating from the destructive impulses of world wars, the atomic bomb, and the burgeoning cold war tensions. Filmmakers working in the noir style embrace the bleakness of the post-war period and try to avoid sugar-coating the truth. So in my opinion, those themes are still present in the films you mention.

Hope this helps. And if you want to keep up with the latest on our projects, please follow us on Facebook at Noircast.

Best, Richard Edwards
Co-Host: Out of the Past: Investigating Film Noir """