Lynch & Los Angeles: This is the Girl 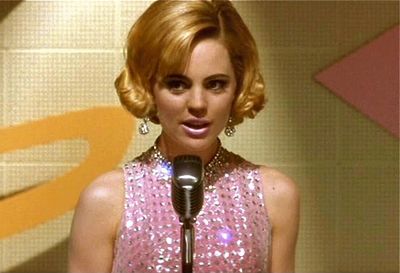 Because today is David Lynch's birthday. And because I adore Los Angeles in all of its sunny/dark schizophrenic glory. It's the one city where I feel like it's OK to feel insane. And that makes me feel sane.

I'm in Paris for a few months, which is wonderful and will offer many creative adventures (chiefly the project I'm working on). And, of course, it's a place of countless complexities, high and low, deeply historical, cinematic, literary and on and on. And it's one of the most beautiful cities in the world. Still, I'm always happy to return to ugly/gorgeous, happy/sad, winning/desperate, crazy, crazy, crazy Los Angeles. 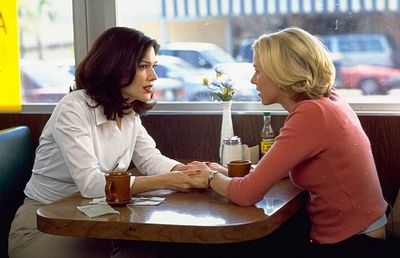 Like James Ellroy wrote regarding his return to L.A. (and in reference to W.H. Auden) Ellroy's beloved L.A. is "The Great Right Place." Sayeth Ellroy: "As L.A. bids pundits to spin epigrams. W.H. Auden called L.A. 'The Great Wrong Place.' I'll ascribe intent. Auden saw L.A. as a lodestone for opportunists and psychically maimed misfits. I sense this because I fall into both categories. Auden couched L.A. in a film-noir construction. Losers migrated here to start over and become someone else. L.A. was a magnet for lives in desperate duress. The sheer indifference of the place consumed the migrants and drove them mad. They succumbed to madness in a sexy locale. The place itself provided solace and recompense. They had the comfort of other arriviste losers. They entered the L.A. spiritus mundi. They handed out their head shots. They joined that unique L.A. casting call."

He could have been describing Lynch's ultimate L.A. movie: Mulholland Dr.

So, with that, a re-post. And again, Happy Birthday Mr. Lynch.

David Lynch gets America. America the beautiful, America the bizarre. We can discuss how "weird" he is, how inscrutable his movies can be, how much he loves oddly conceived babies, oddly shaped humans, oddly pale-faced Robert Blake, oddly obsessed Crispin Glover and his "lunch!", but the man gets what drives our subconscious, our sweet dreams, our nightmares.

So naturally, Lynch understands one of the oddest cities on earth -- Los Angeles. With his brilliant, labyrinthine Mulholland Dr., a movie that started out like a jilted starlet (it was an axed TV pilot) he digs underneath our peculiar Hollywood system -- a system that pedals dreams, desire, sex, money, magic -- dreams that have the ability to spread like a celluloid sickness all over America (especially during the 2000’s. Did he know how prescient he was going to be?). Through the bright-eyes of innocent Betty (Naomi Watts, in a career defining performance), a starlet seeking fame in La La land, he presents a twisted, romantic, funny, terrifying and deeply emotional mystery involving a gorgeous amnesiac, a monster behind a diner, a persona altering box, a pair of elderly folks who slither under doors, and a director who answers to a dwarf, a mobster and a cowboy. And let’s not forget Coco. 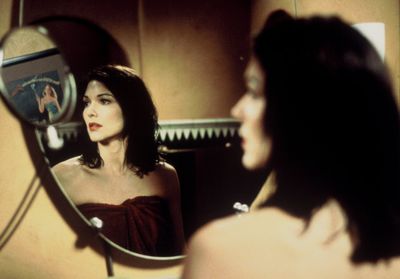 Hauntingly beautiful, poignant, funny, subversive, dark, meditative, sexual (Lynch is one of the few American directors who can actually create inspired, erotic and yet intensely emotional sex scenes) and more, Mulholland Dr. poses many questions, but offers few answers, reflecting life in all of its enigmatic complexities. And if you think it’s weird that a box might be responsible for transforming a promising young actress into a suicidal starlet, rubbing herself in a tragic masturbatorial rage, then you need to spend a little more time in Los Angeles. Or on reality television. Or in your girlfriend’s living room after you ditch her. Or in a director’s chair. Or simply walking up and down Hollywood Blvd. between Western and Normandie.

Speaking personally, I can say that living in this city long enough, Mulholland Dr. does not seem that out of the ordinary. And this realization came to me quickly. Directly upon moving here, the very first apartment I looked at, (recommended to me at the noodle joint across from Jumbo’s Clown Room at 2 AM by a weathered, drunk L.A. native waxing nostalgic about seeing Patty Duke perform her mournful "Don't Just Stand There" on Shindig!) was, unbeknownst to me, that very same apartment Ms. Watts inhabited as sad, suicidal Diane. I’ll never forget the creepy familiarity while walking through the grounds, searching for a landlord and knocking on a stranger’s door only to be answered by a stern faced woman who treated me like a suspicious intruder. A lovely place, but, when it hit me just where I was standing, I resisted a possible rental application. I realize it’s only a movie but, no. Living there seemed tantamount to beginning my new life in Roman Polanski’s digs from The Tenant.

That’s how powerful the picture is -- it just gets under your skin and into your bones and bubbles with your blood. It may be notoriously tough to decipher, but truly, Lynch captures the city, its vibe, its ragged romanticism, its cruelty, its impenetrable dysfunction and its absurdity (Billy Ray Cyrus is the pool cleaner. And that makes perfect sense) with his distinct brand of warped clarity. Our country’s often freakish, surreal desperation to emulate or ponder the “glamour” of Hollywood is just as weird and just as affecting and just as relatable as...Winkie’s dream. Mulholland Dr. is a masterpiece. “This is the girl” indeed.