Home Archives Profile Subscribe
D Is for Dietrich: Marlene's ABC
It's A Thin Line: My Summer of Love

Greatest Teen Movie Ever? Over the Edge 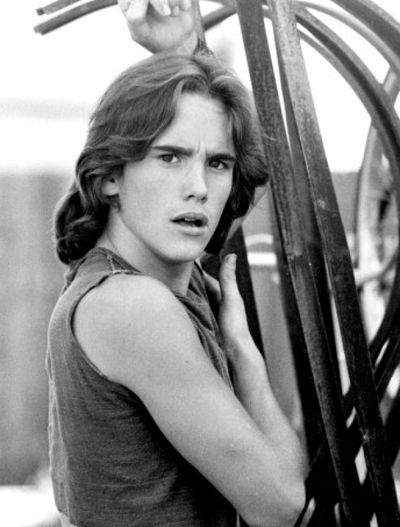 "A kid who tells on another kid is a dead kid."

The Cheap Trick songs get me every time. And Matt Dillon. And Vincent Spano. And that sterile town. And walking home at dark, drinking, at too-young-of-an age (13, in my case, staying out all night). And experimenting -- too much. And teachers either trying too hard or giving up. And all those frustrated ex hippie, now working stiff parents. 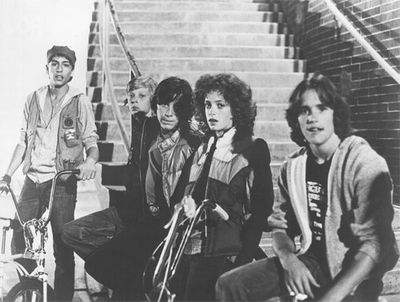 That's Over the Edge, a movie Richard Linklater once told me in an interview was most influential on him -- both of the "Edge" films, he claimed  -- River's Edge and Over the Edge (not surprising since Tim Hunter co-wrote Over the Edge and directed River's Edge). It's influential for a lot of viewers, filmmakers or not, and a movie that sticks with a person once they've experienced (and personally remember) its party-in-the-basement wistfulness. Is it the greatest teen movie? I'm not sure, though it would make the top ten, easily. Directed by Jonathan Kaplan, this teen classic has slowly been getting its due (Criterion? This would be a worthwhile release). I first saw it on TV as a young one and it never left me, for Over the Edge is not only one of the most realistic movies about teenage rebellion, but also one of the most artful (the music, from Cheap Trick to Van Halen to The Ramones is the perfect rejoice/rebel soundtrack, like the horomones surging through our teen bodies; and the score, by Kaplan's father, Sol Kaplan, is powerfully haunting). It's also a scathing indictment against some of the more ill advised methods of urban planning -- which someone needed to address -- especially in regard to the teens both stumbling around and defiantly strutting through those barren landscapes. 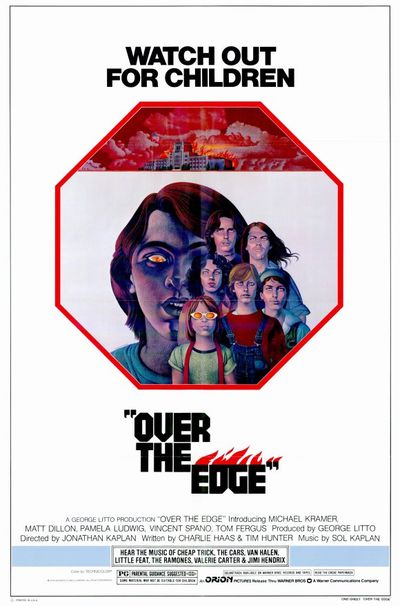 If you ever felt the trauma of moving or witnessed the growth of strip malls (I think most Americans know and at this point, sadly, accept this Shivers-esque horror, even without re-locating), you'll understand the angst of these kids. Rebellion via drinking, drugs, not minding the folks, goofing off at school, fighting and make-out sessions isn't anything new, but in Over the Edge, it digs into the realistic fun of it (because that stuff is fun when you're a teen). 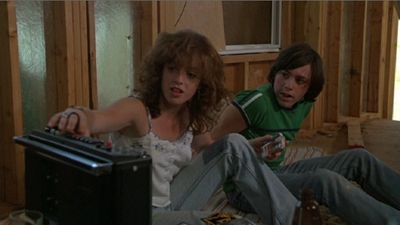 When Carl (Michael Eric Kramer) falls in love with Cory (Pamela Ludwig), it's touching, even gentle. And the excitement he feels watching her wave a gun around to Cheap Trick would impress most young boys -- even if the gun goes off. It's not all sweet, of course, there's the dangers -- due mostly to overzealous cops. And then the kids start destroying things. 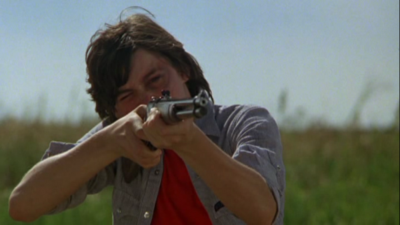 The story has young Carl (Kramer) moving to an ugly subdivision called New Granada (somewhere in the Southwestern United States) where kids are doing what they do best when bored, alienated and disgusted: rebelling. Smoking dope, carrying switchblades, fighting, dropping LSD in class (one of the film's funnier moments), these kids aren't acting out simply because they're thoughtless, they are in fact, deeply unhappy with how antiseptic life is turning out. New Granada is a shit-hole, a place where even the nice houses look like you could put your fist through a wall, and their varied families (Carl's appears liberal, which underscores the frustration going on with his sell-out, though sympathetic parents) seem to be kidding themselves. It's a depressing place, a depressing new world and the teens are the only ones who can truly verbalize (or act upon) this ... depression. 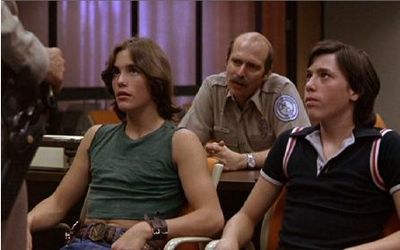 Kaplan completely gets why kids need to find an alternate world within their loathsome planned community, even if it's a destructive one. And I don't want to give anything away -- but -- it does get destructive. The parents will find themselves trapped, even as some find themselves defending their kids (after all these are kids -- Carl's only 14). And even if the kids trash the entire school -- which is a spectacular moment and one I doubt could be attempted today -- you do feel for them. 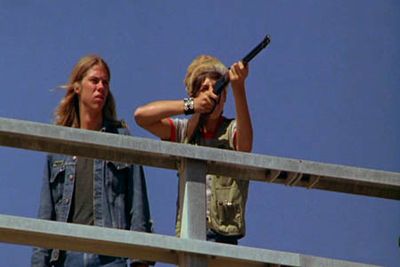 This was before internet, cell phones, Facebook, Twitter and yes indeed, kids still could connect, could find a lot of things to do -- a lot. And if you remember both junior high and high school without all of that communication, you may (like me) remember meetings in the woods or sneaking out the window or actually getting notes from a crush -- not a text. And to simplify, if you hated junior high, hated high school, swilled Boone's wine and bummed around abandoned houses while rocking out to Cheap Trick, you will relate. This may sound very, very wrong, but I hope these kinds of rebellion remain timeless. Over the Edge not only does, but is prescient for the future to come. But from Dillon to Spano to Cheap Trick (the thrill of hearing the opening of "Hello There" after Spano takes that shot -- it's just so exciting) well, man, rebelling ain't what it used to be. Actually, it's probably much of the same -- the sountrack just isn't as good.

So happy you wrote about this film. I've loved it since it ran endlessly on HBO around '81-'82. I think Andy Romano is very good as Carl's Dad, too.

(btw, my friends and I once wrote a song "Claude Zachary, Lawbreakin' Man")

I love this film passionately too. I've sometimes thought of it as a bookend/dark side to Dazed And Confused (also one of my favorites), they're both just so real.

Matt Dillon was a ton of fun in "My Bodyguard". Have you seen it? It always seems like the earliest works hold an innocence that mysteriously washes out of performances a more seasoned actor. Maybe it's the pressures to stay on top of the game filtering through the lens that is absent the actor in breakout roles to the big screen. The true 'greats' can recapture and resurrect the purity of their art even in the twilight of a film/stage career..(Paul Newman in "The Verdict" comes to mind).

Thanks Kim, for this brilliant justification of one of my longtime favorites, a super-relevant and inspiring movie which your words do fine justice to. And who else could? Some have their Paris or Casablanca, we'll always have the rec center with Claude, Cory, Carl and Richie, playing fusball, vandalizing Doberman's car, and rocking out with Cheap Trick, 1.75s of bourbon, joints and crude video music animation.

Reading your posts are making me poor! You write so well and so convincingly about movies that I find myself compelled to hunt down a copy (not always that easy here in New Zealand). Thanks, really.