MM: More Than the Silver Witch of Us All 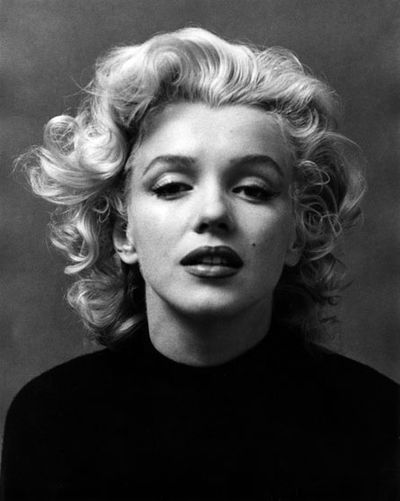 It's June 1st and, as always, I'm happily, sadly and at this point, superstitiously back to her again. Norma Jeane, Marilyn, MM, or as Norman Mailer called her, "more than the silver witch of us all" -- Marilyn Monroe. Every year I must celebrate with her -- it would feel wrong if I didn't. At this point, the very thought of not mentioning her makes me sense something terrible will happen. It's just a birthday, it's just my birthday but, it's something else too. So, June 1st. Today. She would have been 85 years old.

And as usual, her day makes me think of Montgomery Clift,  who, at least on screen, performed a heroic action for his beautiful fellow misfit -- he untied those damn horses. 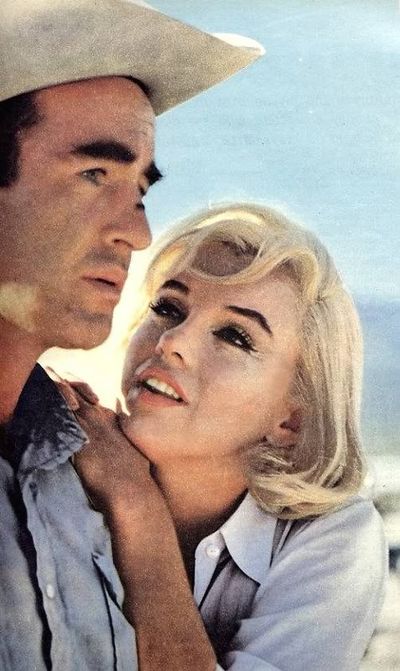 In John Huston's The Misfits, their only movie together, the two share a powerful kind of chemistry that is uniquely their own. World-weary and haunted, knowing and childlike, they're akin to the picture's fading cowboys. Both are movie stars for sure, but they reveal a gorgeousness that's a little worn, a little, almost, sick of themselves. It's painfully poignant to watch them at the end of the line. The movie reflected their own lives: As much as they enjoyed their status, and as talented and as lovely as they were, both might have wanted to hang it all up. 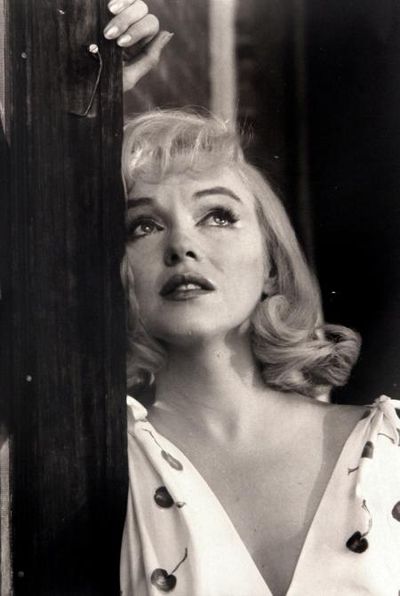 But then, did they really? And to do what? And with whom? What to do in this life except settle down with Clark Gable's cowboy? But is that such a great idea? Thinking that in real life, Monroe's author was her husband (Arthur Miller) and her character was inspired by her, it's tough not to separate how doomed all of this feels. Miller and Monroe would end it, Gable would die after making the movie, Monroe would slide into a pill addled depression and would soon, infamously pass away. And then Clift would follow a few years later. I always wished Monty and Marilyn (in the movie and in real life) would have run off together, no matter how unstable the match. Yes, both were probably too damaged, too self destructive, too complicated to take care of anybody but themselves and Clift was a tortured homosexual but ... oh maybe it could have worked. You feel it when Clift says to Monroe: "I don't like to see the way they grind up women here ... Don't you let them grind you up here." He doesn't just love her, he understands her. 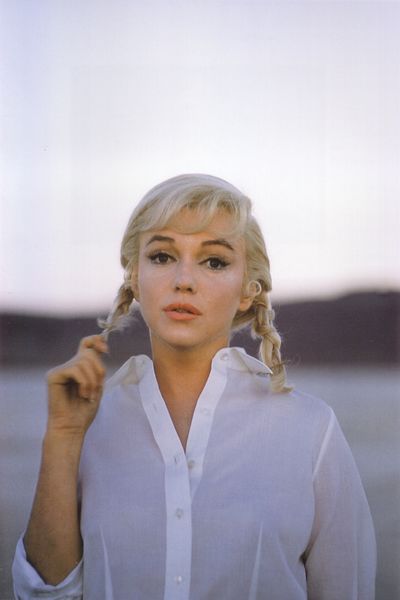 Especially when he performs the heroic task of untying those Mustangs for Monroe. I think because it's Clift and because it's Monroe that this noble gesture becomes so overwhelmingly moving, so eloquent. Yes, it's a movie, but again, I will eternally love Monty for saying forget the money and letting loose those horses. For her. 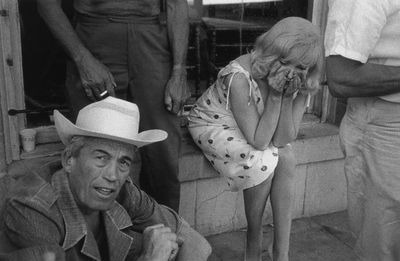 And I will forever love Marilyn. How can one not love Marilyn? So I return to my ode for her day, her birthday, the birthday of cinema’s ultimate fractured sex goddess.

Happy Birthday Marilyn Monroe, As I have written: 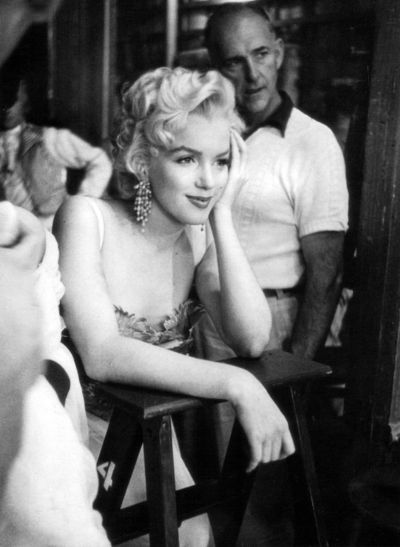 Despite all those coffee mugs emblazoned with her image, countless MM impersonators in their fluttery white dresses and so many sexy starlets naming her as an influence, she remains fascinating.

It’s not just that she died tragically and in mysterious circumstances though, that has certainly added to her legend. It’s not just for her famous husbands and her Happy-Birthday-Mr. President dalliances with the Kennedy's (something I've always found incredibly sad -- what else was going on there?). And it’s not just for her iconic beauty and glamour. 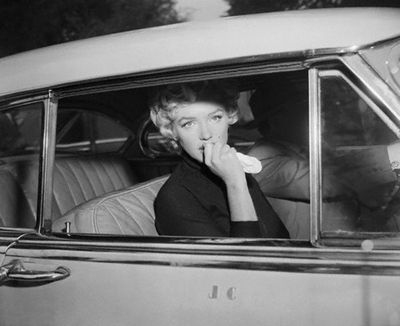 No, there’s something more to Marilyn that makes her continually interesting. It's all her now legendary tragic contradictions -- her messy, mixed-up life, her massive consumption of pills and champagne, her continual and final mental instability juxtaposed with her peaches and cream gorgeousness, her absolute command of the big screen (in spite of her problems with lines) and her ultimate, natural talent. It’s her ability, after all these decades, to still pop off the screen with such undeniable “It” that we almost take her for granted. Of course Marilyn Monroe is one of the most famous women in the world, who doesn’t know how wonderful she is? 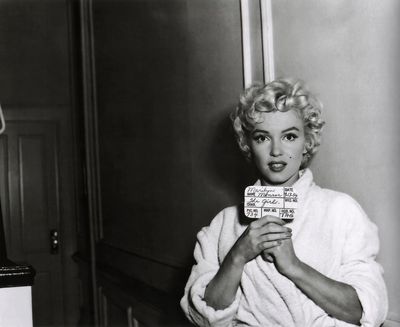 But then, watch her again perform “Diamonds are a Girl’s Best Friend” in Gentlemen Prefer Blondes with effortless charisma and cleverness, observe her studied, but certainly real and powerful end-of-the-road melancholy in The Misfits (and every scene with Montgomery Clift - her beautiful brother in brilliance, and never-ending ennui), enjoy the Freudian fantasy -- the erotic fun she’s having in The Seven Year Itch, think about all that sexed up sadness from Some Like It Hot (and yes, she makes you actually think about it: "I'm through with love, I'll never love again ..." at that moment, she really means it). Further, view her va-va-voom bad girl in Niagara, her tragic, heartbreaking instability (of which she could surely relate to in real life) in Don't Bother to Knock, her jeans-wearing authenticity in Clash By Night, and revel in her garish vulnerability and sweetness (and my God those beautiful close-ups) in Bus Stop -- she is just. So. Wonderful. 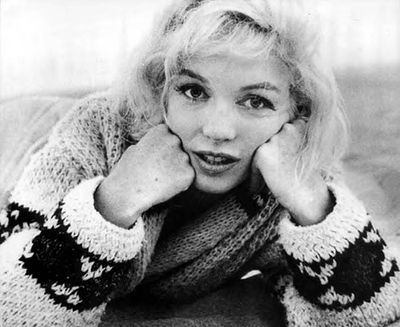 I had a thing for MM ever since I was a little girl (we were born on the same day). I even composed a slightly scandalous speech in the 7th Grade proclaiming the movie star was murdered (I think she ended her own life now, by accident or on purpose. As I go through life in general, and see how mentally sick this town can be, I better understand why she felt so alone). But even without young conspiracy theories, most little girls love MM in some way, especially those obsessed with movies. My love would would reignite later in life after I watched nearly all her films by high school and moved on to other celluloid icons. Rita Hayworth, Jean Harlow, Bette Davis, Barbara Stanwyck, Veronica Lake, Tuesday Weld, Brigitte Bardot, Lana Turner, Hedy Lamar, Louise Brooks, Gene Tierney -- the list could go on and on and on -- I’d work through all of their movies before watching Marilyn yet again. But I always came back to her. Like re-reading a great novel or play, you understand her better with age. 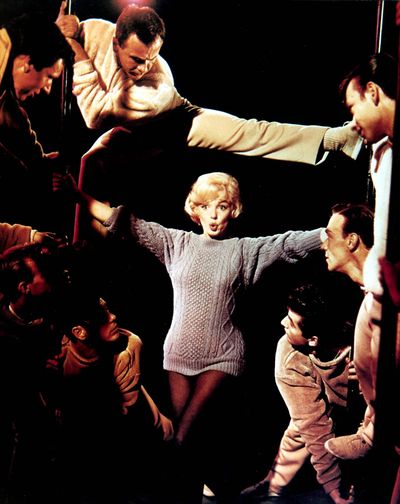 And though people love to discuss Marilyn Monroe the underrated actress (which is true -- she was a great comedienne and a potent dramatic force ), rarely do they argue about MM the underrated singer. As proven in Some Like it Hot, Gentlemen Prefer Blondes, River of No Return, Bus Stop (oh lord...her sexy, warbled, scared, ripped fishnet version of "That Old Black Magic") and the less classic Let's Make Love (where her rendition of "My Heart Belongs to Daddy" is one of the best versions of that song ever recorded), the woman had distinct pipes. 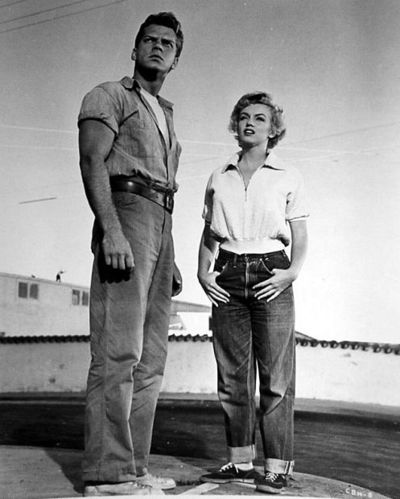 Again, I realized later in life that I favored Marilyn both early in her career, when she was so fresh and un-mannered in films like The Asphalt Jungle, All About Eve, Don't Bother to Knock (in which she's brilliant) and one of my favorite MM performances, Clash By Night (Marilyn slopping around in jeans eating that candy bar! So natural, so her.) 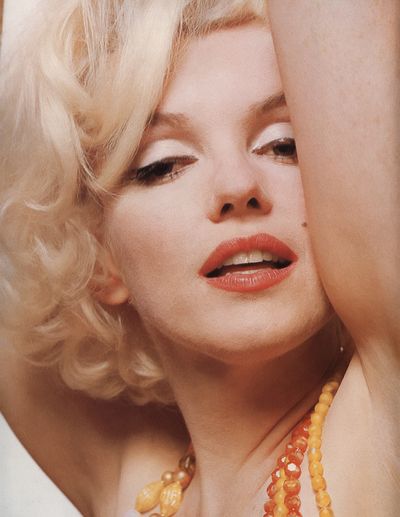 I adore her work during her so-called decline, like her odd glamour-puss beatnik performance from Let's Make Love, her sad eyed, superb method style in The Misfits and the absolutely mesmerizing bits and pieces I’ve seen of her in the ill-fated Something's Got To Give. She looked so stunning, so fit, who would think she was to die mere months later? To me, this makes her all the more stronger. Who looks like this while so tormented? Who sings to the president? Who dives into such a gleefully delicious nude swim? 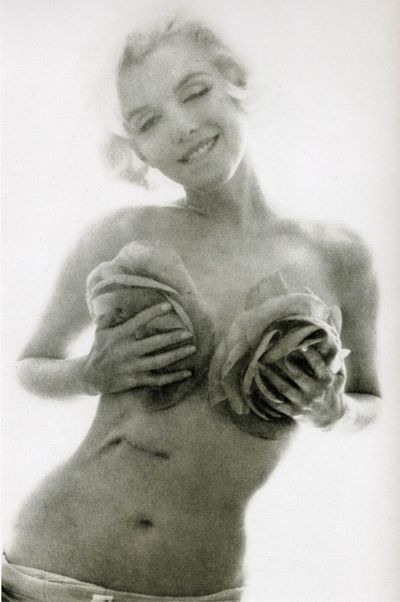 I also became even more fascinated by her later photo sessions; especially Bert Stern’s final sitting and George Barris' beach shots. MM is less made up, wearing simple clothes (if you ever look at the Christie's book on her auction, you'll notice how basic her personal style was) and you notice her skin aging, her fascinating flaws -- you can even see her possible appendectomy scar (one is not sure what happened). But there is something so fantastically real, morbid almost, about these pictures. She looks a little modern (I always think of Debbie Harry or what Edie Sedgwick might have aged into when I look at these), very drunk and wonderfully rough around the edges -- less the big eyed-blonde and more the world weary movie star. 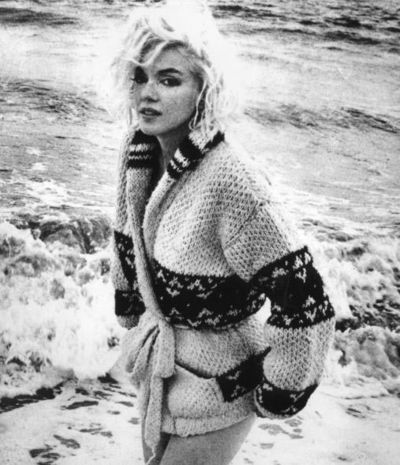 As Norman Mailer wrote of her in his perceptive ode Marilyn (so much better than Gloria Steinem's victim-oriented  tome -- Mailer understood Monroe's sometimes complicit nature thereby making her no dummy) she was, “a female spurt of wit and sensitive energy who could hang like a sloth for days in a muddy-mooded coma; a child girl, yet an actress to loose a riot by dropping her glove at a premiere; a fountain of charm and a dreary bore … she was certainly more than the silver witch of us all.” 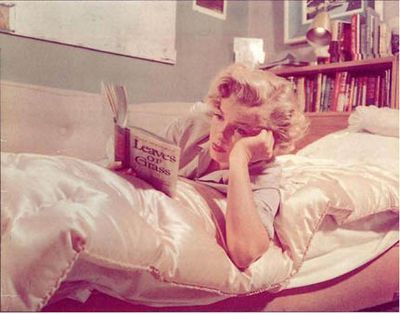 Yes. Lying on that mattress on the floor in that modest little house at the end of her life, so many women (and men too) can understand and/or relate to her sadness -- and so many can see what demons led to her demise ... and yet, she remains mysterious.

And though she may be ultra ubiquitous she also remains important. Sexy, breathy, objectified, so-called dumb blonde? Someone's got to show them how to do it. And perhaps even more important, someone's got to reveal so much joy and pain yet remain so very specifically enigmatic. The dark fantasy of blonde light. 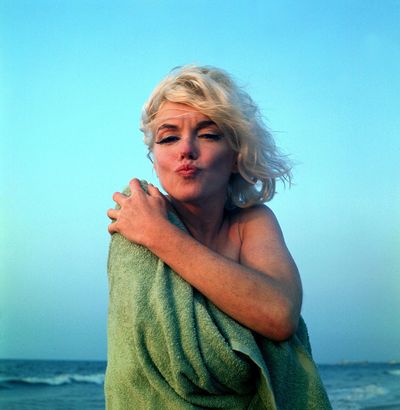 Someone had to be the movie star.

Now, I have avoided all cracks, walked around ladders, shooed off the black cat and will think of you, wondering about the years you didn't live to see. If I could, I would most certainly untie those horses. Jesus, Marilyn, when will this end? I'm stuck with you and I think we've got a long way to go. I hope so. As always and forever, Happy Birthday Marilyn Monroe.

Fabulous post. I wish I'd written it! Happy birthday to you!!!

A beautiful tribute, I was seriously moved.

Great essay. Belated happy birthday! I read somewhere that Marilyn once sympathetically said of Monty Clift: "He's the only person I know who is more messed up than I am."

I love that you mentioned MM's skill as a singer. She could sell a song as well as Fred Astaire. Her version of My Heart Belongs to Daddy holds a place in my heart right next to the version by Ella Fitzgerald (I will never pick a favorite!)

The lady is still the original and the best,she was never more beautiful than when in "The Misfits".Nice tribute Ms.Morgan.