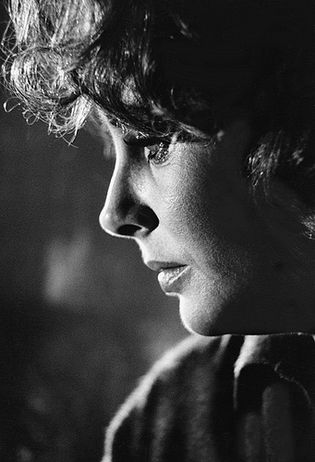 The passing of Elizabeth Taylor at the too-young-for-Liz age of 79 is such a loss; it's tough to describe her death without resorting to prose that mirrors her legendary eyes -- purple. So, I'll just say right here, briefly, and in all caps befitting the occasion: RIP LIZ. SAD. BOOM!  Oh, Liz! (And I haven't even discussed your brilliance in Boom! yet) What a sad day. Your cat, Maggie and your hellcat Martha, will always be alive. 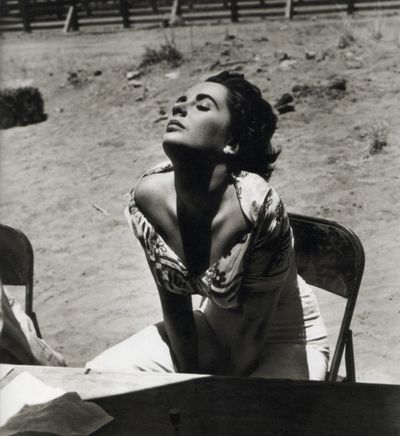 Taylor was an iconic movie star, a gifted, often brilliant actress, an astonishingly beautiful woman, a trend setter, an activist, a lover, a fighter, a perpetual marrying kind and, in one of her greatest roles, one hell of a drunk. Which naturally brings me back to Martha, to Who's Afraid of Virginia Woolf, a movie a perceptive film professor told me I should watch every three years of my life. Why? Because I'd understand it better with each viewing. 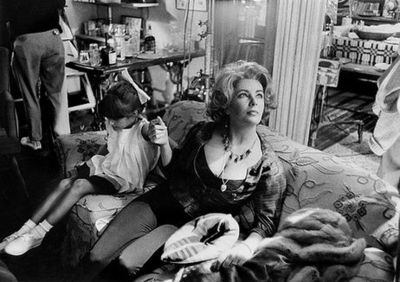 Perhaps horrifyingly (to some, not me), but ever so poignantly, he couldn't have been more correct. Mike Nichols' debut film, the adaptation of Edward Albee's searing stage play, is a blisteringly real portrait -- a living, breathing, spitting depiction of the destructive and at times, psychotic battle between an aging alcoholic couple intent on outdoing each other. And not through pure violence (though violence does occur, and indeed, Sandy Dennis will clap her hands at the prospect: "Violence!"), but through clever, wickedly malicious verbal gymnastics that feel violent. And it's a movie that some of us, whether coming from a similar family dynamic, or venturing into our own interpersonal incorrigibility can often relate to -- at any age. But oh yes, it does dig in deeper the older you get. 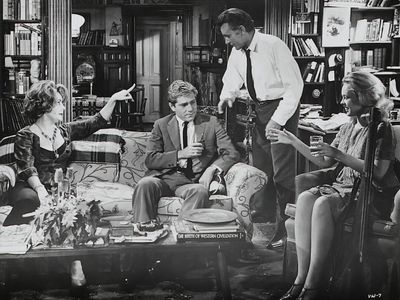 A shocking picture for 1966, the film was an expletive-ridden salvo that frightened some and impressed many. So notable was Woolf that the picture that was the first to use the words "goddamn" and "bugger" went on to Oscars galore, earning Elizabeth Taylor a richly deserved second Academy Award. It also garnered Sandy Dennis a Best Supporting Actress Oscar, a win for Haskell Wexler's gorgeous cinematography (he was the last to win for a category that doesn't exist anymore -- best Black and White cinematography). On top of those accolades, the movie was nominated for Best Picture, Best Actor (Richard Burton), Best Supporting Actor (George Segal), Best Director (Mike Nichols), Best Screenplay (Ernest Lehman), Best Sound, Best Original Music Score (for Alex North's at times gentle, haunting score), and Best Film Editing. Though Oscars are no barometer of greatness, they can point out a certain zeitgeist. This one? Mr. Burton referring to Miss Dennis as "monkey nipples." 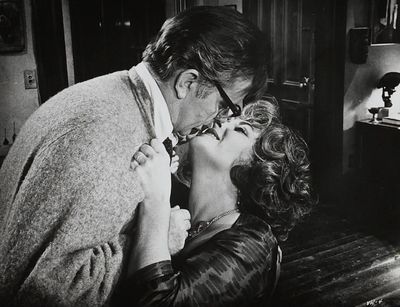 Though Bonnie and Clyde helped kick-start the emerging '70s cinema, Virginia Woolf was a formidable front runner and, in a few ways, more disturbingly violent. In it, words and deeds are doled out with a ferocious vitriol that remains unmatched -- at least in terms of eloquence. Nothing so nasty has ever been so sickly beautiful. It certainly helps when Liz is slinging the sadism. That this still beautiful, still young woman would dress herself down to mean-mouthed, muffin-topped middle age was brave enough -- but her words and actions -- funny, terrible, sad and at times, strangely sweet, showed that Taylor truly understood this woman. 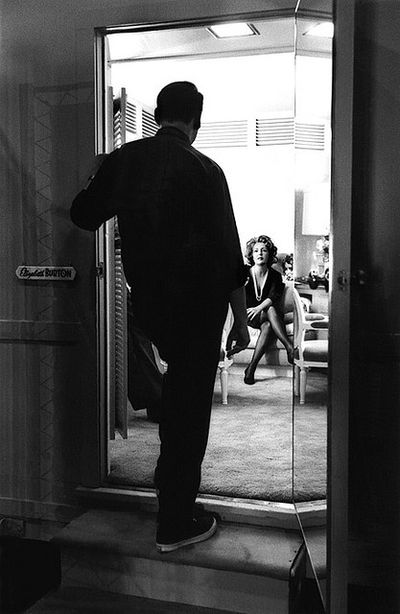 And dammit if Liz's dumpy, yet oddly sexy and potently poignant drunk and Burton's broke-down "bog" aren't beautiful losers. Yes, beautiful. Never mind how toxic they make their lives. Beginning with a gorgeous title sequence during which we watch History Professor George (Burton) and his saucy and sauced wife Martha (Taylor) walking back from a function drunk and cackling, the movie immediately places us in their dark, disconsolate universe -- one of shattered hopes, nihilism, and dipsomaniacal game playing. To George's surprise, Martha is expecting guests (at such a late hour) and, after their return home where she famously utters the Bette Davis line "What a dump" while harping on George about a movie: "What's the name of the picture?" (I'm always happy I know the name of the picture. It was the misunderstood, borderline brilliant King Vidor camp-fest Beyond the Forest). She eats chicken (she really devours that drumstick -- and it's all kinds of beautiful), calls George a "cluck," and they booze it up. And booze it up. And booze it up. And then come the guests. Opening the door to a couple of young, unsuspecting colleagues, well, oh my. These two have no idea what they're in for. 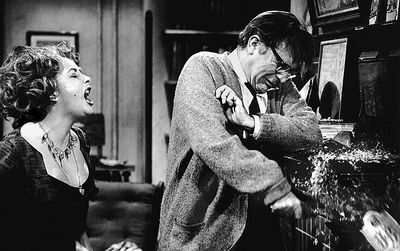 Nick (Segal) and Honey (Dennis) are attempting to be cordial, but since Martha's father holds weight in the university, Nick's going to sit this one out, no matter how weird, no matter how sexual, no matter how "Georgie Boy!" it gets. And the two-hour party (in movie time, the picture takes the group into the wee hours) goes beyond weird -- it enters a vortex of nasty, though sometimes wistful revelations for both parties. The two couples become increasingly sauced, and move their action to a nighttime bar where a vulgar dance breaks out between Nick and Martha (Oh how I love this dance). 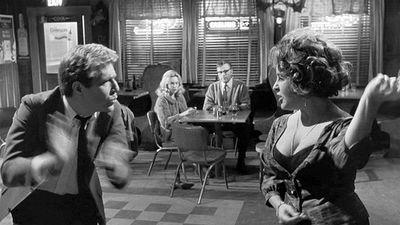 Things fall apart. The center cannot hold -- just the way George and Martha like it. Nervous Honey admits she yearns for a baby. "Well built" Nick admits his wife (whom George calls "slim hipped") had a hysterical pregnancy. George recalls a tragic story of a child killing his parents that's probably about him. And Martha, well, she pulls out the big guns by bringing up the "blue-haired, blonde-eyed" kid (the game, "Bringing up Baby"). And that is quite enough -- George digs in his claws once and for all. 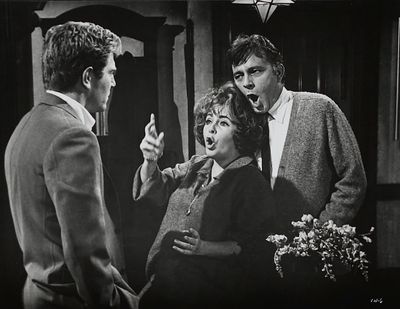 With such substantial, fearless performances, and Nichols' active, observing camera, the picture attains a visceral power that leaves the viewer both raw and transfixed. There is little respite from these character's actions, and even moments of humor are soon met with yet another discomforting bout of disgrace, cruelty, or sadness. 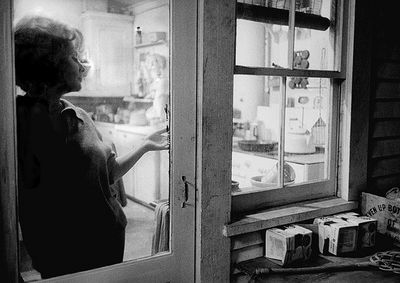 But it never becomes sickening; on the contrary, there's a sense of nobility to this movie that's unusual for its often-crass subject matter. And once we make it through this harrowing night, we learn that there's a lot of love between dueling G and M. George and Martha may be poster children for extreme dysfunction, but they are indeed meant to be. And there's something oddly romantic about that. By film end, I am firmly on their side. All these inane romantic comedies are supposed to make you feel inspired by love. Not me. I'm pro-George and Martha. I want them to never lose each other -- ever. Have another drink and stick it out with your "quietly noisy relaxed intensity." It's a shame that the real life Martha and George, Liz and Dick, could not make it work. But God bles them, they tried. They tried. Twice. 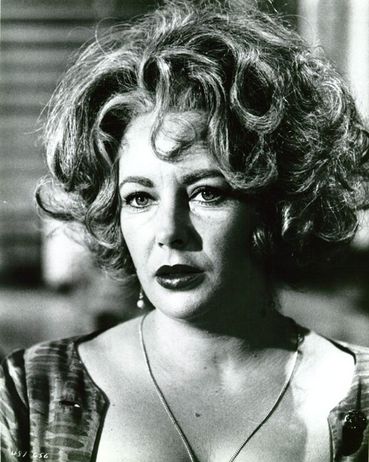 So my professor was right. Watching the movie every three years does deepen the experience. And in my perhaps, perverse case (I've been watching the thing about once a year since then), I feel a sadness, nostalgia and fondness for George and Martha. And especially today, as Liz has left the building. Again, there's something heroic about their dissipation. When Martha sticks up for George after her indiscretion with Segal ("Him can't. Him too drunk.") and the broken-down couple take to calling Segal "houseboy, well, at that point, I get it. Quite simply, I love George and Martha. 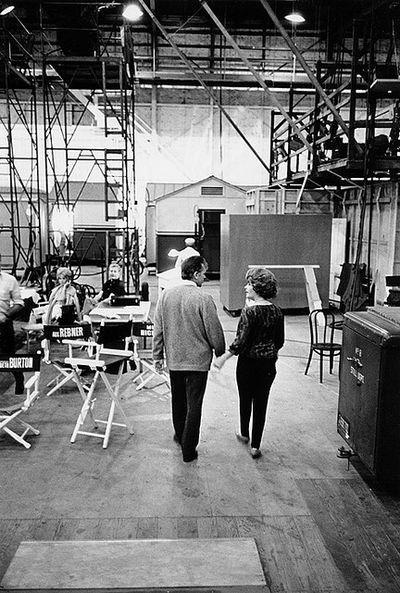 Grab yourself a perfect, healthy relationship, fine. As I'm sure Miss Taylor would say, "Good luck." But if you never discover that rare thing, and if you've found your soulmate, then, I say, get the guests, get the booze, get the blue haired child, get the monkey nipples, get the "Sunday Chapel dress" and get on with it. After all, Martha's "thirsty."

How lovely. Thank you for this. My favorite role for Liz--she gave it everything she had and probably a lot more than she realized she had. A very excellent star.

Beautiful piece on Liz and Virginia Woolf. I've watched the film many times, but stopped for a long stretch and then saw it a few months ago on TCM and it didn't lose anything - it only gained power. It does change with age. I put up my favorite clip of the film here:

Lovely piece, Kim. I just saw the film for the first time, too. I am in full agreement when you say, "...there's a sense of nobility to this movie that's unusual for its often-crass subject matter." This is mirrored in Haskell Wexler's last shot, the zoom-in to G & M's clasped hands and then past it to a beautiful sunrise (all while we hear Alex North's beautiful score).

Really enjoyed this piece of writing on a great movie. Thanks!