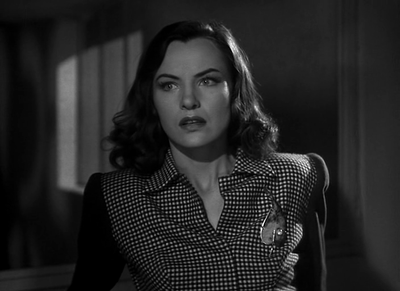 There's a dangerous, sickly titillating sexuality to film noir that's not seen enough on screen these days. That thrill, that edge, that mixture of sadism and masochism, that passion, that cold-heartedness, that control and abandon. I'll speak mostly of the genre's women: Peggy Cummins coolly shooting between her legs in Gun Crazy. Decoy’s Jean Gille laughing with maniac, orgasmic glee after she’s offed her duped boyfriend who’s just dug up the only thing that turns her on -- money. 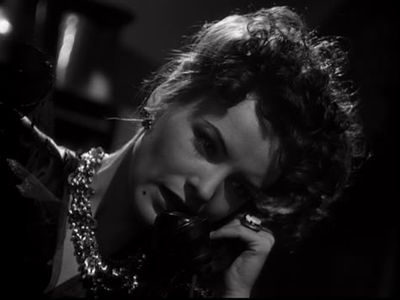 Cloris Leachman running barefoot down a two-lane blacktop and then panting and hyper-venting over Nat King Cole’s silky opening song in Kiss Me Deadly. Rita Hayworth's Gilda, who uses her considerable sexuality for her only clutch of power and then, is made miserable by it. Richard Egan getting an eyeful of beautiful six foot Wicked Woman Beverly Michaels -- a femme fatale who actually falls in love and is, of course, left alone to continue her manipulations in the next dumpy town. Lawrence Tierney tossing and turning over Claire Trevor, wanting to rape, murder, kiss, kill... and she wanting it to. And, dear lord, Lana and that lipstick in The Postman Always Rings Twice. The look John Garfield gives Lana when that tube of red rolls across the floor is worth a hundred contemporary sex scenes. 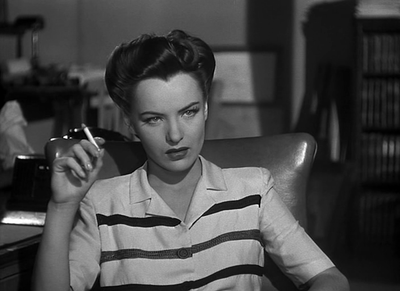 Film Noir reveals complicated sexuality that's not just dishy dames in sexy high heels or snappy men in fedoras. It's screwy sexy, often populated by losers (attractive losers) made all the more erotic because even as sex, often toxic sex, motivates many of its character’s actions, the genre’s aim isn’t merely to steam your glasses. It can serve (directly or indirectly) as allegory for many of the power struggles we may endure in the tumult of relationships. If they're easy, they're usually boring. If they're hard, they're usually worth questioning. If they're hot and hard, they're nearly impossible to put down. If they're causing you to saunter into situations that sicken you, you're in mad love. Or a masochist. Usually both.

Which led me to a movie I hadn’t seen in years -- Robert Siodmack’s Phantom Lady -- a picture that features a performance by Ella Raines that’s so sizzling, so, at times, sick and yet so alluringly poignant, you’re a little overwhelmed by it.

Adapted from the Cornell Woolrich novel, Phantom Lady was Siodmak’s first American screen success and he would later craft some sublime noir including Criss Cross, Cry of the City, The Dark Mirror, The File on Thelma Jordan and The Killers (among others). I’ll run down the story: Ella Raines (her character’s nicknamed “Kansas” -- which seems like a Wizard of Oz reference given the subterranean world she will find herself in) works as Alan Curtis’s secretary. When he’s framed for the murder of his wife, she sets out to help him because she doesn’t believe he did it. She's also besotted with him (lucky man). Sexing up her image as cub private dick, she’s off to find this “Phantom Lady” with the help of Curtis’s friend (Franchot Tone) and an off duty police detective (Thomas Gomez, so wonderful in Force of Evil). OK, so that's the story, but what I really want to discuss is Raines's interaction with the hep cat, hopped up jazz drummer, played by noir staple, the great sap/sleaze Elisha Cook, Jr. 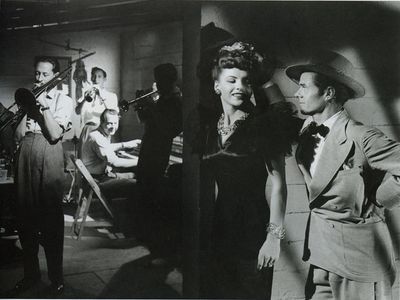 I am absolutely gob-smack over their famed moments together. Ella’s seduction of Elisha -- a freaky sexy, conflicted, crazily drugged sequence (you can practically smell the booze, marijuana, heroin and dexies permeating the joint) in which Raines plays hot-to-trot, seems to be eating up her vampy method of getting to the straight dirt and yet, is repulsed by both Cook (that kiss!) and herself for having to go this far. 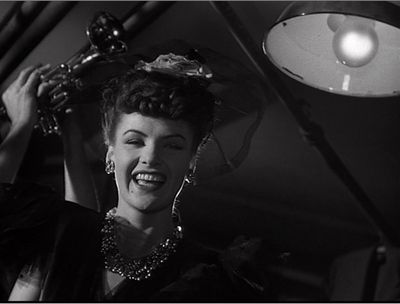 Showcasing Siodmak’s (and cinematographer Woody Bredell’s) evocative, angled compositions (used gorgeously throughout the movie), the style brilliantly underscores the mounting hysteria and varied state of Raines’s psychology. This is an extreme example, but what Raines reveals is something many women feel when finding themselves in the belly of the sleazy beast. It's a little fun and a little horrifying and you're definitely not in Kansas anymore.

Great post and one with which I completely agree. Classical noir is quite sexier -- yes, "dangerously sexier" -- than most of today's movies. This is something I've attempted to explain to my film students via DOUBLE INDEMNITY and BODY HEAT; sometimes they get it, other times, not so much. I've written further on this class discussion here, if you're interested: http://kellimarshall.net/unmuzzledthoughts/teaching/doubleindemnity-bodyheat

Thanks again for an interesting read!