To Be Perfectly Frank

"He's the only man in town I'd be afraid to fight for real. I might knock him down, but he'd keep getting up until one of us was dead."

I almost forgot entirely. Bing might be the personification of Christmas, and Dean may have passed on that very day, but Frank was born with Christmas tunes ring-a-ding-dinging through his tiny fontanel. That's Frank, as in, Francis Albert Sinatra, born Dec. 12, 1915. The famous birthday came to me after spending two solid days listening to Gram Parsons, Kris Kristofferson and Neil Young, realizing I was slipping into an alt-country music coma from which I might never recover. Enough. Needle and the damage done. Not that I don’t love the above artists (Young's "Pocahontas" is a song will, like, the Bad Lt. make my soul dance even after I've left this earth...), but after moping through “Love Hurts” and “The Silver Tongued Devil” like a brown turtleneck, jean-jacketed sad sack -- I needed a change. In went a movie, up came the croon "If they asked meeeee, I could write a book..." and I was no longer in the rust-tinted musical state akin to sitting in the back of my mother’s pine green station wagon after she signed the divorce papers. I was now swathed in furs and jewels and crying in my Eggplant Parmigiana, preferably from Patsy's, one of Sinatra's favorite joints.

Coveting Frank Sinatra is nothing new. We all witnessed the early ‘90s retro embracing of Ol’ Blue Eyes by younger fans, mostly genuine but for some with a Tiki Torch irony that grew as tiresome as Bettie Page bangs and China Doll wigs. But one can’t allow hordes of obnoxious cigar bar patrons laboring over the malt of scotch ruin the party. Frank is timeless. If you don't get it, you don't get it. And if you don't get it, I don't get you. Nothing can cease my warm memories of Sinatra. There's my stoic dad singing “My kind of town, Chicago is my kind of town” while rolling in his powder blue Caprice Classic. There's the time I stayed home "sick" from school and caught A Hole in the Head on channel 12 (oh, the excitement of happening upon an old movie as a kid). And then there was the day I actually saw Sinatra at a State Fair -- it was the only way I could see him (and I convinced an older boy to drive me up there. He was annoyed but, after putting down  his Bukowski poems and watching Frank sit center stage, singing "One for my Baby," weaker, but still oozing with soul, he became a Sinatra devotee. He can thank me for that.). To top it off, a fantastically ribald and still gorgeously leggy Shirley MacLaine (the "mascot" as the Rat Pack called her) opened for him. This is a show I'll never ever forget, with, among other highlights, Frank singing "Mac the Knife" replacing Mac with himself. And when Frank Sr. sternly instructed Frank Jr. to start the orchestra all over again after he flubbed. But that was then and this is right now as I watch Pal Joey -- a movie that just saved me from sewing a rainbow patch on my Levi’s or thinking far too long that Jim Croce needs closer consideration. Or reading anything about the Manson family.

Humphrey Bogart once said of Frank Sinatra: "Frank's a hell of a guy. If he could only stay away from the broads and devote some time to develop himself as an actor, he'd be one of the best in the business." Bogart's opinion of his friend's screen talent was on target, but I can only think, thank God Sinatra never took the time, or rather too much time, to "develop himself as an actor." He didn't need to. Studying the craft could have stultified the magic he displayed in some of his most memorable performances.

When it came to acting, Sinatra was a natural. Like Dean Martin, Sinatra was one of those fabled one-take wonders who preferred his freshest read, to tackle his magic head-on. But he wasn't necessarily against rehearsal or research, especially for meatier roles. For Otto Preminger's The Man With the Golden Arm, Frank actually studied the frenzied state of drug withdrawal to play his heroin-addled jazz drummer Frankie, (one has to assume he knew a few junkies as well) and a more complicated Frank graced other impressive films including John Frankenheimer’s classic The Manchurian Candidate (Frankenheimer told me he would not allow a one take), Vincent Minelli's masterpieces Some Came Running and Fred Zinnemann's moving, sexy, wonderfully overwrought From Here to Eternity, which earned Sinatra an Academy Award for his downtrodden little guy Maggio.

All of those performances were excellent, but there were other actors, gifted actors, who could have performed a few of them (though Sinatra did bring something special and un-matched). Eli Wallach was set to play Maggio (and he’d probably have done an equal job...but maybe not), but because of either the oft-told Mafia legend or his own talent, Sinatra landed the plum part. And then, Sinatra was in the running for Marlon Brando's Terry Malloy in Elia Kazan's groundbreaking On the Waterfront -- this could have been interesting but certainly not as brilliant, not in the I coulda been a contender way (and let's not forget the erotic scene with the glove). I adore him, but regardless of Sinatra's chops, he couldn't have matched the raw, soulful intensity of Brando. But then, in another instance, Brando couldn't entirely do Sinatra -- as witnessed in their shared screen musical Guys and Dolls. Brando, gorgeously cast as gangster Sky Masterson is an almost crazy experiment, so when he sings "Luck Be A Lady Tonight" all mysterious, sexy and quirky, he gives the song an intriguing, bizarre-o, Brando edge (I actually love Brando's languid, strange version). But come now. Truly, the song was tailor-made for Sinatra.

Proof positive was when Sinatra later recorded the song -- he not only sang the tune, he grabbed it by the hair, (as he probably wanted to with Brando's face), dragged it to the bed, tore off all of its clothes and attacked it. With his witty, gritty, punctuated and smooth singing style, Sinatra still sends shivers by singing the lyric, "A lady doesn't wander all over the room and blow on some other guy's dice." You can practically feel the cocked eyebrow through the vinyl of the recording.

But perhaps Sinatra's greatest role was one that didn't involve a beat down a la Maggio, or require the harrowing pain of drug dementia a la Frankie. No. To return the movie flickering in front of me, a movie I've watched numerous times, one of Sinatra's best role was as the gigolo lounge singer Joey Evans in the underrated (though overly scrubbed) screen adaptation of John O'Hara's epistolary novel and subsequent Rodgers and Hart stage musical Pal Joey. For those who prefer Sinatra after his crooning bobby-soxers days, and before the disappointing Duets project, Pal Joey is quintessential Sinatra. I love Frank a little older, a little filled out, and with that hat. Oh, he wore it well. 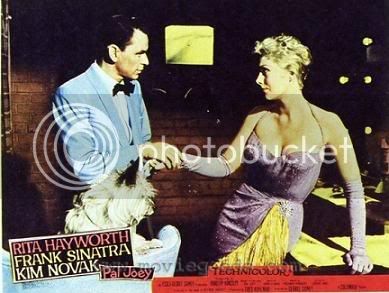 The definition of lovable cad, Sinatra's Joey Evans is all swagger and crass class. But he's talented, and the ladies cannot resist his goomba, plain speaking charms. When he's hired at a San Francisco nightclub, he beds nearly all of the girls on the chorus line (he calls them "mice") with the big (very big) exception of the luscious, mysteriously melancholic Kim Novak (even when she smiles, the lavender lady is sad, nearing the mournfulness of Chet Baker with her wrist-slitting take on "My Funny Valentine"). Sad or not, she is, as he puts it "the mouse with the built." Feminists may not revel in Joey's tomcat antics, but they might at least feel vindication for his stereotypically female role: Joey uses his voice and body to milk older gals for money. In this case, the still beautiful Rita Hayworth whom he's hustling for a club he'll christen "Chez Joey."

But since the movie version is something of a fantasy, Frank's cad is more than a mere smooth operator, he's a bona-fide musical genius, which goes a long way when when wooing a mouse like Rita Hayworth. And so, with his rendition of "The Lady Is a Tramp," he drops a musical masterpiece on the woman, giving viewers one of the sexiest on-screen musical sequences ever filmed. Singing to Hayworth in a closed nightclub, Sinatra sits at the piano and casually begins his song, tossing it out there as easily as he instructs Novak's dog to get out of his drawer (he says "Off! O-R-F"). He snubs out his cigarette and kicks the piano back (all in wonderful punctuation to the tune) and builds the song towards full tilt Frankness. Skulking across the stage, he crafts the tune so brilliantly, and with such amazing timing, that near the finale, he ends the regularly sung lyric "she broke, but its oke," with "she's broke..." and...no words, just a casual shrug of his shoulders. We don't need to hear if she's O.K. or not. She, he, anyone, would certainly be "oke" by then.

It's just so glorious -- slinky and earthy, nasty and sweet, stern and cool. Blue-eyed devil mean (and those eyes could look mean) and then joyously, shout it to the rooftops soulful (those eyes could also look so poignant). And so goddamn Frank. No performer at any time could have played and sung this scene with the genius of Sinatra. In Pal Joey. Sinatra is rascal, cheater, charmer, lover...a man whose philosophy was to treat a "lady like a dame, and a dame like a lady" -- which still works today. I’m certain that Kris Kristofferson would have to concur.

Splendid post. I recently reread Shawn Levy's Rat Pack Confidential which is a belter of a book.

Great Post. I am feeling very good after reading your post. You have written very good. Thank you very Much !

My favorite Sinatra movie up until recently (Some Came Running is threatening it) has always been The Tender Trap. Something about his Smoothness up against Reynolds Innocence brought the best out in both of them.

A Teacher showed us about half of it, one day in Jr. High, and it was YEARS until I got to see the rest. Wasn't disapointed though. Its a shame that movie tends to kind of get forgotten.